DIY Fails So Hilarously Bad They Deserve an Award | 22 Words 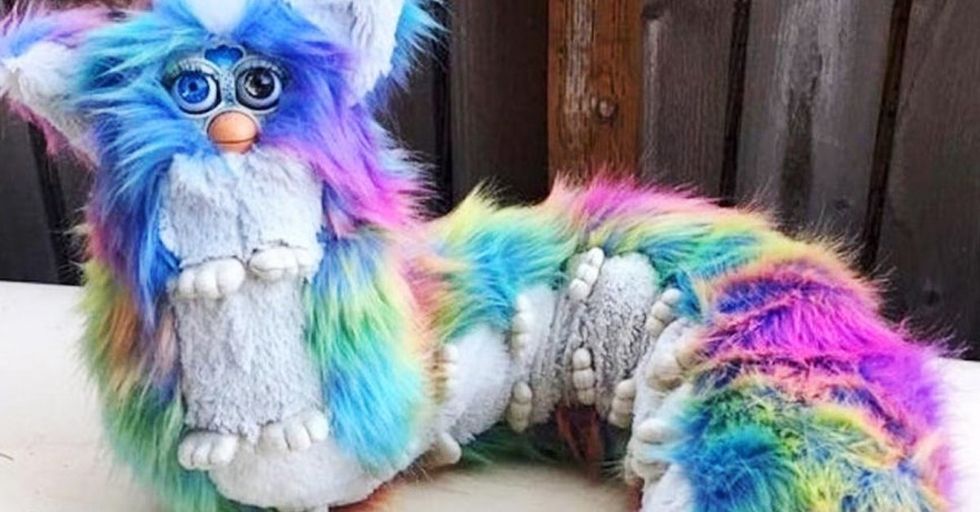 DIY Fails So Hilarously Bad They Deserve an Award

It's a badge of honor when you're able to make something yourself. For instance, one time I made a bird-feeder out of nothing more than a pine cone, birdseed, and peanut butter! But that new creation at least had a purpose — my bird-feeder was meant to feed birds. These DIY fails we've collected here? They are... well, they're insane. Bonkers. Completely out of control.

These DIY fails will make you scratch your head, arch your eyebrow, and ask, "um, why did you make this?" We can speculate all we want — are they inventors? Maybe they lost a bet? Maybe they can see what we can not, a la the Wright brothers or Steve Jobs? — but at the end of the day, these things are a lot of fun to look at, even if they're as foreign as air travel and the iPhone must have appeared when the masses first took them in.

"We're down here in the trenches, sarge!"

What do you do with your melted toy soldier bowls? Serve mixed nuts or tortilla chips? Somehow that seems disrespectful to the troops.

Fits nicely in your palm.

Now, this post's title was "My Mom Tried to Make a Cane For My Dad," so I don't ant to judge too harshly. But it does look like she just sawed off a piece of the railing from a patio staircase.

Hey, we all love a comfortable toilet seat, so the idea of using a toilet cover shouldn't be so shocking. But this... this is an affront to all that is good in the world.

At least she made something, which is more than you can say for most aspiring novelists.

The title of this post did break my heart a little bit though: So I posted this on /r/Pics and I was really proud of it and someone said this is bad I should feel bad and post it here on /r/DIWhy. So here I am. - injaneinthemembrane

But gross and impractical!

This one blows my mind. Why even bother with shoes if you're not going to have a sole? That's the whole point of shoes.

What is anyone supposed to do with this?

Even if you're the biggest fan of strawberries in the world, I don't know what you'd do with this massive styrofoam strawberry. Put it up on a shelf? Who's going to be impressed by it?

That's just one more knife you have to wash.

or Or OR YOU COULD JUST TAKE OFF THE LID YOU INBRED. - Improvis2

Do we know what the point of a sunroof is? Do I?

Why is this person faking a sunroof as though they were some kind of status symbol? Are they a status symbol? Should I put a fake sunroof on my 2001 Saturn LS2? Is that why the country club hasn't accepted me in yet?

For the fashion-forward girl who wants to make her friends go "yuck."

Two options here — either that pair of underwear is brand new, in which case, you're buying it from a store that presumably also sells tops you could just buy, or that underwear is not new, and... well... yikes.

I don't even get the thought process here.

So, now you have a Coke bottle that can display matches and cigarettes? This isn't even mimicking a cigarette stand, mainly because that's not a thing we have. Just bizarre.

Got to admire the ingenuity.

As the owner of a 2001 Saturn LS2, I've never given much thought to the status afforded us by car add-ons, but hey, if wide rims are important to you, this will work in a pinch.

I'm going to be thinking about what decisions this man made to end up with a truck bed that looks like this for about, oh, I dunno, the rest of my life.

They make chairs for that.

I know, I know — chairs are usually for inside. But there are these great foldable lawn chairs — as in, chairs specifically for the lawn — for people who want to sit outside.

Oh, I remember this! From all my nightmares!

The article's title: How to Turn a Beloved Furby Into a Cuddly Centipede - SlowlyDriftin_

Is anyone else's mail hot on the outside but still frozen on the inside?

And the first comment: And why is it plugged in. - emmawiiwiiwii

Dad's got some artistic talent, I see.

As if nails that sharp aren't scary enough (you can be sliced by them at any second), you've got to add a bug too?

This is cool, but wait until you see my 2001 Saturnest Hemingway.

No way is this ring not being used by a witch to conjure some sort of spell. Otherwise, whoever made it could have just not used a human tooth, like most ring-makers.

For those who are both anti-authority and anti-ugly lawns.

I can see how this might be useful for men who both need to keep up their lawns but also has a powerful urge to rebel against "the man."

I'm just at a loss on this one. These steps could not look worse. And now you just know there's someone running around half-naked because all their pants are on their stairs.

Future so bright I gotta cut out shades.

As someone who's watched more than a few cheap sci-fi movies from the '80s, I know that we will all one day have visors over our eyes. I would be willing to bet, however, that they will not be DIY, but instead manufactured by a corporation with a name like SpaceCorp or Lasers Incorporated.

I would like to never sit on this, if possible.

Between this toilet seat and the bug nail, is there some sort of DIY trend involving adding bugs to things that don't normally contain bugs?

Look, they probably laughed at the first guy who said "I'm going to make a chair for the lawn" too.

My boy put hand sanitizer on his desk and tried to cook spam in his dorm. - craycrayeyeliner

I can taste this, and it's not good.

I don't care how hard you're scrubbing that empty deodorant bottle — there will be residual deodorant in it and if you freeze Kool-Aide and eat it you will be eating deodorant.

Have you ever been camping deep in the woods, only to find your banana fan has stopped working? No one wants to be n that spot, so I actually find this one useful.

Are lawn chairs some sort of symbol of privileged?! I feel like having lawn chairs isn't a big deal! My family had a lot of lawn chairs! Just go buy lawn chairs? Am I going crazy here?!

... Game Boys don't need stands. They are portable systems. you hold them in your hands and play them on the go. This is not only ugly but actually hinders your ability to use a Game Boy. A swing and a miss all around.

You have to focus to turn on a light.

Using a hot glue gun to adhere seashells to everyday things is a pretty common occurrence among DIWhy posts, but these shells are particularly egregious — you literally can not turn on this light without intentionally digging your fingers in between shells.

For comfort... at the construction site?

And this one's my favorite, because this image is from a Craigslist ad. It read: Nice, Rugged Pair of Steel-Toed Crocs New, only wore to work one day, got fired. - jzrobot