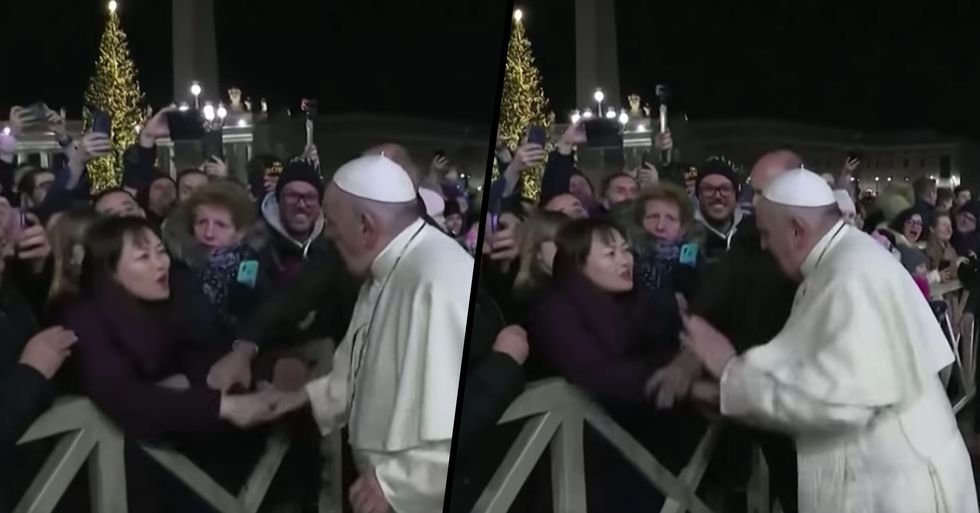 Meeting the Pope face-to-face would be, of course, life-changing.

Some lucky tourists were able to experience this on Tuesday, when Pope Francis was passing through St. Peter's Square in Vatican City, but things didn't stay so peaceful when an excited onlooker grabbed his arm and refused to let go.

It is estimated that around 1.2 billion people follow the religion all around the world.

And who is in charge of the Catholic Church?

The Pope, of course!

He is the worldwide leader of the religion...

The Pope is also known as the supreme pontiff, and he is the official Bishop of Rome.

The Pope is a very important figure.

The earliest record of a Pope figure dates back to the 11th Century.

So being elected as the Pope is a pretty big deal.

And he is the first-ever Jesuit Pope - a member of the Society of Jesus.

Francis has been in power for many years now...

He began working as a Catholic Priest in 1969, when he became the archbishop of Buenos Aires in 1998 and was made a cardinal in 2001 by Pope John Paul II, but it wasn't until 2013 that he was elected as the Pope.

He is also a very well respected man...

Throughout his public life, Pope Francis has been celebrated for his humility, emphasis on God's mercy, international visibility as pope, concern for the poor, and commitment to interfaith dialogue.

This means that members of the Catholic Church are often left starstruck when they meet Pope Francis.

He regularly interacts with the public and members of the church and many of his followers are able to talk to him and receive words of wisdom and advice.

The holiday season has just been and gone...

And it is no secret that Christmas is a very important holiday for the Catholic Church.

The eighty-three-year-old Pope was passing through St. Peter's Square in Vatican City, Rome, which caused flocks of tourists to rush to the Pope's side to wish him a Merry Christmas.

He walks past the crowd, shaking hands with some of the eager on-lookers...

And, in a recorded clip, tourists can be heard shouting, "Happy New Year" and "Pope!"

But one tourist was a little bit too eager...

The clip shows Pope Francis making his way down the line of excited tourists when one woman suddenly reaches out and grabs his arm.

She pulls him back towards her...

She continuously holds onto him and tugs his arm...

And, although his security is just stood behind, Pope Francis takes things into his own hands by slapping the woman's hand to loosen her grip.

And he walked away from the woman, who was being held back by security.

Pope Francis has now spoken out about the incident...

On Wednesday (New Year's Day), he apologized for losing his cool and he said: "So many times, we lose patience... me too."

He feels he set a bad example...

He then added, "I say 'excuse me' for the bad example."

This isn't the first time that the Pope has had an issue with personal space...

A video from earlier this year went viral after the Pope pulled his hand away from an admirer after they tried to kiss him on his hand, but he claimed that he did this purely for hygiene purposes.

To keep reading about Pope Francis, keep scrolling to hear about the time he married 2 flight attendants during a flight...