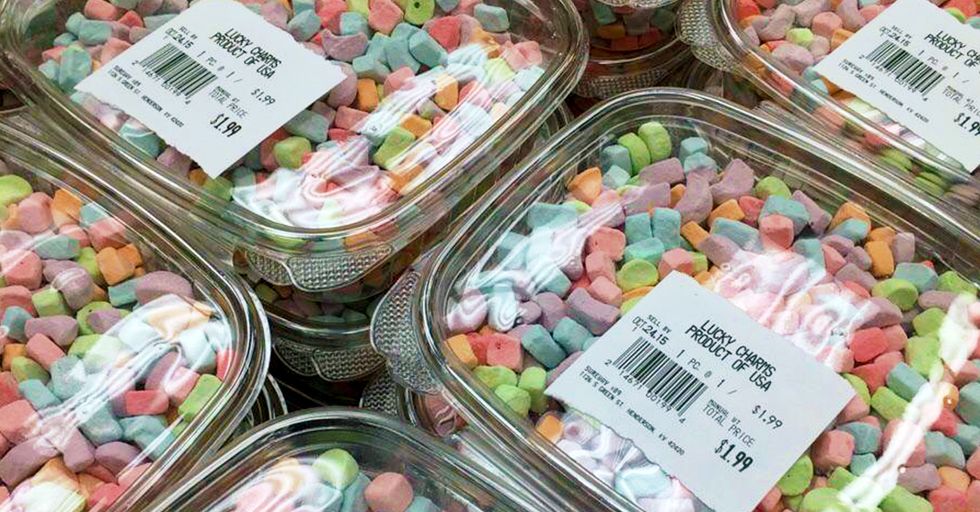 Futuristic AF Grocery Stores You Need to See to Believe

When you think of the future, you might be thinking of jetpacks, hover crafts or cloning machines.

But that's not exactly thinking out of the box.

These grocery stores are living in 3018 with their efficiency, clever thinking and straight up futuristic ideas.

Get ready to be weirdly fascinated by some local supermarkets.

Bags That Are Smarter Than You.

This grocery store puts your frozen and cold items in blue bags so when you get home, you know which ones to put away first. It's the little things that matter in life.

Protection For Your Pup.

When your pet is your best friend and you take them everywhere, sometimes grocery shopping can mean leaving your BFF at home. But this thoughtful grocery store has little pup shelters that are ventilated and well lit for your furry friend to hang out in while you get them their favorite treats. This is the kind of future I want to live in.

This makes way too much sense. An aisle directory, organized alphabetically, displayed on every single shopping cart? What a dream. All you Type A personalities out there might be squealing over this.

This one-ups those directories for sure. These "smart carts" have tablets on them and allow you to search for whatever item you need and it will tell you exactly where it is, right down to the shelf it's on. Whatever grocery store is raking in enough cash to put a tablet on every grocery cart is defining "futurist grocery stores."

Props to your marketing team because this is genius. This grocery store has different brands of toilet paper in their bathroom so you can test them out before you make your purchase. The next grocery store has future written all over it.

Meat Around The Clock.

Drink While You Wait.

This grocery store is for those people who always feel like they are getting dragged along with their friend who spends half an hour in each aisle. Don't get carried away in there. Nothing worse than being day drunk in a grocery store.

This is for me, I'm positive. This grocery store has carts in the middle of the store for those people who end up buying more than expected. I always go in thinking, "well I only need two things," then I end up walking around with fifty things, half of them being Ben & Jerry's cartons.

This grocery store attaches magnifying glasses so you can read those tiny nutritional value numbers on labels. No more squinty eyes or grumbling grandparents in the grocery stores.

"Cocktails To-Go" might be the best purchase you make, ever. This grocery store offers bundled drinks to make your cocktail at the pre-game party or your best friends BBQ when you forgot to BYOB. Up next, one of the coolest grocery stores to exist. Literally.

If you are desperate to chill that bottle of white wine ASAP before you go to your next dinner party, this grocery store offers free chilling services. This futuristic freezing chamber looks like something from your favorite sci-fi movie.

The Luckiest Treat Ever.

It's about time someone did this. There's a grocery store that sells just the marshmallows from the Lucky Charms cereal which is my dream. I don't know if someone has to go through boxes of cereal and pick them out because that sounds like a weird job, but I am so thankful that this exists.

Pick Your Own Veggies.

This redefines fresh grown veggies. At this grocery store, you can pick your own mushrooms from the soil and take them home with you. This makes going to the grocery store an adventure if you're not afraid of getting your hands a little dirty.

All my self-control is going out the window. This grocery store offers FREE BACON to snack on while you roam around the store. This could be quite dangerous for me considering bacon is one of my main food groups.

Phone Fixed While You Shop.

Well if this isn't the thing I've been waiting for my whole life. Now, instead of running to the store to buy a big bag of rice or searching yelp for a phone fix-it store because you dropped your phone in the toilet, you can run to the store and leave your phone in this magical, futuristic box. Our next futuristic grocery store has a little kick in its step. You're going to love this one.

I love whoever created this. There's a grocery store that not only prioritizes your privacy while you wait to pick up your prescription, it also encourages others to have a little fun while they wait by learning how to dance, the Waltz specifically. You become a patient and respectful person, and you leave the store a better dancer. It's truly a win-win for everyone.

Simple and environmentally friendly; this is the future. Digital price tags should be a common thing, honestly. Maybe the future is not as complicated as we think.

Free Fruit For The Kids.

Kids always love snacks to munch on. This grocery store has a little basket with fruit that's free for the kids. It'll keep them healthy and a little distracted while mom and dad cross off their shopping lists. Happy kids are the future.

There is nothing worse than getting a cart that has a wonky wheel and there's no way to figure out how to fix it. This grocery store is living in the future because if something is broken, it will get fixed.

This is absolutely bananas. This grocery store has a simple banana guide to tell you when is the perfect time to get your daily dose of potassium.

You've made it through the entire supermarket without giving in and buying any junk food. You're proud of yourself. You walk triumphantly to the checkout line and then you are faced with the real test. Stacks of chocolate bars there to tempt you and stare you down while you wait in line. This grocery store has candy free lines to help maintain your self-control or keep your kid's' sticky hands from grabbing the last minute candy bar.

Do you really need that extra bag of chips? It's okay to second guess that purchase, and instead of trying to be sneaky and toss it wherever you want, you can respectfully place your regrets in this basket. I'm positive that the employees love this idea too.

Land Of The Misfit Fruits.

Did I read that right? 6 billion pounds of fresh produce goes unused each year? Wow, poor fruit. Ugly fruit deserves love too! It's what's on the inside that truly counts. Wasting food is so a thing of the past and this grocery store is five steps ahead of the rest of us.

This grocery store is making a bold statement. If you are fourth in line, your groceries are free. And there's a guaranteed smile. The future is risky and exciting.

Banana Bread for All!

Rather than simply dumping slightly overripe bananas, this store has started selling them in bags with a recipe for banana bread printed on them. Everybody wins — including the bananas!

Sandwiches of the Future.

For whatever reason, this grocery store sells packages of exactly three slices of bread. I have to assume it's because when we're in the future, all of our sandwiches will be made with three bread slices.

This grocery store sells pumpkins that have been grown in molds so that they have a face. You know what's futuristic? Using clever tricks to save time. With this method, you don't have to take the time to carve your pumpkin. Just leave it on your porch as-is.

I Come in Peace.

If you're shopping at this grocery store, you may come across Marty the robot. It goes up and down the aisles in search of spills and trash, as well as taking inventory and alerting staff as to what needs to be restocked.

This one may seem simple, but it makes so much sense. This grocery store repackages the unbroken eggs from cartons that have some cracked eggs in them. It's the most efficient way of making sure all the eggs are sold and everyone's happy.

Rather than selling a roll of toilet paper with empty space inside, this grocery store carries a brand with a miniature roll inside the big roll. And to think — you've been paying (partially) for empty space this whole time!

It's the Most Important Meal of the Day.

Why waste time going to several different aisles for your breakfast ingredients? This store sells a kit that includes everything you need (except for the pans).

Everyone knows how important the bees are to the rest of the ecosystem, right? They're super important. What better way to raise awareness about our most important pollinators than by bringing them into the store where people will see them? (Don't worry; they have access to the outside through a tube in the wall.)

Maybe in the future, trash will be a thing of the past and people will need these artistic displays to remember what it looked like. In the meantime, I like this grocery store's style!

A Gude to Apples.

This store has a display in the produce section showing the sweetness levels of different apple varieties. There's nothing worse than wanging the sweetness of a Fuji and ending up with a Braeburn.

Fresh from the Bog.

Haven't you always wants to scoop your own cranberries from a bog? At this grocery store, you can! Pretty sure you can't put on waders and stand in there, though.

In the future, everyone buys sunglasses with their cheese. It's just how it works. At this grocery store, you can be part of the future.

This grocery store is futuristic for two reasons. First, it grows vegetables on the roof! Secondly, it live streams those veggies inside the store itself!

At this store, you can grind your own nut butter. It's fresh, it's convenient, and most of all, it's fun!

This store has escalators especially for your grocery cart (can you imagine trying to wrangle a cart up a standard escalator?). They've really thought of everything.