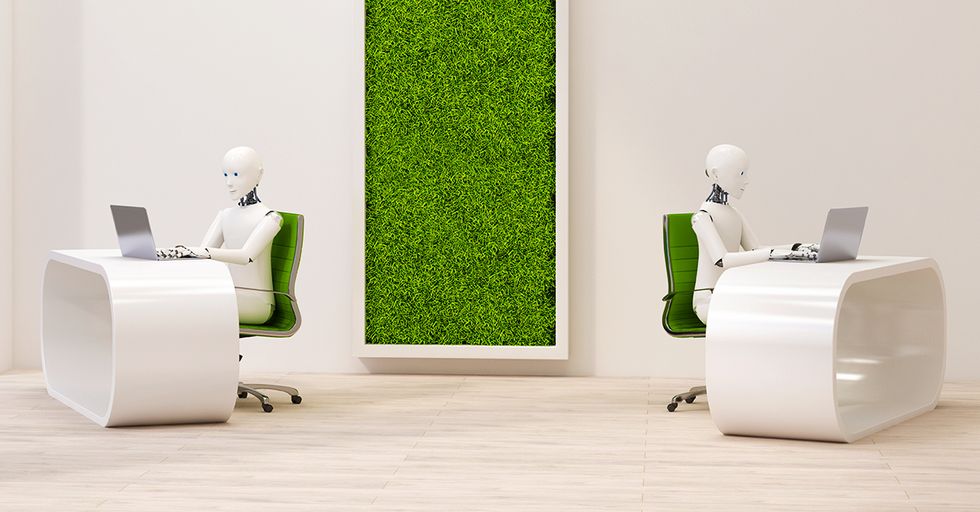 Having a job is one of those things that can be simultaneously wonderful and totally frustrating. Wonderful because, you know, money. But frustrating because you have to deal with annoying coworkers, aggravating bosses, or a lack of good snacks in the break room.

But not all workspaces are filled with reasons to make you regret accepting a job offer.

Today, we're gonna look at a few offices that are straight-up from the future.

If you're in the market for a new job, I recommend looking up these offices so you, too can continue living in the future. Someday, maybe all offices will have these kinds of perks.

Like this elevator that lets you know whether it's raining outside.

It gives you plenty of time to ready your umbrella — or make a trip back upstairs if you left yours behind. Is that not the most considerate elevator you've ever heard of?

In this office, you can drink the air.

Yes, you read that right. It collects moisture from the air and then lets you drink it. How? I'm honestly not totally sure, but something tells me "drinkable air" tastes better than plain ol' tap water.

This office has a slide.

I mean, enough said. If you ever have an interview at a place that has a slide, take the job immediately. It doesn't even matter what the job is, really.

This one dispenses orange juice!

And not just any orange juice. Fresh-squeezed orange juice that it makes right before your very eyes. Quick! Pass me a W-4!

This office rug is hiding something.

The rug shows a map of the city where the business is located (Dallas). Not only that, but that red dot shows exactly where the office building is located. Most office buildings I've worked in have been decorated exclusively with taupe paint and gray carpet, so this would be quite a step up.

Check out these TVs from the future.

You can only hear them if you're standing directly below the domes you see at the top of the picture (which explains the footprints). Why? I don't really know, but it's futuristic and I love it.

What a great way to get some exercise while also getting your work done! I'm guessing that doing some pedaling also gets some mental gears turning.

Your office may have a coffee machine...

But does it have two different tea brewers that brew tea at the exactly right temperature depending on what type of tea it is? Yeah. Didn't think so. If you're looking for a way to bring your own office coffee brewer into the future, try this next idea...

Living (and working!) in the future doesn't always mean things are sparkly and high-tech. Here's a simple solution to an age-old problem thought up by someone who is obviously living in the future mentally.

Remember the snacks I mentioned earlier?

This office has a stockpile of cheese puffs. Morale is at an all-time high.

This office has a very unique map:

Each of those little screens displays the time for the country it's located by. In the future, all workspaces will have amazing gadgets like this one.

This office does carpets right:

It's a runway, complete with cool lights and everything! This is quite a few steps above that ubiquitous gray office carpet I mentioned earlier.

This is part of an office located in Portland, Oregon. (And of course it is. Just look at it.) This next conference room was totally repurposed. See if you can guess what it was originally...

It was a bank vault!

You could have the most boring, mundane job in the world, and it would still be one of the top five coolest jobs ever if you took meetings in a bank vault. (Keep that in mind next time you're looking for a job. Always check for bank vaults. And slides! Don't forget slides.)

This office brings the outdoors in:

Sometimes you can't get away from the office, but that's no reason why you shouldn't be able to enjoy the sight of nature. If I worked here, I would absolutely bring a blanket and have a picnic lunch in this room on a rainy day.

No, this isn't footage of meetings for ghosts. Those chairs push themselves in after a meeting! Think of all the time you could save!

Here's another simple one, but *kisses fingertips*!

I don't know exactly what it is about a drawer microwave that makes me feel like this place is living in the future, but it really, really does. Think they're hiring?

And finally, the roof of one of Google's offices: