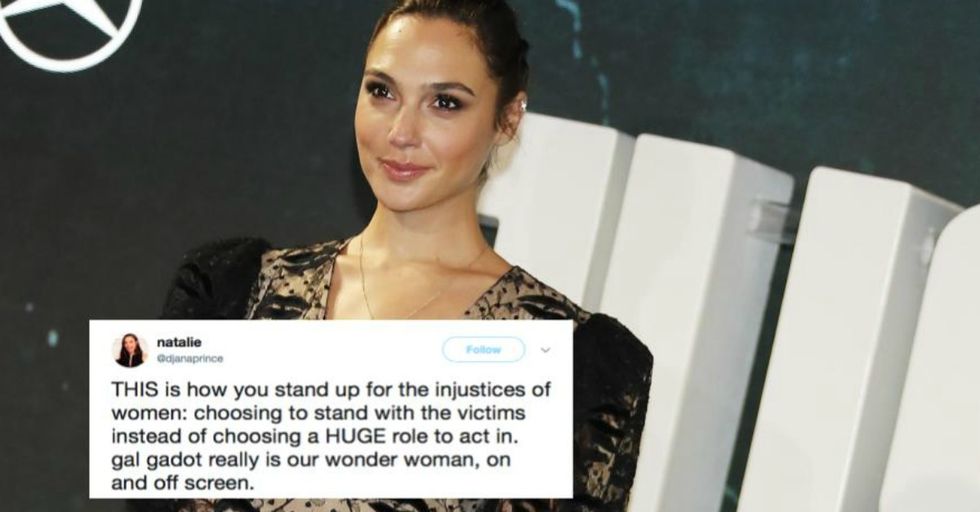 Turns out Gal Gadot is as principled in real life as she is in her DC Comics vehicle Wonder Woman. According to Page Six, the actress who plays Amazonian superhero Diana Prince is refusing to sign on to the sequel of the movie that propelled her to world-wide fame if producer, and known perpetrator of sexual assault, Brett Ratner is involved.

Ratner, the Hollywood power player behind the Rush Hour series and X-Men: The Last Stand has been accused of sexually assaulting multiple women including actress Olivia Munn.

His production company Ratpac-Dune Entertainment had a co-financing deal with Warner Brothers for Wonder Woman, which grossed over $800 million worldwide.

According to a Hollywood source, Gal Gadot doesn't want her films to continue benefitting a man accused by multiple women of sexual assault.

“She’s tough and stands by her principles," the source stated. “She also knows the best way to hit people like Brett Ratner is in the wallet. She also knows that Warner Bros. has to side with her on this issue as it develops. They can’t have a movie rooted in women’s empowerment being part-financed by a man ­accused of sexual misconduct against women."

This is not the first time the actress has spoken out against sexual assault.

In October, Gadot posted a message of support to the survivors of sexual assault. "Bullying and sexual harassment is unacceptable," the actress wrote. "I stand by all the courageous women confronting their fears and speaking out. Together we stand. We are all united in this time of change."

Warner Brothers has already responded to the allegations against Ratner.

Last week, the studio announced that it was parting ways with the director. It will not be renewing its $450 million co-financing deal with his company.

Ratner made a statement to the press on the matter.

"In light of the allegations being made, I am choosing to personally step away from all Warner Bros.-related activities," Ratner said. “I don’t want to have any possible negative impact to the studio until these personal issues are resolved." He has yet to comment on Gadot's demands.