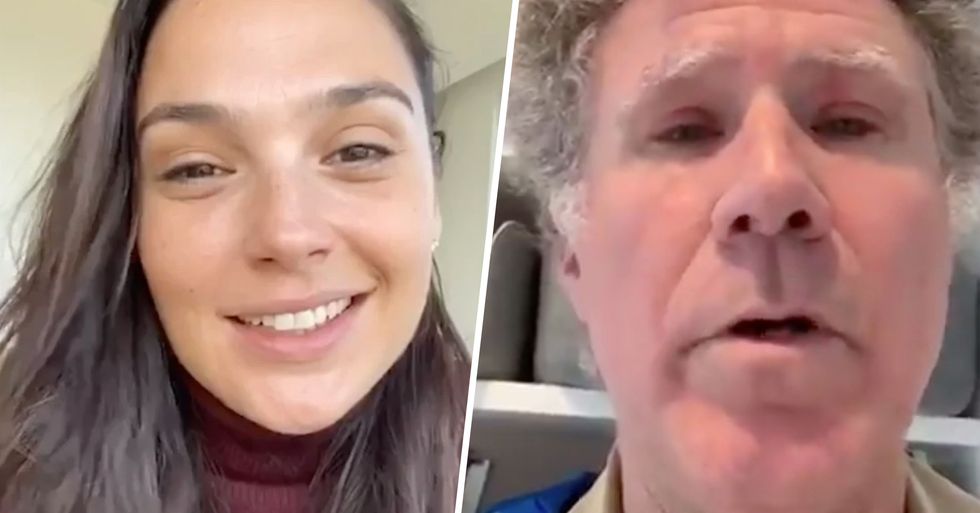 Amidst the coronavirus outbreak, many famous faces are doing their bit to help and using their platform for good.

Many have been performing shows on Instagram stories or sharing positive posts.

And in the latest attempt to boost morale, Gal Gadot has called on all of her A-lister friends to sing "Imagine" while self-isolating. But this time, it hasn't gone down as well as she was probably hoping...

Keep scrolling to watch the clip and to see why people aren't impressed.

COVID-19 is at the forefront of pretty much everyone's mind right now.

And the boundaries of self-isolation and social distancing has become hugely important for citizens to follow, including celebs.

In order to help the calm of the spread of Coronavirus, people are advised to self-isolate if they have any symptoms or have serious health conditions already. Self-isolating includes staying indoors and leaving only for exercise.

And we can already see the impact that isolation is having on the boredom of many people, including celebrities, with that they are posting online.

Chris Martin has been posting a mini-concert on his Instagram Live.

Ashley Tisdale has been posting videos of her dancing to High School Musical.

Serena Williams said that she will be "Spending the next 6 weeks in solitude. Being a wife. Being a mom. Cooking. Cleaning. Spring cleaning. Face mask. Makeup tutorials. I’ll let you know how it goes.... stay safe everyone. This is serious."

And John Legend and wife Chrissy Teigen also got involved with the online singing.

But these celebrities aren't the only ones using their voices to help during the period of self-isolation.

As Gal Gadot took to Instagram on her sixth day in self-isolation with a sing-along full of celebs.

In a creative way to boost morale online.

The actress has called on an impressive slate of celebrities friends to get involved.

She called on her A-lister pals to sing a rendition of John Lennon's "Imagine."

Why? To show people that we are "all in this together." Keep scrolling to watch the full clip.

The 3-minute video was shared on Gal's Instagram page.

And features a ton of famous faces including the likes of Natalie Portman, Mark Ruffalo, Sia, Cara Delevingne, and Will Ferrell, who all take turns in singing the song.

Gal starts the video off by saying this:

"Hey guys! Day 6 in self-quarantine and I've got to say these past few days have got me feeling a bit philosophical. "You know this virus... it has affected the entire world. Everyone. It doesn't matter who you are, or where you're from, we're all in this together."

"I saw a video of an Italian guy playing the trumpet on his balcony, for all the people locked in their homes, and he was playing 'Imagine' and there was something so powerful and pure about this video."

Gal then proceeds to sing the first line of the tune.

Before the video quickly switches to cuts of various celebs singing.

Actress, Kirsten Wigg follows singing "It's easy if you try".

Followed by heartthrob, Jamie Dornan with the line "no hell below us".

Labrinth and James Marsden go after each other.

And Sia, Amy Adams, Ashley Benson, and Will Ferrell follow after.

Singing "I hope some day you'll join us"

Before Gal sings the final lines.

"And the world will be as one".

A way to pass time.

And a nice idea, yeah?

But, although a nice thought.

It seems the gesture didn't go down as well as Gal would have hoped...

In fact, after it surfaced, Twitter was flooded with furious viewers.

And many were raising the same point.

"this is so weird this quarantine is hell."

Viewers were all raising the same questions.

What is singing a song actually going to do?

Many were saying celebrities should be donating money instead of singing an "awkward" acappella.

not rich ppl doing this instead of opening their purse like what are we gonna do with this awkward acapella 😭 https://t.co/mICxLbOWrR
— electra (@electra)1584584061.0

The move seems to have really backfired.

In light of celebrities speaking out, many people have been quick to point out the contrast between celebs and "normal" people during the COVID-19 outbreak. Keep scrolling to see the pictures that sum up the stark difference.