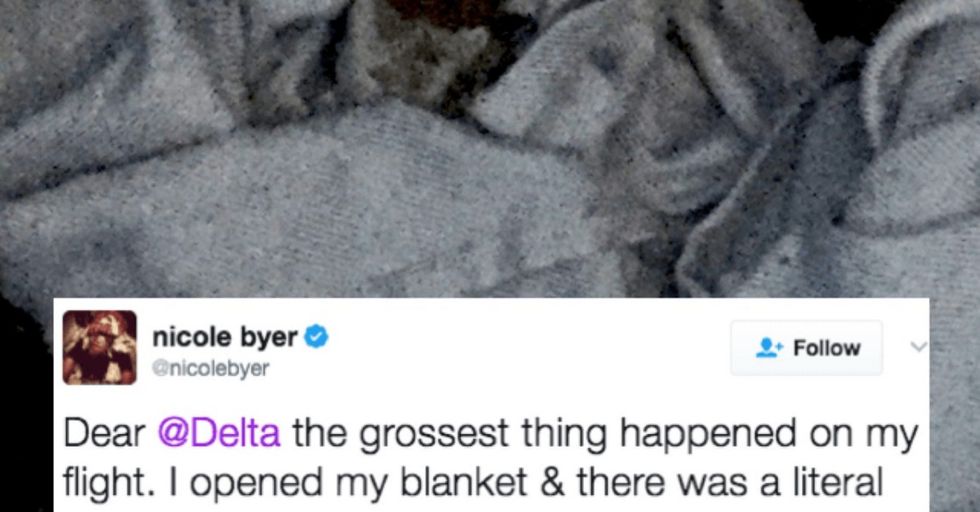 Unless you're loaded with cash, flying just isn't fun.

But thank your lucky stars it's never been THIS bad for you.

Comedian Nicole Byer wasn't laughing when on a recent Delta flight, she opened up the airline-provided blanket and found, well, this:

You probably can't make out the pic, but Nicole does a great job of filling in the blanks.

If you're gagging after the fact, imagine how she felt at the BEGINNING of her flight.

How could she be sure it was feces?

Well, uh... if you had a giant pile of feces in front of you, you'd probably be able to tell.

So. Many. Questions. (None of which we really want the answers to.)

Especially because it was one of the blankets that comes pre-wrapped in a bag that is supposed to signify that the linens inside have been properly cleaned and folded.

We're not surprised that this sort of thing is a lie by the airlines, but we're still disappointed and grossed out.

But... how did the feces sneak through?

The world may never know, but that didn't stop people from wondering. So. Many. Questions.

But seriously though, WTF? I bathe in sanitizer after a flight anyway, but this is just next level.

It would make me switch airlines at best, and never fly again at worst.

Her "crappy" situation had yet to be resolved.

And she was stuck on the plane, waiting with her turd blanket. Eww.

Delta did eventually respond, but they somehow made it even worse.

That is not a proper response to someone finding ACTUAL POOP in their blanket. What a terrible, inhuman response to a real issue.

They might've just delievered the single worst customer service response ever, and people were not very pleased.

Byer wasn't too thrilled with that response either.

And understandably so. I would expect to own part of the airline by the time this was over.

Plus, the PR damage has been done.

Let's hope these people keep their word. Delta has to pay for this kind of negligence.

The poop jokes were too irresistible though.

Even if you feel bad for her, it's hard to resist an easy joke. We're glad SOMEONE'S enjoying this.

People were even making poop jokes on accident.

Part of me hopes this is a hoax, just because it's so horrible to actually think about that happening to someone.

That makes two of us. Well, probably a whole lot more, honestly.