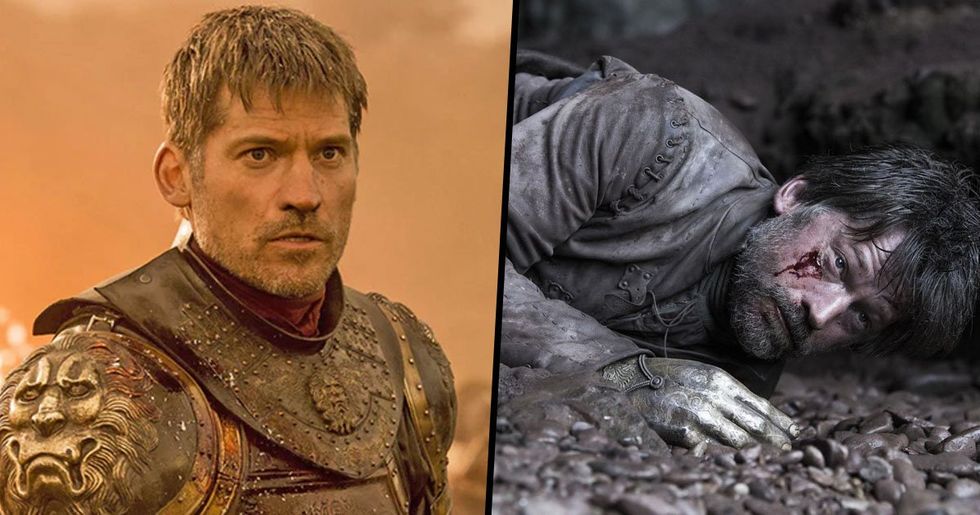 If there's one word to sum up the final season of Game of Thrones, it would have to be "controversial". From scene-stealing coffee cups, to accusations of "plot armour," and character arcs that can only be described as disappointing, there's no denying that some fans have been distinctly underwhelmed by the final episode in this epic story.

One area wherein viewers have been left particularly disappointed is in the final moves of Jaime Lannister. The character has been one of the most complex and morally ambiguous in Game of Thrones history, but by episode three it seemed his redemption arc was complete. Then, writers took a strange turn, undoing all of the seasons of characters development, sending him back to King's Landing to die with his evil twin, Cersei.

But some believe this cannot be the end for one of the show's most interesting characters. Fans are looking everywhere for proof that Jaime may be coming back - though not everyone is convinced that would be a good thing.

The ultimate conclusion of Game of Thrones is fast approaching.

There's just one episode left in the entire epic story in order to tie up any loose ends and ultimately decide the future of the seven kingdoms.

We're still not sure of the fate of Westeros.

And after the massive amounts of destruction we saw in episode five, it seems likely that there won't be a satisfying answer.

We also don't know the answer to one important question.

We're not sure who's going to end up sitting on the Iron Throne. With Daenerys winning the Last War, it should probably be her - but she also appears to have lost the plot a little.

Overall, fans have not had the best reaction to the season so far.

There have been many aspects of the show called into issue, with people worrying that the series has lost its initial magic.

Many think the finale will be disappointing.

After what's happened in the last few episodes, many are preemptively concerned about how the whole thing is going to draw to a close.

There have been a few areas of particular disappointment.

Many thought the entirety of the Great War was massively underwhelming, with the Night King taken down by one quick move from Arya Stark.

For example, fan fave Brienne of Tarth, who was left looking somewhat foolish after sleeping with Jaime Lannister, then being unceremoniously dumped.

There have been more practical problems, too.

There was fan uproar over a rogue coffee cup found in episode four, which many thought was symptomatic of the laziness of the season overall.

And there have been other goofs.

WAITTTTT. ANOTHER SLIP UP??? A week after the #GameOfThrones coffee cup—allegations of a new goof have surfaced:… https://t.co/ysBYm7c0zU
— Complex (@Complex)1557760290.0

For example, Jaime Lannister, who famously has a false, golden right hand, appeared to grow it back to hug his sister in episode five.

There's also been a problem with the fate of certain characters.

Many fans have been disappointed by what they've seen as the throwing away of seasons of development in this final series.

One of the show's most beloved characters has suffered a very disappointing turn into total chaos and cruelty, which many claim was totally out of character.

But there's one character who's arc has been even more troubling.

Jaime Lannister has been one of the most complicated figures in the show's history. In one of his very first scenes he pushed a young boy out of a window to conceal his affair with his twin sister.

Fans initially thought of the knight as pompous, vain, and incredibly self-important. But over time, things have changed.

His relationship with his brother, Tyrion, has been deeply humanizing.

The fact he's consistently treated his outcast brother well suggested there was more to this character than met the eye.

At the start of the season, he seemed to be on the right side.

He even returned to Winterfell to fight alongside the northern armies and protect the realm from the Night King.

It seemed Jaime had changed.

But then he reverted back to the old character we hated. He left Brienne to go back to his hateful (and hugely villainous) sister Cersei.

The two were reunited at the end of episode five.

The estranged twins and lovers were trapped under the Red Keep as King's Landing burned to the ground.

The implication was, this was the end of both characters.

It seems pretty unlikely that either of these two could have survived being buried in rubble as the buildings around them crumbled.

But that hasn't stopped some fans from a burgeoning conspiracy theory.

A select group of internet users (who have named themselves the "clown club," because they've been treated like clown by the show's writers in relation to Jaime) have another idea.

They believe there's a chance one of the siblings survived.

And the person in question? Jaime Lannister - who is yet to have been given a proper farewell by actors and writers of the show alike.

The actor who plays Jaime wrote this on Instagram.

Nikolaj Coster-Waldau bade farewell to Lena Headey, who played Cersei - but didn't make mention of the end of Jaime.

People have also pointed this out.

It seems as though Nikolaj is set to be paid for appearing in the show's final episode - which seems unlikely, if his body remains crushed at King's Landing.

And there's yet more evidence.

James Hibberd, who records exit interviews with the Game of Thrones actors after their characters are killed off, has not yet released one with Coster-Waldau.

Many believe there's no way this is how Jaime Lannister should have met his end.

Of all the characters on the show, Jaime had been on one of the biggest emotional journeys. His ending just didn't seem quite in line with his character arc.

Although some have criticized the conspiracy theory.

Many think there's a reason for the theory.

The idea of Jaime being alive could be attributed simply to denial, rather than to any genuine basis in fact.

Although some have pointed out this amusing fact.

I obviously want Jaime Lannister to be alive for multiple reasons, but mostly because I want the clown club to be s… https://t.co/2efsaiWGsZ
— Kelly (@Kelly)1558087767.0

If Jaime Lannister is indeed alive, it could be the first time a genuine plot in television has been born entirely out of dedicating stanning.

A twist involving Jaime Lannister surviving would hardly be the most controversial aspect of this problematic season.

Though some have taken another view.

Yes, the way Jaime was killed was hugely disappointing - but it was kind of in line with the show's tendency towards disruption and ambiguity overall.

We're just not sure!

One the one hand, it would be great to see Jaime survive the biggest mistake of his life. But on another, there's still so much to be sorted out in the final episode. We're waiting with bated breath to see what happens! Need reminding of who we've lost so far in the series? Keep scrolling!