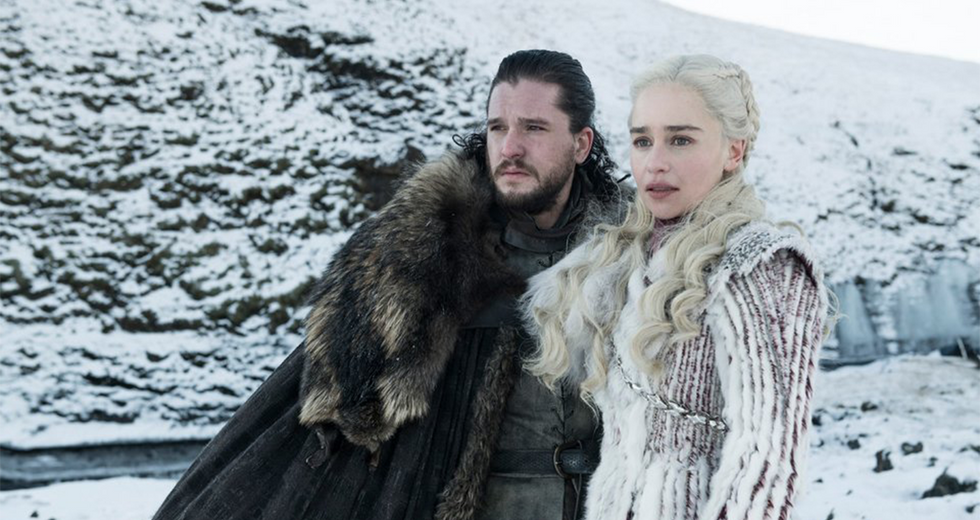 If you're anything like me, you've been salivating for any scrap of news about Game of Thrones' highly anticipated final season since well, the end of last season. For those who haven't been Googling "GoT release date" for months, that special day is April 14th. And now that it feels just within reach, HBO is rewarding fans with 14 gorgeous, surprising new images of our favorite characters ahead of the premiere date.

If you look closely, the images give away some small clues (check out Davos' wrinkled brow and the romantic shot of Jon and Daenarys!) that might give us some insight into the season's plot. But my biggest takeaway from these images is how far we have come with these characters and how much they have changed since we met them in April of 2011. Take a look at the shocking differences between Season 1 and the upcoming Season 8. And let us know in the comments if you think these images give away any spoilers!

First, he was friend and advisor to Stannis Baratheon, and now to Jon Snow, but through his entire journey, Davos has been lead by bravery and loyalty. We can't wait to see what happens along his journey in Season 8.

This image from the new season shows Ser Davos' age, wisdom, and cautious attitude towards people of great power.

He famously said, "If we don't put aside our enmities and band together, we will die. And then it doesn't matter whose skeleton sits on the Iron Throne."

Gwendoline Christie as Brienne of Tarth

Remember back in Season 1 when Brienne swore to protect Renly Baratheon, and then after his death, Lady Catelyn Stark? Well, things have certainly changed since then.

When we left Brienne at the end of Season 7, she had begged Jamie to convince Cersei to put aside their differences and fight on the same side against the wights. Finally, we see her with Jon's group, apparently showing that she has chosen to help the North in their quest.

"All my life men like you've sneered at me, and all my life I've been knocking men like you into the dust." ―Brienne to Jaime Lannister

Bran was the curious, bright-eyed, bushy-tailed kid of the Stark family until his tragic fall from a window (or, rather, push from a window...) in Season 1.

Now, Bran is a warg who has become the newest Three-Eyed Raven. This season, he will need to use his talents in the war against the Night King.

"I need to learn to see better. When the Long Night comes again...I need to be ready." ―Bran Stark

Lord Varys has always been a tricky fellow, driven more by his quest to be close to power than anything else. Varys, a eunich, was born a slave and has spent his life striving for a never-ending amount of freedom and access.

He's an avid gossip and a talented manipulator who trades on information. His network of "little birds" give him information from across two continents.

"Storms come and go, the big fish eat the little fish, and I keep on paddling." ―Varys

Ah, the jaunty, carefree, sister-loving Jaime of yesteryear. From his tousled, lacrosse-player hair to his shiny, brand new suit of armor, Jaime was the picture of masculinity and strength.

And now? Well, Jaime still has his wry, handsome smile... even if he is missing a hand and some of his pride at this point.

"There are no men like me. Only me." ―Jaime Lannister to Catelyn Stark

All the way back in Season 1, Daenerys, only daughter of King Aerys II Targaryen and Queen Rhaella Targaryen, was set to be married off to Khal Drogo, Dothraki king. Her brother, Viserys abuses and disrespects the Khaleesi until Khal Drogo murders him by pouring molten gold over his head. Soon after, Daenerys loses both her partner and unborn child at the hands of a witch, starting her on the long and twisted path to becoming The Mother of Dragons we now know.

When we left Daenerys at the end of Season 7, she was... ahem, getting it on with Jon Snow, who, unbeknownst to her, is actually her nephew. This show has no problem with incestuous love affairs, but this one made me pull at my collar a little bit like "yikes."

"I spent my life in foreign lands. So many men have tried to kill me, I don't remember all their names. I have been sold like a broodmare. I've been chained and betrayed, raped and defiled. Do you know what kept me standing through all those years in exile? Faith. Not in any gods. Not in myths and legends. In myself. In Daenerys Targaryen. The world hadn't seen a dragon in centuries until my children were born. The Dothraki hadn't crossed the sea. Any sea. They did for me. I was born to rule the Seven Kingdoms, and I will." ―Daenerys Targaryen to Jon Snow

Aww. Back when these two were best buds and everything was fine.

Sam has been through a lot since Season 1, but on the upside, he now has Gilly and baby Sam. When we left him at the end of Season 7, he made the shocking discovery of Jon Snow's true parentage.

"I saw it with my own eyes on our way down to Castle Black. He drove a dagger into the walker’s heart. He risked his own life to save mine more than once. He’s a greater warrior than either of you will ever be." ―Gilly to Randyll Tarly and Dickon Tarly

It almost makes me nostalgic to see Cersei with her long hair, before she was a widow, when all her children were living. Even though she is arguably one of the darkest characters in the Game of Thrones universe, she is driven by the pure love of a mother for her children. And now that her children are dead, Cersei has nothing left to live for... a fact that makes her an incredibly dangerous, unpredictable loose canon.

You can see in her eyes that immense tragedy has taken the wind out of her sails. Will Cersei join Jon and his crew to fight the Night King? Or turn her back on them entirely?

"When you play the game of thrones, you win or you die. There is no middle ground." ―Cersei Lannister

Cersei Lannister in the Red Keep

You may remember that at the end of Season 7, Jaime visited Cersei at the Red Keep. While there, Cersei asks Jaime if Daenerys will negotiate a surrender, but after discovering she seeks an armistice because of the larger threat at play from the Night King and his army, she begins to consider an alliance.

Kit Harington as Jon Snow (or should we start calling him Aegon Targaryen now?)

I can't get enough of this young, fresh-faced little pup. Oh, and the dog is OK too. But seriously, look at those curls! That face!

Now, Jon has weathered untold storms, risen from the dead (no biggie), and his true royal parentage has been uncovered.

Bran Stark: "And Jon's real name..." Lyanna Stark: "His name is Aegon Targaryen. You have to protect him. Promise me, Ned." Bran Stark: "He's never been a bastard. He's the heir to the Iron Throne." — Bran and Lyanna Stark

Back in the day, this youngin' didn't have a hit list as long as her arm, a handful of enemies sprinkled across the continents, or the ability to become faceless. She was just the youngest daughter of House Stark, obsessed with her sword, Needle, her direwolf, Nymeria, and getting the fleeting attention of her big brother, Jon.

In the years that passed, Arya has become a hardened, seasoned, stealthy warrior. She's checking names off her list, and her enemies never see her coming.

"A girl is Arya Stark of Winterfell, and I'm going home." ―Arya Stark

Tyrion used to be the drunkard son of House Lannister. He was treated as the family shame, especially by his father, Tywin, for both literally and figuratively not measuring up to the family name. With no expectations put on him, Tyrion drank, slept with whomever he pleased and generally rabble-roused, that is, until he was kidnapped by Catelyn Stark as collateral, for a crime he did not commit.

Now, Tyrion is the trusted advisor to Daenerys. He must unite the Lannister family with Jon and Daenerys if they want any hope of surviving The Night King's army. But can he pull it off? Only time will tell.

Sansa began her journey as the spoiled, bratty daughter of Ned and Catelyn Stark, but life was not kind to her. It quickly stripped her of her illusions and forced her to grow up fast.

This portrait of Sansa really highlights her hardened, disillusioned outlook on life. The look in her eyes seems to say, "I've seen it all, and I won't back down now."

"I did what I had to do to survive, my lady. But I am a Stark, I will always be a Stark." ―Sansa to Lyanna Mormont

They might be related but dang, they do look good together. What are you most excited to see in Season 8? Let us know in the comments!