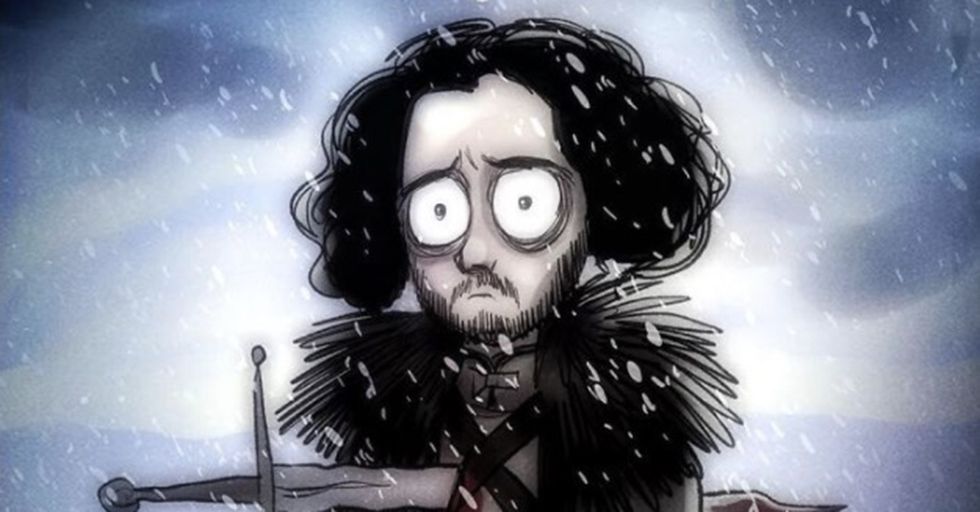 The ultimate fandom crossover has finally happened and we can't contain our unbridled excitement.

Thanks to an incredible artist named Andrew Tarusov, everyone's favorite Game of Thrones characters have been brought to life in the style of world-renowned director and artist, Tim Burton.

If you're a fan, you have to see these incredible pieces of art.

Aside from his directing, Tim Burton is known for his particular art style.

His art style is cartoonish, but also a little bit twisted and creepy (which is why it's so adored).

He even drew other characters in the Burton-style previously, like Snow White.

Game of Thrones, on the other hand, is much more realistic and gritty.

Which is why people were so excited when this crossover appeared. Creepy AND gritty? That's going to get some people's attention!

Daenerys appears here with the signature large Tim Burton eyes, and also with one of her dragons in the background as a nice touch.

Which is true to Jon Snow form. He's always looking like he's troubled, and those eyes don't help. Tarusov asked his followers if they'd like to see more GoT + Burton crossovers, and it's pretty obvious what the answer was. You'll definitely want to see how he drew The Night King...

Of course we do!

Tyrion is one of the best in this style.

His stature lends itself well to the Burton-style drawing, and the wine chalice is perfect.

Tarusov's art is so detailed that he captures even small details about the characters.

Like Melisandre's crazy eyes, for example. If you're gonna accentuate eyes, the Tim Burton route is a good one to take.

Another character that lends herself well to the Burton-style is Arya Stark.

The enormous eyes suit the youngest Stark very well. And speaking of the Starks...

Which is kind of weird, considering the creepy art style.

You know who is absolutely not adorable? Joffrey.

Sorry buddy, no art style can save you.

Tarusov drew Sansa and Littlefinger together as well.

But Littlefinger is maintaining the perfect level of creepy in the back.

Missandei and Grey Worm look incredibly cute together though.

Especially with those nightmare-inducing eyes.

Tarusov must've decided to save the couples for last.

One of the final GoT + Burton pieces he did was this awesome Brienne and Tormund one. We're loving this almost-love story! Did you love these as much as we did? Let us know on Facebook!