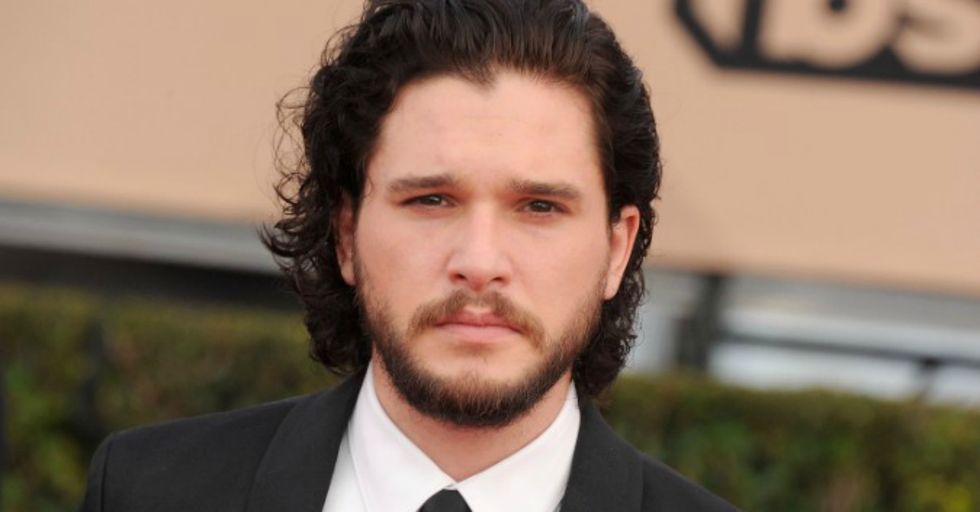 No one says the right thing 100 percent of the time. We've all experienced that awful moment of, "oh my gosh, did I seriously just say that?" Making mistakes and saying something insensitive or inaccurate is a common occurrence for all people, but what sets some of us apart is having the humility and presence of mind to admit when we messed up. That's exactly what Game of Thrones star Kit Harington displayed earlier last week when he apologized for a comment he made about sexism in Hollywood.

Last year, Harington participated in an interview with the Sunday Times.

In the interview, Harington talked about sometimes feeling objectified. "I like to think of myself as more than a head of hair or a set of looks," he said. "It's demeaning. Yes, in some ways you could argue I've been employed for a look I have. But there's a sexism that happens towards men. There's definitely a sexism in our industry that happens towards women, and there is towards men as well. At some points during photoshoots when I'm asked to strip down, I felt that. If I felt I was being employed just for my looks, I'd stop acting."

Upon hearing that Harington thought there was sexism toward men, a bunch of people were like:

Sexism against men isn't a thing. To be clear: There are absolutely instances of prejudice against men by women (and/or by other men). But that's not sexism. Women lack the institutional power that men have, and therefore cannot be sexist toward men.

Many people called Harington out for his problematic remarks.

People were disappointed in the actor for seeming to equate his own experiences of being objectified with those of women in the industry, who are demonstrably underpaid, under hired, and, in many cases, sexually harassed by men with all the power. Again, Harington's feelings of being objectified are totally valid — many people do only see him as a sex symbol, and that's not OK. But using the word "sexism" invalidates many women's actual experiences with actual sexism.

Now, though, Harington has apologized for his use of the word sexism and offered some clarity on his earlier remarks.

In a new interview with the Guardian, Harington walked back his use of the word "sexism." "Sexism against men is not something I should have really said," Harington admitted. "I think what I meant was, being objectified. At that time, I did feel objectified, and now I’ve learned how to control that." He then continued: "Look, I do think men can get objectified. I do feel I have been objectified in the past, sexually as well, in pieces that have been written about me. Has that made me feel uncomfortable in the past? Yes. Do I think my position is the same as a woman’s in society? No. They’re very different things, and I should have separated them. I was wrong."

Kit Harington's apology is a great example of what to do next time you accidentally stick your foot in your mouth.