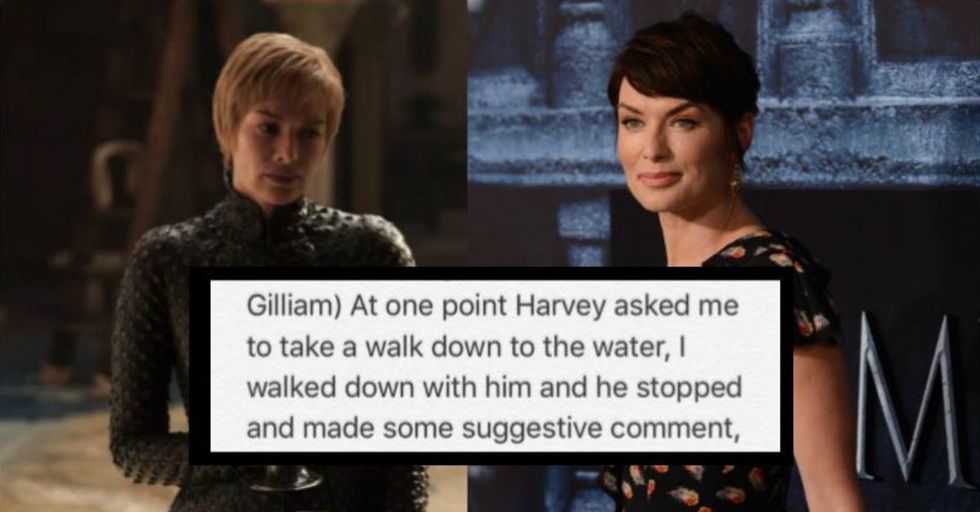 It seems as though nearly every day we're hearing about yet another woman who was sexually harassed or assaulted by Harvey Weinstein. There's a reason for that. It's because Harvey Weinstein assaulted many women over the course of several decades. These stories will probably continue to make headlines for a while, and we're going to keep covering them here at 22 Words. Because it's important for the women and men who have been forced to remain silent for years know that we hear them, and we believe them.

Today's story comes from Lena Headey, one of the stars of Game of Thrones.

Lena Headey, who plays ice queen Cersei on HBO's Game of Thrones, is now one of the biggest stars in Hollywood.

Unfortunately, like too many other women in the industry, Headey has been sexually harassed by Harvey Weinstein.

After it was revealed that Harvey Weinstein has been sexually harassing and abusing women for decades (and then paying them off to keep them quiet), Headey chose to speak out about her own experiences.

Headey took to Twitter to share about two separate instances with Weinstein, one of which resulted in her bursting into tears in her car.

Headey tweeted the following about the first time she met Weinstein back in 2005.

While at the Venice Film Festival, Weinstein invited Headey to take a walk by the water, where he then made a suggestive comment and lewd gesture. Headey laughed off his behavior.

Her next interaction with Weinstein happened years later in Los Angeles.

Weinstein invited Headey to breakfast. During the meal, he started asking Headey questions about her love life. He then invited her to his room where he said he had a script waiting for her. Headey wrote that as soon as she got in the elevator, her "whole body went into high alert." She told Weinstein that she wasn't interested in anything that wasn't work-related. "I had such a strong sense of don't come near me," she wrote.

The two of them arrived at the hotel room door, but Weinstein's key card wouldn't work. Headey says Weinstein then grabbed her arm and walked her out of the hotel but not before whispering in her ear: "Don't tell anyone about this. Not your manager. Not your agent." "I got into my car and I cried," Headey wrote. Weinstein is currently under investigation by the NYPD and London police. He continues to deny any allegations of nonconsensual sexual conduct.