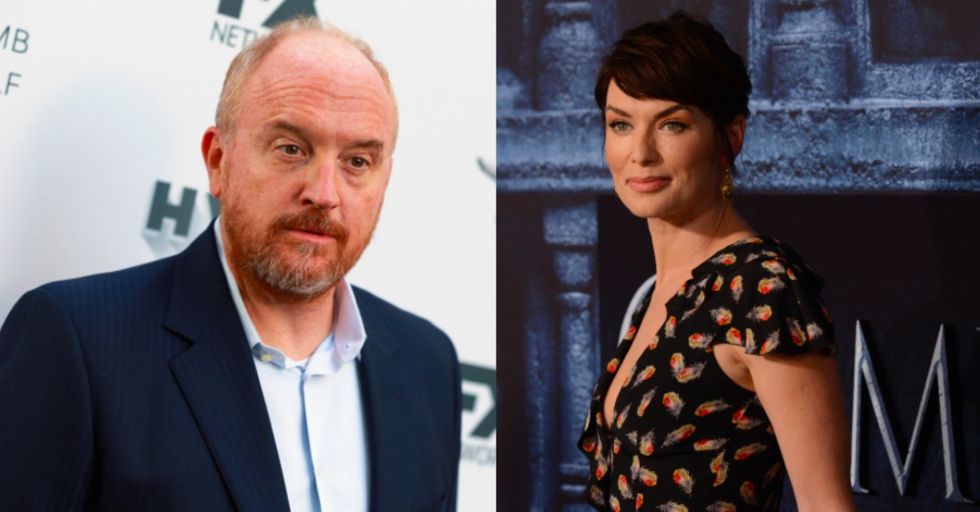 Cersei Lannister is on a warpath, and it's kind of amazing to watch.

Last week, The New York Times published a report in which five women accused Louis C.K. of sexual harassment. C.K. was only the latest in a string of sexual abusers in Hollywood to be outed. Ever since Harvey Weinstein was taken down by accusations from dozens of women — including Lena Headey (Game of Thrones) — women and men have felt more comfortable than ever coming forward with their experiences of sexual assault and harassment. There's a changing tide, and Headey is a strong voice in a sea of many.

Days after the allegations against C.K. became public, the comedian himself issued a statement in which he acknowledged that "these stories are true." Lena Headey wasn't buying it, however, and she let everyone know exactly what she thought of Louis C.K.'s apology.

Shortly after the bombshell report by The New York Times about the sexual assault and harassment allegations against Harvey Weinstein, Game of Thrones' own Cersei Lannister, actress Lena Headey, shared her own experiences with the film producer.

In several tweets, Headey shared how Weinstein made suggestive comments and lewd gestures toward her in their first encounter. She explained that in their second meeting, Weinstein ushered her to his hotel room under the guise of having a script for her to read. Headey told him that she didn't want anything other than a working relationship with him. When his hotel key card didn't work, Weinstein got angry and walked out of the hotel, whispering in her ear before she left, "Don't tell anyone about this, not your manager, not your agent."

A couple weeks later, the report about Louis C.K. surfaced.

Some were impressed that C.K. seemed to own what he did. Many struggled to find the actual apology in this long, rambling statement full of vague regret and self-aggrandizement. Lena Headey wasn't falling for C.K.'s words — in fact, she had some strong ones of her own for him:

You tell him, Cersei! C.K. ended his statement with, "I will now step back and take a long time to listen." Listen to that, bucko.

When pressed, she offered more information regarding her position on C.K.'s statement of admittance.

"He didn't apologize. FULL STOP," she wrote. Headey — and many others — believe that C.K.'s statement, full of the kind of self-deprecation that's been a key part of his act for years, was really just an appeal to try to remain likable and liked amidst numerous accusations that he's been horribly abusive to several women. Sorry, Louis, not gonna fly.