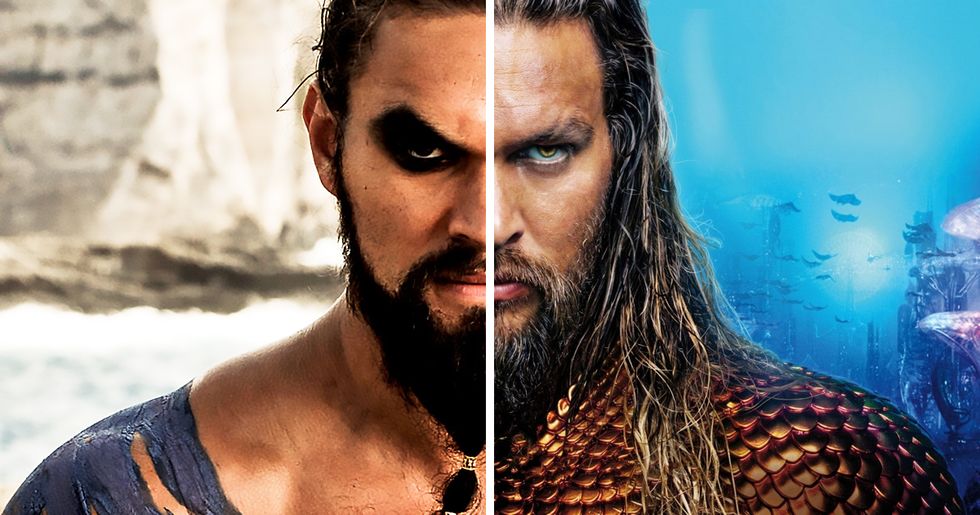 If you’re a Game of Thrones fan, you’ve definitely had this experience: you’re watching a show or movie (like Suits, X-Men: Apocalypse, or even Love Actually) and you see one of your favorite characters seemingly plucked out of Westeros and plopped into a new environment. It’s always weird to see them in a different context than you’re used to, but we love rooting for some of our favorite actors as they make moves outside of the dark world of Game of Thrones.

Below, we’ve rounded up some of our favorite Game of Thrones characters—from the major (Mother of Dragons, anyone) to the short-lived (hey, the body count on this show is off the charts!).

Read on and prepare to have your mind blown as you see some of your Westeros favorites in a whole new light.

You can’t put her in a box! The Mother of Dragons played the romantic lead in Me Before You and took on the role of Sarah Connor in Terminator Genisys.

Game of Thrones was actually Turner’s professional acting debut, but since then she played Jean Grey in X-Men: Apocalypse.

He’s been in the biz for quite a while, getting his start in Baywatch and going on to play the title roles in Conan the Barbarian and Aquaman.

You’ll remember him as Sandor "The Hound" Clegane, but he’s also been in Hot Fuzz and Shameless.

He played Stannis Baratheon in Game of Thrones, and has had a long acting career, with roles in everything from The Hours to Zero Dark Thirty to The Tunnel.

She made her professional acting debut as Arya Stark, but since then she’s been in The Falling, Doctor Who, and even a tv movie called Cyberbully.

She plays Missandei, but she made her big break on the British soap opera Hollyoaks. She’s also been in Furious 7, The Fate of the Furious, and Maze Runner: The Scorch Trials.

In addition to playing Melisandre, aka the Red Woman, van Houten has also had major roles in Valkyrie and Repo Men.

Long before he was Jojen Reed, he played a smitten young boy in Love Actually. He was also in The Maze Runner and even voiced Ferb in Phineas and Ferb.

You know her as Catelyn Stark, but she’s also played Ava Hessington in Suits and Hermione Granger’s mother in Harry Potter and the Deathly Hallows: Part 1.

He played Edmure Tully on Game of Thrones and has been in several other series, including Outlander, Catastrophe, and The Crown.

After his turn as Robb Stark, Madden went on to play Cinderella’s Prince Charming. He’ll also be in the upcoming movie Rocketman.

On GoT, she plays Olenna Tyrell, but she’s been acting since 1957. Needless to say, she’s racked up plenty of credits since then, from A Midsummer Night’s Dream to the James Bond movie On Her Majesty’s Secret Service.

In addition to playing Jon Snow, Harington has also done voice work, lending his voice as Eret in How to Train Your Dragon 2 and Admiral Salen Kotch in the video game Call of Duty: Infinite Warfare.

You might remember him as Archmaester Ebrose, but he’s had a long career as a character actor. He played Professor Slughorn in two Harry Potter movies, Harold Zidler in Moulin Rouge, and Bridget’s dad in Bridget Jones’s Diary, just to name a few.

He plays Jorah Mormont on Game of Thrones, and has been in plenty of other projects on the big and small screen. He’s been in three Resident Evil movies as well as Lara Croft: Tomb Raider.

On Game of Thrones he played Walder Frey, and you may also remember him as Argus Filch from the Harry Potter movies.

Aside from playing Oberyn Martell, Pascal has had recurring roles on The Mentalist and Narcos, and was in If Beale Street Could Talk and Kingsmen: The Golden Circle.

We all know Gleeson as Joffrey Baratheon, but he also had a role in Batman Begins back in 2005.

Before she was Ellaria Sand on Game of Thrones, she was in Exodus: Gods and Kings. She’s also voiced several video games, including Dragon Age: Inquisition and Mass Effect: Andromeda.

The late Peter Vaughan played Maester Aemon, but he had a long, successful acting career before that. You might recognize him from The Remains of the Day, Death at a Funeral, and Straw Dogs.

In addition to playing Lady Crane, she’s also been in The Babadook, Assassin’s Creed, and Miss Fisher’s Murder Mysteries.

You probably recognize him as Lord Varys, but he also played Edward Darby on Suits. He’s going to feature in the upcoming series Dublin Murders as well.

In addition to playing Tywin Lannister, Dance has also had roles in The Imitation Game, Gosford Park, The Phantom of the Opera, and Pride and Prejudice and Zombies.

He played Roose Bolton on Game of Thrones and has also had recurring roles on the series Genius and The Fall.

We all know him as Tyrion Lannister, but Dinklage has had a ton of other roles, including in Nip/Tuck, X-Men: Days of Future Past, and Avengers: Infinity War.

He played Petyr 'Littlefinger' Baelish on Game of Thrones, and has also been in Peaky Blinders, Quantum Break, The Wire, and The Dark Knight Rises.

On Game of Thrones she’s Brienne of Tarth, but she also played Captain Phasma in Star Wars: The Last Jedi.

You might remember him as the Three-Eyed Raven from Game of Thrones. His long acting career includes roles in The Exorcist, Shutter Island, and Star Wars: The Force Awakens. Be sure to share this article with all your GoT-loving friends!