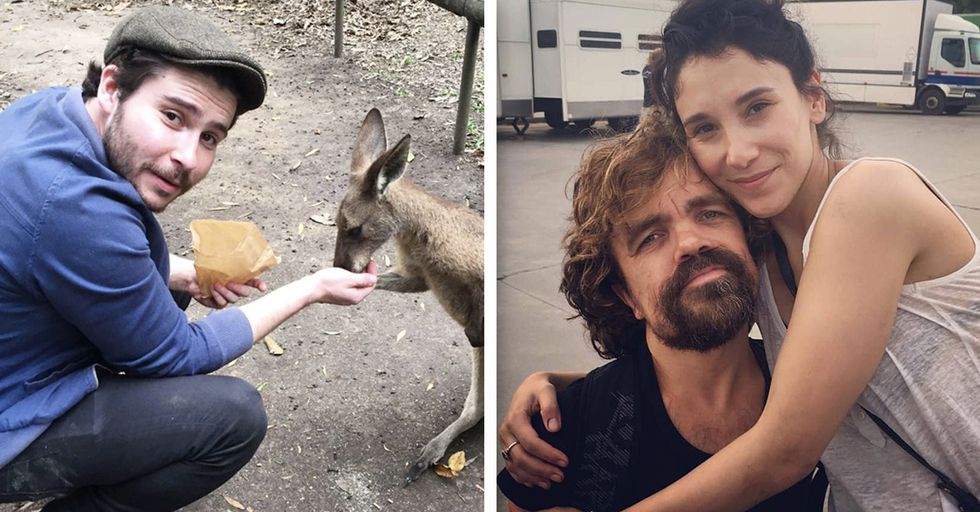 More contagious than the flu and more addictive than a JUUL to a frat boy, Game of Thrones has completely consumed our friends and family and there's no point in fighting it off.

There are a million and one reasons to love this show, but the undeniable and prominent thread that ties together this obsessive fandom seems to be the complexity of the characters and the talent of the actors who play them. I don't think there is a single soul out there who isn't constantly talking about the show and all the complicated relationships within the series.

Each character, even the ones who have died off, is a piece of work. But where were they before they found themselves on the hottest TV show of all time? It's quite eye-opening to see them out of costume, and even more so, see what other shows they've been a part of.

Are you caught up?

We are currently knee deep in season 8 and there's been enough drama and deaths for our weary hearts to handle. But, there will be no spoilers ahead, so if you aren't caught up, don't worry, this is a safe place.

If you haven't, well I don't know how you've made it this far in life.

This is the final season, so we are soaking it all in.

Along with the rest of the world, we are seriously devastated at the news that season 8 is the last and final season of the show's series.

As it comes to a close, we're getting a little nostalgic.

I have a deep connection with the characters and the story of GOT, so it feels really hard to let it all go. But before we do, let's get one last good look at the cast, a real look at who they are and what other movies they have been a part of.

Love her or hate her, Cersei is a key leader in the show. Ruthless and fierce, you can't deny that without her, the show wouldn't be the same. But you won't recognize her when she's not in character!

When she's not killing people on GOT, she's slaying the red carpet. You might recognize her from movies like 300, The Brothers Grimm, The Remains of the Day and The Parole Officer.

Bronn had an epic entrance to the show and is now a crowd favorite. I am a huge fan of his character and am continuously impressed with Jerome's dedication to his role. Although Bronn's loyalty may sway at times, it's hard not to root for him.

He cleans up nice for a guy who sleeps so much on the show! Jerome has played roles in shows like Black Mirror, Soldier Soldier, and Ripper Street.

Again, this might not be your favorite character, or the most trustworthy (must run in the family). But Nikolaj, the amazing Danish actor, makes it hard not to love him.

Nikolaj is a big deal in Sweden.

You might recognize him from The Other Woman or Black Hawk Down, which are completely different movies, but shows the range of Nikolaj's abilities to commit to different characters.

I have so much to say about Jon Snow, but I'll try my best to keep it short. He has put us through an emotional roller coaster but is seemingly the most honorable character on the show.

Kit has stolen our hearts.

A real charmer, Kit has been on the cover of quite a few magazines and one killer episode of Saturday Night Live. He's also been in Pompeii, Silent Hill: Revelation, and also voiced "Eret" in How to Train Your Dragon: The Hidden World, which is absolutely incredible.

I don't like playing favorites, but Daenerys really is the exception, and I know I'm not the only one who thinks that. The development of her character has been so amazing throughout the seasons, and Emilia's talent spreads much further than just GOT.

Who isn't obsessed with Emilia?

She covers everything from action to romance to fantasy, and she absolutely nails every role. From Solo: A Star Wars Story to the romantic movie Me Before You all the way to the action-packed Terminator Genisys, there's really nothing Emilia can't do.

Okay, maybe it's a tie between Arya and Daenerys for my favorite character. Both ladies play killer characters and Arya destroys any and all stereotypes in the Seven Kingdoms.

Maisie is unstoppable, and she's just getting started.

At only 22 years-old, Maisie has become an overnight sensation and obsession for many fans. She has starred in The Falling, Cyberbully, and The Book of Love. I believe she's just getting started in her acting career, so we can only hope to see her in a lot of other films and TV shows in the future.

Initially, Sansa was not the most revered character, but in recent seasons, she has really stepped up in leadership and fans have grown a new love for her. Even if you don't love Sansa, it's almost impossible not to love Sophie.

Or should we say, Sophie Jonas?

Sophie is absolutely stunning and has quickly become a star, not just because of her relationship with Joe Jonas either. Although Sophie is relatively new to the big screen, she has played some major roles in the X-Men series, starring in both  Apocalypse and Dark Phoenix.

Joe and Sophie's relationship is the definition of couple goals, but it's Sophie and Maisie's friendship that is really the most amazing thing ever.

Although he can be a total chicken, Sam is crazy smart and we stan his friendship and dedication to Jon Snow. It's my favorite bromance in the series. John is a true star and has killed some other major roles outside of GOT.

He's as talented as he is lovable.

Starring in the other hit TV show Shameless and Merlin, he does great in TV series and is quite hilarious in interviews. Also, he's an amazing drummer. John is just full of surprises.

It's hard not to love Tyrion due to his boldness, which at times can be annoying, but for the most part, we're always rooting for him. Peter has an impressive career prior to GOT, with everything from comedy films to plays in New York City.

Peter played a role in Elf alongside Will Ferrell, but he has been in a lot of other iconic films. He starred in Three Billboards Outside Ebbing, Missouri, and Avengers: Infiniti War.

Brienne is another badass in the show whose loyalty outshines pretty much every other character. She's strong, protective, and totally knight material.

You really should recognize this woman.

Gwendoline has graced us with her presence in movies like The Hunger Games: Mockingjay Part 2, Star Wars: Episode VIII-The Force Awakens and Star Wars: The Last Jedi. Yeah. She's a big deal.

The underdog that has proven her worth, Missandei is much more than just a handmaid.

She's got a thing for action.

Rory McCann as The Hound.

Even though we can barely trust him, we can't deny his thirst for survival--it's actually quite impressive he's made it this far. He has made it through the flames of the show and this big dude is hard not to love.

Roy is a tall glass of talent.

He starred in films like Hot Fuzz, Alexander, State of Play and Heroes and Villains. Roy stands at 6'6" making him one of the tallest actors on the show. I would not want to get in a fight with this guy.

With intense loyalty to the Lord of Light, her powers keep fans amazed, even if they sometimes hate her.

She's got an amazing background.

She's starred in a lot of Dutch films but has played a key role in American films as well. You might recognize her from Black Book, Valkyrie, and Repo Man. She holds her own in movies starring next to actors like Tom Cruise and Jude Law.

The Three-Eyed Raven, as weird as he may be, is a key character, even if we don't really understand everything that's going on in his head.

Another young and talented actor.

Isaac is only 20 years old and has done an incredible job in the few roles he's taken on. You might recognize his voice from playing "Eggs" in Boxtrolls, but he's also starred in The Awakening and Closed Circuit.

This cast keeps getting better and better. I was already wildly impressed with their talent, and now, I have an entirely new reverence for the entire cast.

Let's just say, our lives will never be the same.

We are eternally grateful for Game of Thrones and the cast and crew that pulls the show off. Go ahead and share this with everyone you know who's freakishly obsessed with the show to give them more reason for why this is the best show ever created.