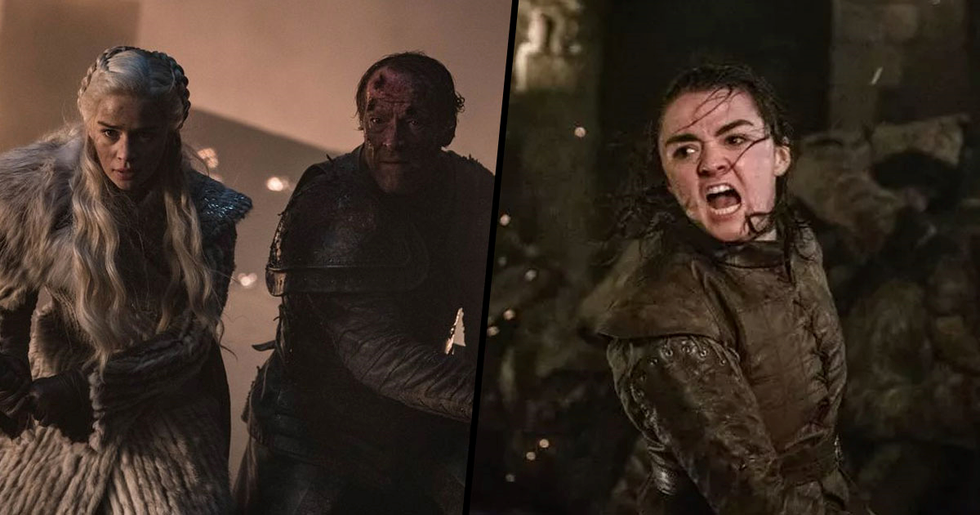 We watched last night's GoT episode with a mixture of excitement and trepidation.

But with greatness comes great sacrifice. And we were understandably worried about the imminent deaths that would ensue.

And quite rightly so.

Some were predictable but others . . . oh my good god!

We have each and every one of these graphic and violent death scenes below...

The third episode of season eight certainly did not disappoint.

The much-anticipated and massively-hyped Battle of Winterfell finally took place. We could barely contain ourselves as the opening credits rolled.

This battle was set to be the biggest and most epic battle that GoT had ever attempted.

The living and the dead finally faced off in this one hour and twenty-two minute long episode. Basically, it was the good guys versus the bad (and dead) guys.

The battle in question actually took eleven weeks to film.

The cast had to endure icy rain, piercing wind and lots and lots of ankle-deep mud. But with a promise that it would rival the Battle of Helm's Deep from Lord of the Rings: The Two Towers, it appeared that it would definitely be worth it.

And, of course, we were prepared for the worst to happen.

A battle on this scale was always going to have casualties, and lots of them. The only question was who would we lose? Not Arya, please not Arya! We couldn't cope if she died!

Last night we finally got to watch the drama unfold.

And it was the most exciting and thrilling GoT episode that we have ever had the pleasure (maybe that's the wrong word) to witness. If you are a particular fan of blood and gore - let's face it, you kind of have to be if you are a GoT fan - then it is an unmissable episode. But, if you are tight on time, keep reading to watch all of the death scenes in their bloody glory right here...

Let's start with the good news.

The good guys won! Yes, the Night King and his Army of the Dead were defeated. But how? And by whom? It doesn't look like Daenerys and her dragon will manage it this time... Keep reading to find out if she succeeded later in the episode, or if it was someone else who managed to overcome the King...

But, now, let's check out the first casualty of the night.

Eddison Tollett, the former commander of the Night's Watch, was the first good guy to die and, true to form, he remained loyal to his brothers right to the very end.

With his life being taken by a wight whilst protecting Samwell Tarly.

In typical GoT fashion, Edd was viciously and gorily impaled by a wight, thus becoming one of these zombies himself. Not the nicest way to go, but at least he went out with a bang! Well, it was more of a squish really...

And fans of his were devasted.

Mostly due to the fact that he had to die a virgin. He definitely should have put losing it on the top of his bucket list before heading into battle. If you can't break the rules just before your imminent death, when can you?

Next up was Lyanna Mormont.

Now we were truly sad about this. We love a bit of Girl Power and brave Lyanna was like the Spice Girl of GoT. At the time of the battle, she refused to hide in the crypts with the other women and children; instead, she decided to kick some undead ass with all the men.

And kick some ass she did.

Before she was sadly killed by one hell of a giant zombie, that is. She, too, became a wight after this. But not before killing the giant! She fought until the bitter end! What a girl!

And fans are singing her praise all over social media.

She is a total badass!!! If you're going to die in battle, then go out kicking and screaming, that's what we say! Lyanna definitely did not disappoint. An epic and heroic death for an epic and heroic gal.

But we didn't have long to mourn before yet another character shuffled off his mortal coil.

Beric Dondarrion also perished. And, yes, he's actually gone for good this time. Beric has already died six times previously, and each time he's been brought back by Thoros of Myr.

Maybe it was his destiny to die at this particular battle?

He certainly perished protecting one of this episode's most vital characters. Yes, we are talking about Arya. And it was another particularly gruesome death; he was overrun by the undead and stabbed... a lot.

Especially as they are used to him dying and being brought back to life. This time, he's gone, never to return. It's the end of an era!

And just as we were starting to like him...

Theon Greyjoy was snatched away from us! But how? Was he heroic in his final minutes, or did he revert back to his spineless ways?

He was heroic! Hoorah!

Theon and his men were trying to keep Bran safe - a pretty arduous task, to say the least. And Theon did extremely well in doing this until he was faced with The Night King himself, when he was then impaled on a pike. Ouch. But, thankfully, not before he was forgiven by Bran and finally obtained true redemption from his previous sins.

And then there was a bit more good news.

At least for the good guys. The Night King was vanquished! And by a dagger made from Valyrian steel no less. But who was it that swung this mighty blow?

Our beloved Ayra, of course!

Who else could it possibly have been? The Night King had gone to find Bran in order to eliminate the memory of human civilization, as you do, and just as he was about to draw his sword, he was attacked from behind. By the brave and unwavering Arya. Whew, this was one tense scene!

By defeating him, she also destroyed all threat from the undead.

The moment that The Night King shattered into a million pieces, the White Walkers and all the others that they had reanimated, also bit the dust. Woohoo!!!! All in a day's work for the mighty Arya Stark, though. We bet she barely broke a sweat.

You'd think this would have been the end of the bloodshed but oh no.

Daenerys' right-hand man, Jorah, died as he had lived, fighting by her side. Jorah Mormont, who suffered what was possibly the most tragic case of being friend-zoned ever, actually put up a pretty good fight before he eventually succumbed to death.

But at least the love of his life had the decency to look sad when it happened.

Dying may even have been worth it for him, just so he could see how much he actually meant to her. We were literally weeping into our GoT themed snacks.

Fans were pleased to see her soft side for the first time in a long time.

well, a bit apreciation to daenerys would not make me retarded anyway. in this episode i love her when she cried at… https://t.co/uucOiH6gmk
— Apinja Anastasia (@Apinja Anastasia)1556541733.0

Maybe she's not quite as cold-hearted as she makes out to be. Or, more likely, she was just tired and emotional after a long and arduous battle...

And the last to go was Melisandre aka The Red Woman.

You remember Melisandre! She's the creepy religious priestess who thought nothing of burning Stannis Baratheon's daughter at the stake as a sacrifice! There was also that truly horrific scene wherein she gave birth to the shadow. She briefly starred in season seven, promising to return to Westeros once more to face her end. It seems that she predicted her own death.

She wasn't exactly the most likable character, so you're probably thinking that she finally got her comeuppance.

But not only was her death a pretty pleasant one compared to the others who were mostly impaled or stabbed, she also had the benefit of knowing that her time was up - she told Davos that she would "be dead before the dawn."

But at least she did a bit of good before collapsing at the gates of Winterfell.

The Red Woman showed up right before the battle began and not only armed everyone with fire, but also guided Arya to ultimately win the battle by killing the Night King.

How exactly did she die in the end?

Once she had done her bit in the battle, she simply removed her necklace, turned back into an extremely old woman and succumbed to the winter. Pretty low-key, are we right?

So, seven characters died in total but somewhat surprisingly all of the major characters made it through the night. Although some a little more heroically than others.

The Starks, in particular, did pretty well with Sansa, Arya, and Bran all living to fight another day. Plus, of course, Jon Snow and Daenerys, which we could have predicted really...

But seriously how is Grey Worm still alive?

We literally have no idea how he made it through the battle without kicking the bucket. But, somehow, he did, and he appears in the trailer for next week's episode!

Now we're left with the exciting prospect of what will happen next...

The Great War may be over, but there is everything to play for in The Last War... How can we possibly wait a week to find out what happens next? If we find out any spoilers, we'll let you know!