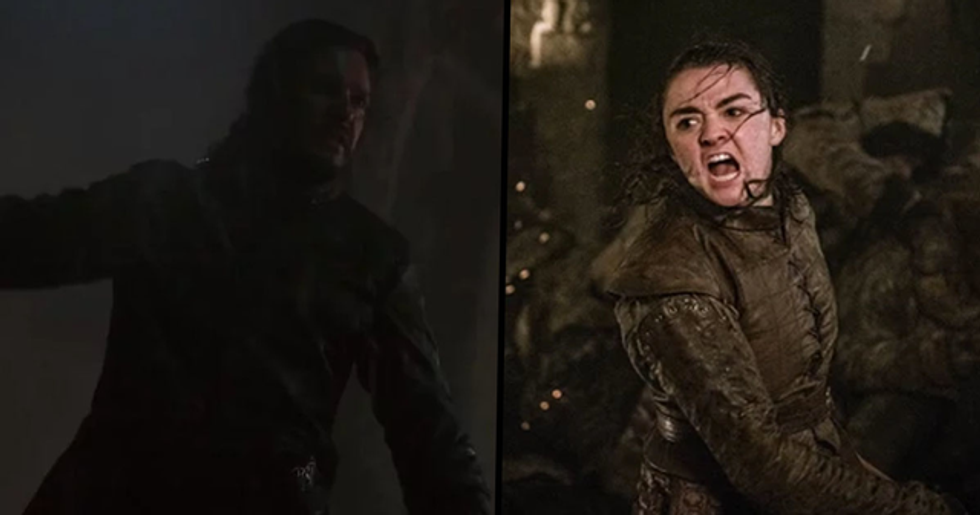 As Game of Thrones nears its conclusion, there are still a lot of epic battles that need to be won. But it's unlikely that any will be as epic as episode three, "The Long Night." In the incredible, feature-film length episode, multiple main characters joined together to battle an enemy even greater than themselves, the zombified White Walkers, led by the terrifying Night King. And although reviews of the episode have been largely hugely favorable, viewers had one distinctive complaint.

As the name of the episode suggests, the battle took place over the course of one night. Great for a spooky atmosphere, sure - but not so great for being able to see what's going on... Fans around the world complained that the episode was just too dark. And now the show's creators have spoken out on the subject with a slightly strange excuse.

Game of Thrones is currently in its eighth and final season.

Which may explain why it seems to be all anyone wants to talk about at the moment!

There are only three episodes left.

And there's still so much left to sort out! But one of the biggest loose ends was tied up on Sunday.

For seasons now, Westeros has been under threat.

The White Walkers, a group of zombified men and terrifying creatures, have been threatening to break over the Wall for some time.

They have a truly frightening leader.

The Night King is one of the scariest and most memorable television villains of all time - which is pretty impressive, considering we barely know anything about him.

What's the scariest thing about him?

He can raise the dead to fight, mindlessly and fearlessly, in his evil army. This means that his ranks are ever-growing.

Game of Thrones is well known for its battle scenes.

The season six epic, "Battle of the Bastards," is one of the show's most popular episodes. The creators really know how to use fights to tell a story.

We've even seen battles with White Walkers before.

In the season five episode, "Hardhome," we saw a horrifying fight between the White Walkers and the Wildlings.

But we knew that the worst was yet to come.

Because the White Walkers were not yet defeated - and they had crossed the Wall and managed to start making their way into Westeros.

The place they were headed?

Well, it was the northernmost of the lands of the seven kingdoms, the Stark residence, Winterfell.

And on Sunday night's episode, it all began.

The episode was entitled "The Long Night," and was an epic, eighty two minute battle scene set entirely within the castle.

It had everything that Game of Thrones fans love.

Including all fans' favorite characters (together in one place, for once), brilliantly written one-liners, series-old tensions coming to a head, plus, of course, dragons.

Some characters finally met for the first time.

Including Bran Stark and the Night King, who many have long suspected have a deeper connection than we know.

The episode supplied some tragedies.

For example, the death of Theon Greyjoy, whose redemption arc over the eight seasons has been truly amazing to see.

But it also gave us a deeply satisfying conclusion.

Almost unarguably the biggest badass on the show, Arya Stark, truly shone in the episode, while fans cheered her on from the comfort of their homes.

Because it was Arya who managed to do what no one else could.

She defeated the Night King, and, by doing so, became the true saviour of all of Westeros. Not bad for a teenage girl!

It's safe to say that the episode was a big deal.

It seems that everyone out there watched it - and pretty much everyone found it incredibly satisfying.

But there was one aspect that people particularly loved.

A girl has a name. Everything that happened to her leads to THAT scene. The girl is Arya Stark of Winterfell.… https://t.co/VHgew6ujIt
— Harshal (@Harshal)1556617426.0

The fact that Arya was the one to save the seven kingdoms was truly magical. We've watched the character since she was a young girl, and now she's the real hero of the story.

Of course, people had their jokes.

But the fact still stood - fan favorite, Arya Stark, managed to defeat the Night King and save, basically, the Game of Thrones realm.

And we loved it!

It was particularly surprising that we got the sort of ending that we actually wanted from Game of Thrones, which tends to focus more on shocking, rather than pleasing, the audience.

After all, now the Battle of Winterfell is over, there's still the matter of who sits on the Iron Throne to be decided. Surely Cersei can't win?

People also pointed out this coincidence.

Last week, Avengers: Endgame was released - and the story has a hero with a pretty familiar sounding last name.

People also pointed this out.

It was Arya, not Jon or any of the other skilled warriors, who managed to pull of the most important kill in the battle.

Even actors from the show had something to say.

Sophie Turner, who plays Arya's sister, Sansa, had a typically on-brand, hilarious reaction to the battle scene, which she shared on social media.

However, there was one big complaint.

As the episode title suggests, the entire battle took place at night. But that caused issues for some fans, who thought everything was just too dark.

This was particularly confusing, as it was a battle sequence.

With everyone moving so fast, and people constantly running into one another, it became pretty hard to distinguish what was actually happening.

Some even thought that it might have been a mistake.

But one of the show's cinematographers has spoken out about people's concerns regarding the episode's lighting.

According to TMZ, he said that he believes that it's the fault of the streaming services and the devices that people chose to watch the show on.

He claims that there was a reason for the low light.

In order to create a more cinematic experience, Wagner relied on lower levels of light. He claimed that if the show is watched with the lights off, like in a movie theater, it looks perfect.

Wagner is refusing to back down, though. He told TMZ, "We tried to give the viewers and fans a cool episode to watch. I know it wasn't too dark because I shot it."

But viewers of the episode are insistent.

We're all for artistic and atmospheric television making - but we're just not sure if there's any point in making shows so dark that the story gets lost! How did you feel about the episode?