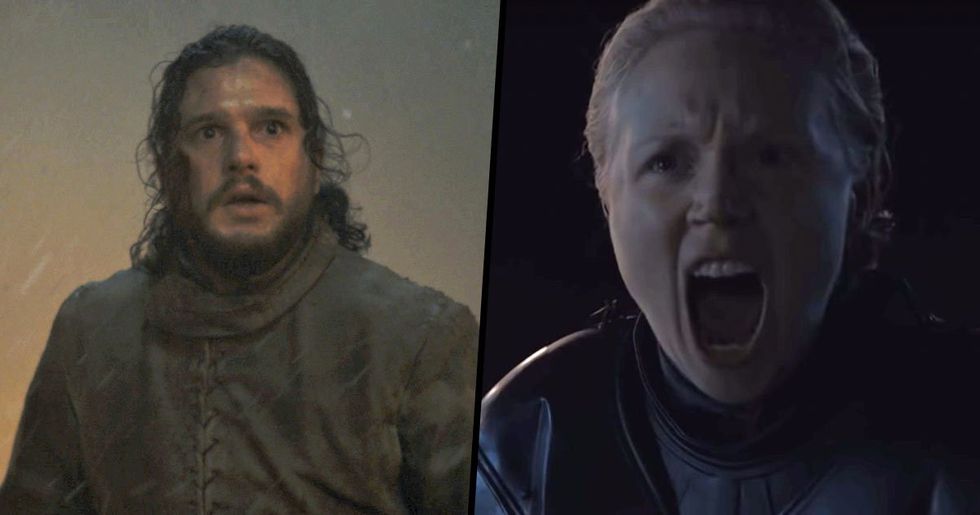 GoT season eight, episode three - what a rollercoaster of emotions! At over an hour long, the episode made us feel everything.

Some of our favorite characters died, some survived, but most importantly, the Night King was defeated!

Game of Thrones fans were so shocked and moved by the episode that they went on social media to share their experiences as soon as it was over.

Some viewers agreed that it must have been the best episode in entire GoT history. Others felt so exhausted that they seriously considered calling in sick today.

But it wasn't just the plot that made them feel like they were in the battle too.

A lot of viewers complained about one surprising thing that the show's creators must have missed. Or did they?

If you're a hardcore Game of Thrones fan and are still recovering from last night's thrill, this page is for you.

Spoiler alert if you're not caught up yet!

We're officially half way through the final season of GoT.

The third episode, "The Battle Of Winterfell", aired on Sunday. It left fans speechless. So they went on Twitter and Facebook to share their reactions. Naturally.

One viewer, Jennifer Moorby, even called it "the best cinematic experience" ever.

Amanda Denise agreed, "The best show ever and tonight was the best episode out of all the seasons!!"

Stacie Ketchum said, "Okay, my people, who else is having a panic attack over what we just witnessed?! Never in my thirty-eight years did I EVER think a damn show could get me so worked up and emotionally invested in a BATTLE! SERIOUSLY, HBO, WTF?! What is this wizardry?! ??❤"

Hannah Bradley: "I think I almost peed myself 4 times because I couldn’t pause the tv at my hotel. Worth it."

Armida Martinez Perez: "Who had the air to tweet!? I didn’t breathe the whole episode."

Rochell Dickey: "My nerves are still bad! I feel like I had fifteen Red Bulls and 5 cups of Starbucks! I need a drink! ??"

Robin Hemsworth Smith is new to the show and still couldn't believe how good the new episode was. "I only started watching this last season so if I am freaking out...and I am not emotionally invested...I can only imagine how you diehards feel! HOLY SHIT! What a show!"

Holly Paramapoonya: "I feel like I just fought the damn battle I’m so tired."

One Twitter-user, "GOT kinda funny memes", said what we were all thinking: "Anyone: 'What’s your favorite movie?' "Me: 'Season 8, Episode 3 Game of Thrones."

Christy Blank: "I’m emotionally exhausted. I may take tomorrow off."

One thing that everyone was happy about (and even surprised at) in particular was the fact that in this episode we witnessed very few deaths - we all know how much GoT loves killing off its main characters!

Laurentee Shirley said, "Anyone else just happy that fewer people died than you thought??? Cuz my list of deaths was long and this actually wasn’t so bad ?"

Amanda Soushek: "So many people are still alive that I thought would die! Also, Daenerys has like no army now, RIP all the Dothraki and Unsullied how tf does she plan on beating Cersei’s 20,000 strong?"

Did you notice how little dialogue there was in the episode?

We bet that Mara Landon was one of very few who did: "As a whole, especially for the length, this episode had so little dialogue and it was weird but worked so well."

Overall, the episode left its viewers shocked like never before. Here are some of the best responses to the rollercoaster that episode three was.

'Weird Alex' Pareene tweeted, "Lmao so wait for the rest of the show they're going to fight a pregnant lady and a pirate?"

Another viewer, Adam, replied saying, "It will be, some might say, a game of thrones."

Oceanus Procellarum also added, "I predict that they devolve to fighting each other in the end."

No one will ever forget Arya's biggest moment.

Who could have predicted that Arya would be the one to beat the Night King and save the day (or night, to be exact)?

Despite being so young and tiny, Lady Mormont showed incredible courage to the very end. We applaud you, Lyanna!

We're still thinking about the secretly intense scene with Bran and Theon.

Remember that horrifying vision Bran had that ended with the Night King reaching for him? Sometimes we don't think that Bran's gift is really a gift...

But Arya’s incredible last-minute performance was so unexpected that once the show was over, fans flooded Twitter with memes.

One user said, "Arya did in a matter of seconds what Jon couldn’t accomplish in a couple of seasons."

She really made Ned proud that night.

But where was Cercei when everyone was dying?

Her appearance in the third episode was doubtful before it even aired. We know that she was busy holding her ground at King's Landing, but still…

This one wasn't so funny when we watched the scene unfold.

But we've learnt that you’ve got to trust Sansa. She knows what she’s doing.

The Night King and Bran's stare-off was super intense.

Bran and the Night King really did this for like 4 minutes. #GameofThrones #DemThrones https://t.co/zXhx3TfpsF
— cowboy beWAP (@cowboy beWAP)1556505577.0

The longer the moment lasted, the more convinced we were this was the end for Bran.

But there was one more thing that drew the viewers' attention and it wasn't part of the plot. Well, not really.

Fans across the country complained about how dark the episode was.

Not just in tone, but in the lack of light too.

Shemah Sham wrote, "I was squinting my way through the whole episode. I've got a headache now."

Turns out, turning up the brightness of the screen didn’t help.

Kendalle Valoreyne Skorek: "I know I was yelling for those damn dragons to light shit up so I could see better and I had my brightness turned way up. ?" Others even tried turning all of the lights in their room out.

And some tried even more drastic measures.

Like Kiser Ryan who "literally had to pause and adjust [his] TV's brightness, contrast, color settings and turn off every ambient light in the apartment to see what was happening. Now everything else is too intense..."

Eve Goldbloom: "My heart was beating and I've got a headache but loved every minute, yeh it was dark also turned off the lights, on to next week, when hopefully Cersei get hers."

But at least we got the full experience!

Lindsey McConnell was most likely right when she said, "It's supposed to be like that! It's what it would've really looked like. Added to the suspense and anxiety!!????" Now we know what it's really like to fight in battles at nighttime.

Thank goodness Beric Dondarrion was there with his sword.

Beric Dondarrion finally revealing his purpose in this series and it is to use his flame sword to light up some way-too-dark battle scenes
— Chloe Gordon (@Chloe Gordon)1556502852.0

He helped to lighten the scene for his fans. But he did have help.

I would like to thank Melisandre for increasing the lighting in this episode by 100 #GameofThrones #GoT https://t.co/ngIQ5tHaDO
— Nora Dominick (@Nora Dominick)1556501735.0

Alison Slaney: "Melisandre took her dead time going out to light that trench."

Amelia Gaskins wrote, "I turned off all the lights in my house and was totally fine. I loved the horror movie feel it added! But also... the battle was at night, with the night king...yeah, night is dark. Crazy concept. ??‍♀️"

Mona Hasan: "They were fighting the army of the dead, were you expecting sunshine?"

All of us squinting to see if Jorah had blue eyes or not when he came running back to the army #GameofThrones https://t.co/wo38uMOvlY
— #ThronesYall (@#ThronesYall)1556500768.0

Sarai Arenas: "Seriously, I prepared for this all week. Did other fans think this was going to be sunshine and rainbows? We've known for 3 years that to go to war with the wights it was going to be dark and ugly."

Some fans were thankful that they couldn’t see the scary parts!

Best part of this episode is that it’s so dark I can’t really see anything to make me too scared. #GameofThrones #BattleOfWinterfell
— Jackie Baum (@Jackie Baum)1556501445.0

Like Gina Ramsay who said, "I’m glad it was dark - I could finally watch a battle without watching through my hands ?"