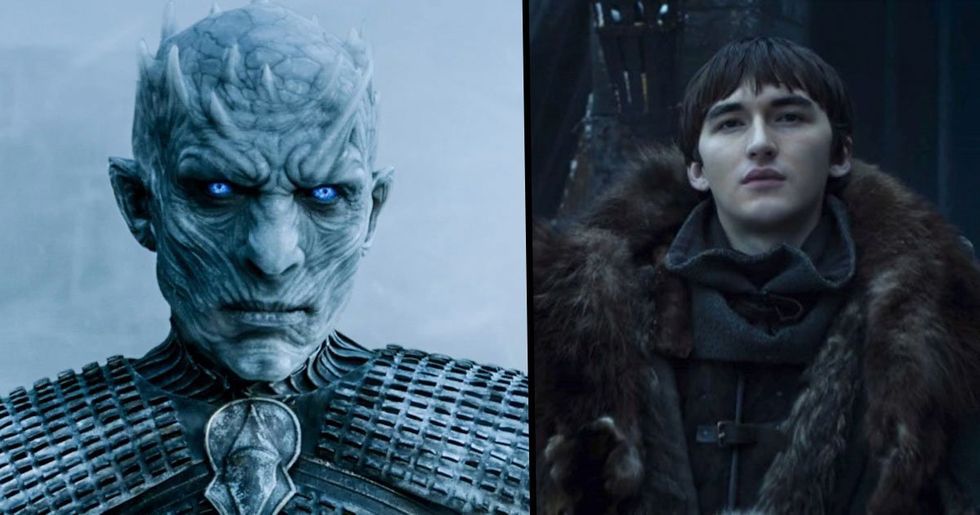 'Game of Thrones' Revealed Something Huge That We All Missed

Game of Thrones’ Night King is likely the most veiled character in the series. Very little is explained about his motivation or his personality. He doesn’t speak but marches southward with that same stony glare - leaving nothing but unyielding death in his path.

The absence of explanation surrounding the Night King has left Game of Thrones fans speculating like there’s no tomorrow - which may be the case if he gets his way.

In the second episode of the final season, we may have inched our way closer to fully understanding the show's villain.

Game of Thrones has spent a long time opening questions.

Now, almost two-hundred million dollars later, with the famed TV show at a close, it’s time to start answering them.

Fans have taken to attempting this themselves, in the dark.

And, certainly, the character that has attracted the most speculation is…

Lord of The White Walkers and supreme leader of the army of the dead, he’s a pretty scary guy.

Here’s one fan who thinks that Bran is the Night King.

Personally, we don’t see it - although they do have similarly shaped heads...

Here’s one who thinks that the Night King is the result of some white-hot walker love.

So who is the Night King?

Well, we'll attempt to answer that for you before we touch on what his motivation might be - stay tuned!

He was created by the Children of the Forest.

The Children of the Forest created him to use as a weapon in their war against humankind in The First Age.

But he became too powerful.

So the Children of the Forest had to join forces with the world of Men to push the Night King back beyond the wall.

And there he stayed.

For thousands of years. Until now…

He first appears in Season 4.

Here we see the Night King turning a wildling baby into one of his White Walker minions.

The Evacuation of Hardhome.

And here we see the reach of the Night King’s might.

His undead army quickly wipes out the defences and only a few lucky evacuees make it to the ships. What's more, the Night King demonstrates his power to raise the dead. It all looks a bit futile - clearly, winter has come.

Finally, we see him get a sweet new ride.

At the end of the seventh season, the Night King throws a spear into one of Daenerys Targaryen’s dragons, killing it and later reanimating it as an Ice Dragon.

The Night King uses his new ice dragon to destroy the wall.

Oh dear… there goes a thousand years of steady protection.

Something that must be noted…

Is The Night King’s strange connection to Bran - the show’s prophetic "three-eyed raven".

The Night King is able to see Bran in the vision-state.

He can even touch him…

His mark leads him to Bran’s hideout, under the tree.

Yes, a tree. Look - we know it’s weird, but you're either in or out at this point.

Fans have speculated constantly about this.

Well, as it turns out, the answer as to why the Night King seems so set on finding and killing Bran may be simpler than you think.

They threw us a bone in the last episode.

In episode two of the final season, an exchange between Samwell and Bran threw some much-needed light on the Night King’s motivations.

So, first, what does he want?

He wants to "erase the world, and I am its memory," says Bran.

And it’s in the use of the word "memory" that we receive our most recent clue.

Bran is the world’s memory.

He’s the three-eyed raven, he can see and remember everything. That’s the reason that the Night King wants him destroyed.

It’s the absolute destruction of it.

It’s not necessarily that Bran and the Night King share some special bond, it's simply because destroying the three-eyed raven would darken the memory of the world.

The Night King’s ultimate purpose cannot be achieved with Bran in the way.

That’s why he needs him gone. The death of Bran is the Night King’s burning book.

We know that it’s a little anticlimactic.

But often with these broad, swooping canvases, isn’t it refreshing to hear a slightly more simple storyline?

The theory works with the original story.

The Night King was created as a weapon against humanity. And that’s all he is. A silent, seemingly unstoppable pesticide.

The theory's even been backed up by the creators.

D. B. Weiss told Deadline, "I don't think of the Night King as a villain as much as, Death. ... The Night King doesn't have a choice; he was created that way, and that's what he is. In some ways, he's just death, coming for everyone in the story, coming for all of us. In some ways, it's appropriate he doesn't speak. What's death going to say? Anything would diminish him. He's just a force of destruction."

Imagine if the Night King spoke, or laughed, or had some sort of plan - he’d become instantly corny. He’s absolute Sauronesque evil. That’s it.

And our favorite characters have to make their last stand, for the sake of humanity.

All of the women and children have been gathered together and taken to the crypt for extra protection.

But they’ve missed something that’s as blindingly obvious as it is terrifying.

The crypt is full of dead people.

Yeah, and the Night King has the power to wake the dead. This is bad.