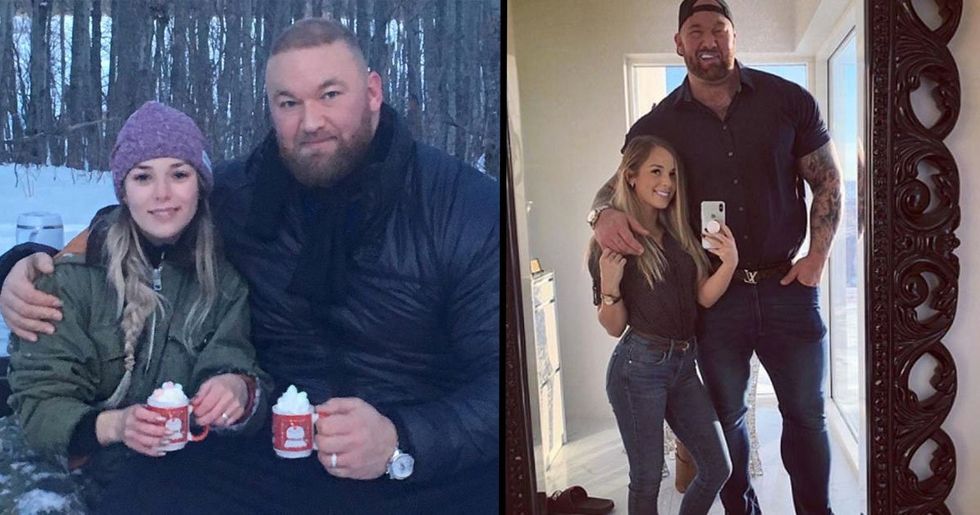 'Game of Thrones' Character, the Mountain, Makes Holding a Normal Mug Look Like an Optical Illusion

The Mountain is a character in Game of Thrones. The actor playing him has recently been pictured holding a mug from such an angle that made it it look like an optical illusion.

Gregor "The Mountain" Clegane is played by 30 years old Icelandic actor Hafþór "Thor" Björnsson, Insider says. If you're a fan of GoT you might already be familiar with this 6'9" tall, 400-pound giant and professional weightlifter.

Turns out, GoT had to put much less effort into making him appear large and powerful than you might have thought initially.

Two days ago he posted a photo on Instagram of himself and his wife, each holding a regular cup of coffee. But fans couldn't get over how tiny it looked in Björnsson's hand.

For over a decade now, Björnsson has been a record-breaking competitive weightlifter, Insider says.

In May 2018, he finally won the Strongman title after two years of just missing it.

For two years he came in second.

But in the 2018 World's Strongest Man competition that took place in Manila, Philippines, he finally got the gold he fully earned and deserved.

Björnsson managed to win half of the six events over the course of two days.

How did he do it and what does it take to get there?

Insider says Björnsson was always a big guy, but it wasn't just lucky genes that got him those 400 pounds of muscle.

It took him years of hard work in the gym, strict diet and a positive attitude.

He's loved sports since a very young age. At 12 he joined the basketball team and moved "huge stones and rocks" on his grandfather's farm to stay active.

At 16, he was already at his full height, and within 3 years he realized he "had a gift for strength."

At 20, an ankle injury ended his basketball career, so he started entering strongman competitions.

It helps him maintain strength and avoid injuries when lifting weights of hundred, and even thousand, pounds.

"I train with heavyweights five times a week. I'm in the gym so often," he says.

"But there's also a lot of other stuff I do outside of the gym. I do a lot of hot and cold treatments to make sure I stay injury-free, and so I can also train more often."

Diet plays a huge role too.

"Diet is very important to stay in shape, to stay strong. So I'm very consistent with my meals. I eat six meals every single day," he says.

"I eat mostly steak, rice, carrots, with some peppers, sometimes chicken. I eat so much, really. And definitely the hardest part of being in these competitions really is the diet."

Björnsson also says he has to eat around 10,000 calories each day to keep his body shape and strength.

"There's a lot of eating, if you want to stay the best," he told Insider.

"I have to eat every two hours, I have to fuel my body. And there's a lot of timing, prepping meals, when I eat them. I think sometimes, 'Is this worth it?' I'm always eating, and I'm never hungry. I'm always eating and working out."

But no exercise and diet routine can do the trick alone.

Staying positive is the key to success. "I don't have a least favorite exercise, I don't believe in thinking about that, about least favorites," he says. "I don't like to think that way. You have to have your mind positive towards everything in life, and I try to be very positive." "To be good at everything, you have to be positive towards it. I train and I work very hard toward my weaknesses, and I have any weaknesses, I work even harder to make them my strength."

However, Björnsson does have a favorite exercise.

"My favorite exercise is the deadlift, definitely that one," he says. Which makes sense since in the 2018 World's Strongest Man competition he set a deadlift world record by lifting 1,041 pounds.

So when on Friday he posted this photo of himself, his wife Kelsey Henson and the mugs of hot chocolate, people couldn't believe how truly big Björnsson is.

As Insider noted, in Henson's hands the cup appears of fairly regular size. But the same cup in Björnsson's hand looks more like a tiny shot cup.

The caption - Who's jealous?

It is however unclear whether he was asking if people were jealous of his wife or his tiny tiny creamy drink.

"That mug looks like a thimble in your massive paw," one said.

Another one wrote, "Thought that was a miniature mug until I saw the mug your other half is holding lol."

But Björnsson has always received strong comments about his unusual height and size.

The most popular photos on his Instagram account are those in which he stands next to his 19 inches shorter wife, Insider says.

Björnsson and the lifestyle and fitness blogger, Kelsey Henson, got married in October last year, according to Insider.

Insider also reports that while Björnsson height reaches 6 feet 9 inches, Henson is only 5 feet 2 inches tall. Now you know why the couple draws so much attention.

But LADbible says Björnsson is proud to be so tall, even if sometime's it's inconvenient.

"I like being tall. The only thing that has annoyed me being this tall and heavy is that you can't really fit anywhere," he says.

“You have to custom-make the bed [and] you can't travel with your bed. It's very annoying."

"Trying to fit into a cab or Uber is challenging as well. I have to fly business class because I just don't fit into economy. Otherwise, I'm proud to be tall."

I wonder if he also enjoys reading the hilarious comments that his fans leave under his photos.

Reacting to the mug illusion, Colin Wilson said on Facebook, “So is that a clock on his wrist then??" You know what, it might just be.

Martin Zomborsky said, "Well, give him espresso cup." I would love to see that.

Eric Lidiak said, "The real question is how much does he spend on groceries in a week?"

Bill Teat: "Glad I don’t have to pay for his dinner."

Patrick Chitwood joked, "Hope he doesn’t sneeze his drink away in that cold weather."

This one’s dark but funny: sinister.mustafa: "When you kiss her, do you suck her head like a lollipop?"

hjfishburn: "Legend says he drank it in one swallow...then ate the cup." badblueultras94boy: "What cup?!? That’s a ring on his finger lol."

Oliver Standring: "Wonder what he’d look like in Thailand."

2sasha4: "When a big man and a small woman have children are the children average sized or a mix of big and small?"

moosejr520: "I think a standard beer mug would suffice for coffee mug."

petener999: "Looks like she tamed the mountain." Leftinflames: "I love the difference in proportions of the mugs in your hands! I imagine if you order coffee, they just give you the pot."

What if that’s really an espresso cup, like some have suggested, only it looks large in Kelsey’s hands (because she’s short and all)? The optical illusion is now complete.