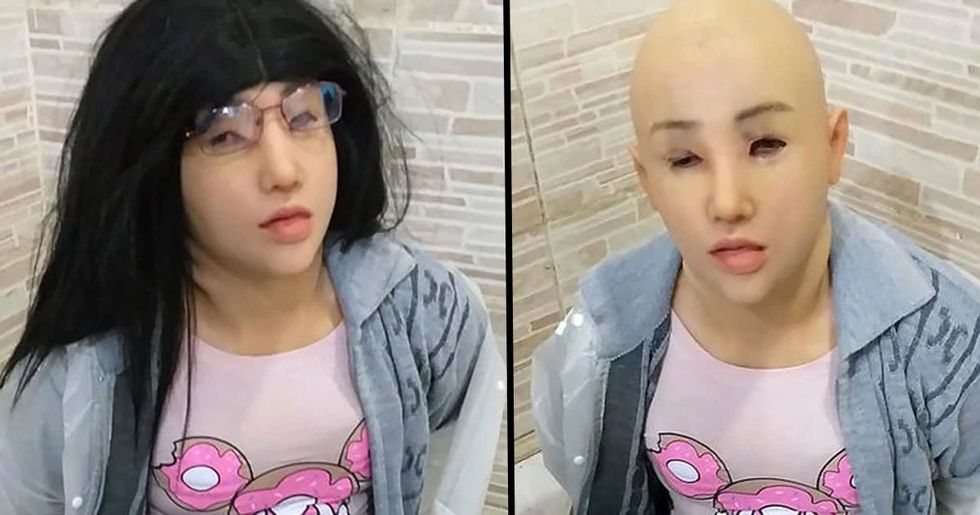 Just when you think that the world can't get any more bizarre, it only goes and proves you wrong. And, boy, do I have some extremely disturbing news for you.

A video has recently surfaced online of a man being forced to remove his disguise in front of police, only to reveal that he was a gang leader trying to escape from prison! I didn't know whether to laugh at his failed attempt, or be completely creeped out by the disguise. Now that I understand the full story, I'm settling on the latter. However, there has also, recently, been some shocking news about what happened to him after the ordeal.

Keep scrolling for all the details, including the full-length video of the criminal removing his weird costume.

We've heard many stories about criminals trying to escape from prison.

And most of the ideas that they come up with are extremely creative, just like scenes taken from an awesome action film.

Pascal Payat was arrested and jailed for thirty years after he was found guilty of killing a truck driver in France.

Payet had experienced some horrors in prison, so he decided that he was going to leave...

This is the weird part, though. Typically, we hear stories about people escaping from prison using a tunnel in the ground or a spoon to pry the bars of a window open, but not Payet. He had a better way to make a statement.

He escaped the prison via a helicopter that his buddies had hijacked.

I mean, they're pretty loyal friends to be helping him to break out of prison, right? The details of the actual breakout are pretty scarce, but I'm sure it went something like gracefully leaping into the air and into the getaway vehicle.

And guess what? The story doesn't end there.

Payet clearly wasn't happy living as a free man, because he decided that he would take the helicopter back to the prison and bust out his besties that were still trapped in there.

I mean, if it worked once, it'll work again, right? Wrong.

He was captured and given an extra seven years on top of his original sentence, but, rather than just keeping him in the prison, he was moved up to an isolation ward with high levels of security.

But Payet is a man who doesn't give up.

Yet again, his buddies were back with another helicopter (that they probably stole) and they busted him out via a rooftop passage. This time, he got away with it, flying into the sunset with his buddies. As illegal as it is, you have to praise his resilience.

There are so many stories similar to Payet's...

But I can safely say that I've never heard anything like the one I'm about to tell you about.

A gang leader tried to break out of prison disguised as his daughter.

This is Clauvino da Silva, a Brazilian criminal who came up with a bizarre plan that only ended up making himself a laughing stock all over the internet.

He was originally arrested for drug trafficking offenses.

He was supposed to be serving a seventy-three-year sentence for his involvement with the notorious "Red Command" gang in Brazil.

However, the forty-two-year-old decided that he had had enough.

He attempted to pass through security as his nineteen-year-old daughter, sporting a pink T-shirt and blue jeans.

It only gets worse...

He was also wearing a wig and a second-skin mask over his face to make the disguise look more "realistic."

And he would have gotten away with it if he hadn't started acting suspiciously.

The prison guards knew that something was up when the criminal, dressed as a teenage girl, started acting weirdly after they asked for "her" ID card from the high-security wing of the prison.

And, if being caught wasn't humiliating enough...

When he was caught, security demanded that he take off each item of his disguise in a bizarre stripping session, so that it could be given into evidence. The video exposes the lengths that he went to in order to fool everyone.

Keep scrolling to see the full-length video of the awkward ordeal...

That's what you get for trying to cheat your way through the system, I guess. You become a viral laughing stock.

Twitter only had one question though: "Where did the daughter go?"

She was actually left in her father's place. That's right, he left his nineteen-year-old daughter in a high-security male prison.

Have a look for yourself...

The criminal didn't get any extra time added to his sentence, because there was no violence involved in his plan. Instead, he was detained and put back into the high-security prison.

However, as the world talked about the video, things took a shocking turn for the worst.

A few hours ago, it was announced that Clauvino da Silva was found dead in his cell.

Rio de Janeiro’s prison authority confirmed that it was suicide.

Officials have decided to launch an investigation into the sudden death. There are a lot of factors to consider, including why he was trying to escape in the first place and if the cause behind his death was actually a suicide, or if it was just a cover-up for something more sinister.

So, what started off as fun and games has now resulted in yet another death.

It doesn't take away from the crimes that he has committed, but Silva must have been pretty desperate to get out of there. It raises questions about the conditions of Brazil's prisons and the growing issue of gang warfare throughout the entire country. Did you hear about the guy that supposedly escaped from Alcatraz and sent a letter to the FBI after fifty years of freedom? Keep reading for more on that story.