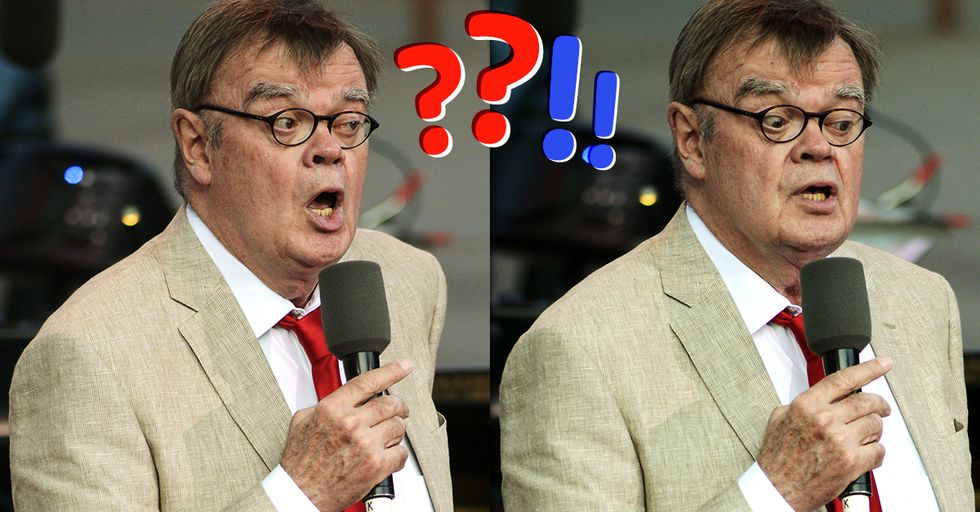 Matt Lauer's not the only man getting fired for sexual misconduct today.

Garrison Keillor, creator and former host of A Prairie Home Companion, announced this morning that he has been fired by Minnesota Public Radio after the network learned of allegations of Keillor's sexual misconduct.

Here's what we know so far:

The news broke this morning:

At first, the only information was that Keillor has been accused of "inappropriate behavior." But as we've learned over the past few months, that could refer to a wide range of actions.

Keillor himself stated that he'd been fired.

This is a surprising departure from what has become the norm in cases of allegations like these. In the past, we've seen men facing these accusations either vehemently deny the claims (which doesn't typically go well for them), or, in the case of comedian Louis C.K., directly address and apologize for them. Keillor didn't do either of those things. In fact, it seemed like he was the one breaking the news.

After confirming the news in an email sent to the Associated Press, Keillor followed up with a somewhat inscrutable follow-up statement about the reasons for his firing.

According to Keillor, he was fired because of “a story that I think is more interesting and more complicated than the version MPR heard." He did not elaborate in the follow-up statement.

The full statement from @MPR on Garrison Keillor: "MPR takes these allegations seriously and we are committed to ma… https://t.co/uId9aCt0Kp
— MPR News (@MPR News)1511978333.0

As a result of MPR severing ties with Keillor, they will "end distribution and broadcast of The Writer's Almanac and rebroadcasts of The Best of A Prairie Home Companion hosted by Garrison Keillor." They will also change the name of the weekly music and variety program (which has been hosted by Chris Thile since Keillor's retirement last year).

Apparently, Keillor had been the focus of an investigation for several weeks leading up to his firing.

Sources tell 5 Eyewitness News Keillor had been the focus of an internal investigation about his conduct for severa… https://t.co/oSaExhoC7y
— Tom Hauser (@Tom Hauser)1511977173.0

The "inappropriate behavior" in question reportedly occurred while he was responsible for the production of A Prarie Home Companion. Based on what MPR's attorney currently knows, there are no similar allegations against Keillor. This morning, Keillor sent an additional email to Minnesota's largest paper, the Star Tribune. In it, he gave some additional details of the actual incident which he believes led to his firing...

Keillor claims that he accidentally patted a woman's bare back when trying to comfort her.

Garrison Keillor addresses firing and adds if he had a dollar for every woman 'who asked to take a selfie with me a… https://t.co/9YdRIUkjea
— Richard Horgan (@Richard Horgan)1511979988.0

"Her shirt was open and my hand went up it about six inches," he said in his email to the Star Tribune. "She recoiled. I apologized. I sent her an email of apology later and she replied that she had forgiven me and not to think about it. We were friends. We continued to be friendly right up until her lawyer called." Keillor went on to say, "If I had a dollar for every woman who asked to take a selfie with me and who slipped an arm around me and let it drift down below the beltline, I’d have at least a hundred dollars. So this is poetic irony of a high order. But I’m just fine. I had a good long run and am grateful for it and for everything else."

Speaking of poetic irony, Keillor's firing occurred literally one day after he wrote an essay in defense of Al Franken.

In case you somehow missed it, Minnesota Senator Al Franken was accused of sexual assault by Leann Tweeden, who claims Franken forcibly kissed and groped her. Not exactly the kind of guy you should be defending.

Misguided defense of Al Franken aside, people are quite shaken by Keillor's abrupt departure from the world of radio.

(Not too shocked to make some great puns, though.) We're personally big fans of "Scary Home Companion."

Pretty much everyone is making this joke:

In case you're not familiar with Keillor's work, A Prairie Home Companion takes place in the fictional town of Lake Wobegone. Who knew the town name he completely made up would be used to announce his own failings? (Another example of poetic irony, perhaps?)

The news of Keillor's firing comes hot on the heels of this morning's news about Matt Lauer.

This Twitter user seems to think an entertainment industry with "only females" would be a bad thing. If you ask us, though, there are way fewer of these types of allegations coming out against women, so maybe it wouldn't hurt to give it a try.