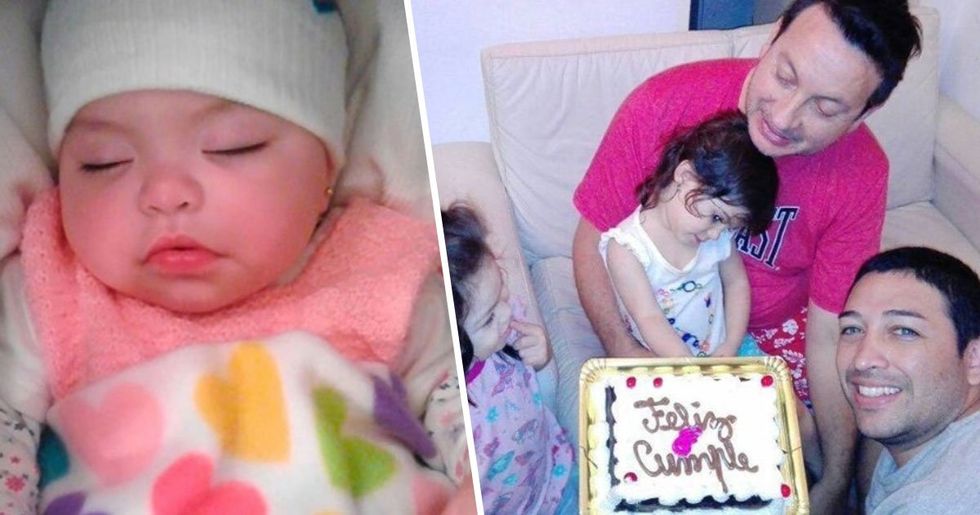 Science, research, and medicine have come on leaps and bounds over the years when it comes to treating HIV and AIDS.

When the viruses were first identified in the 1980s, they were pretty much a death sentence for whoever was infected. But today, in 2019, people who are HIV-positive can now live long and happy lives with the virus being pretty much undetectable.

But people infected sadly still carry a stigma, and this includes children who are born with the virus.

A gay couple from Argentina adopted a HIV-positive child after she was rejected by ten families because of her unfortunate condition. Keep scrolling to learn more...

HIV was first discovered in the 1980s.

The Human Immunodeficiency Virus is a virus that attacks the immune system and research found that it was the hunting and consumption of African monkeys such as chimpanzees that developed and spread the virus in humans.

The virus began in Africa...

Studies found that HIV originated in 1920 in Kinshasa in the Democratic Republic of Congo, which is the same area that is known for having the most genetic diversity of HIV strains in the world.

And this is when the HIV epidemic began.

HIV became a stigma in the gay community.

Gay men who had unprotected sex were the most common people to contract the virus, as the virus was spread very easily this way. However, scientists in 1982 discovered that HIV was also being spread through the use of needles when using drugs, and also through blood transfusions in hospitals.

There were very limited treatments for the virus, which went on to be named AIDS.

People infected would be given a mere few months to live after diagnosis and it was accepted that nothing could be done for those with HIV and AIDS.

The stigma of HIV in the early years was unimaginable.

Public response was negative in the early years of the epidemic and people in the gay community were stereotyped with carrying the virus and were shunned away from society.

Babies were born already infected with the virus...

Pregnant mothers who were HIV-positive were at a huge risk of passing the infection onto their unborn children; some mothers even passed it to their children through breastfeeding.

Modern medicine has made the virus something that you live with and it largely remains undetectable.

In 2017, statistics found that 38,739 people received an HIV diagnosis in the U.S. and 6 dependent areas. The virus is now treated with medication that prevents it from replicating in the body and allows the immune system to repair itself - meaning infected individuals can go on to live long and healthy lives.

People who have the virus can even live without passing it on to others.

And more and more are attempting to break the stigma that still surrounds the illness, such as Johnathan Van Ness, who recently opened up about being HIV-positive.

But this stigma still exists.

And innocent children are the ones who are being neglected and abandoned because of the illness they cannot control.

Despite modern medicine, some babies still contract the virus.

Here in America, around 6,000-7,000 women who are HIV-positive give birth annually, and twenty-five-percent of these women will transmit the virus to their unborn babies if they do not seek the appropriate treatment.

The number of children born with HIV is staggering...

At the end of 2015, 2.6 million children around the world aged fifteen and younger were living with the virus.

But not all of these children are welcomed into loving homes...

Particularly in countries wherein the virus is highly stigmatized and frowned upon, such as Argentina.

But one gay couple from Argentina does not perceive the virus this way.

Damian Pighin, forty-two, and Ariel Vijarra, thirty-nine, were actually the first gay couple to get married in the north-eastern Argentine province of Santa Fe.

The couple wanted to extend their family...

So they decided to adopt a baby. They came across a newborn baby girl in 2014 who was struggling to find a home after ten families had rejected her - because she was HIV-positive.

She was very underweight when she was born...

The little girl had been named Olivia, and she immediately started to gain weight after being given appropriate HIV medication.

The couple didn't hesitate to accept Olivia into their family.

Speaking to local media, Ariel said: "As soon as I saw her, I felt that she was part of my life. The connection was immediate. We held her in our arms, gave her the bottle and she looked at us with her eyes wide open without crying."

The family received the wonderful news a few years ago that the virus is no longer detectable in Olivia.

The family grew by one more in 2015 when another little girl, Victoria, who was of similar age to Olivia, was adopted.

The couple are passionate about giving unwanted babies loving homes...

Research to find the cure for HIV is still ongoing...

Despite the virus being heavily controlled, it isn't completely curable and scientists and researchers continue to work hard towards a cure that will get rid of the virus altogether.