Gay Couple Have Their Engagement Shoot at Target | 22 Words 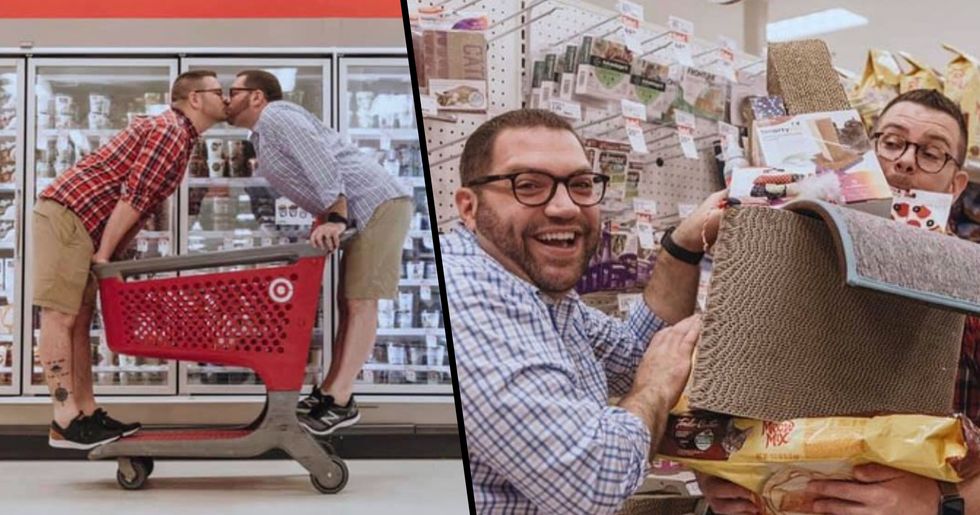 Gay Couple Have Their Engagement Shoot at Target

I don't know what it is about people getting their engagement snaps in food stores and other places of commerce, but I just can't get enough.

I'm not even a big fan of weddings, or marriage, or commitment in any sense, really. That being said, nothing melts my heart more than seeing a couple celebrating their love in the aisles of a familiar store.

Shops are for lovers, that's why I shop online.

Continue scrolling to see the adorable shots of soon-to-be-wed Aaron and Tony in Target.

And if that wasn't enough, we've included the cutest shots of Jess and Brandon celebrating their upcoming wedding in Costco.

You are very, very welcome.

But the loved-up couple says that they have many memories of perusing the aisles together.

Aaron and Tony wanted their engagement shoot to be personal.

Aaron explained the importance of Target to the couple during an interview with Inside Edition, he said: "We always gravitated to Target and would just go to cruise the aisles while sipping on an iced coffee. We associate Target with a lot of our first and best memories together. We just always feel at home."

Even going shopping can feel magic when you're in love.

You don't need to be in some fancy restaurant or jet setting somewhere tropical when you're truly in love you can make amazing memories arguing over which kitchenware you should get.

Target's got everything you need for an engagement shoot.

Aaron and Tony knew what they were doing when they chose Target.

"Remember when we bought our first pizza in Target?"

"We both said pepperoni at the same time."

"Who is the fairest husband of them all?"

"You can go in the trolley next time."

The photographer got really creative with what was in store.

Photographer, Erica Whiting shot all of Aaron and Tony's engagement shoot. She really managed to capture the couple's humor and sweet nature.

There's nothing better than cute Target gifts from your beloved, right?

The only problem with going into Target...

You always end up leaving with way more than you expected to.

Now, who's planning a date to their nearest Target?

After seeing Aaron and Tony's sweet snaps do you really need any more convincing that this is the place long-lasting love is born?

There's also a lot of love to be found down the aisles of Costco...

It's impossible to leave a Costco without a cart full of random objects that you most definitely did not go in for in the first place. Sometimes, love also blooms.

Costco is a place of endless possibilities.

Need gallons of milk? Costco's got it. A lifetime supply of peanuts? Costco. Oh, you need a husband? That's right... Costco could have one waiting for you.

Yep, one woman left with more than just a bargain...

Jess Ayala Brown, from Honolulu, Hawaii, was shopping in Waipahu's Costco branch with her roommate when she miraculously met her future husband-to-be, Brandon Brown. I know what you're thinking... When will this happen to us?!

The pair met in the mac 'n' cheese aisle.

To make this story even better, they met in the best aisle in Costco. What are the chances?

Jess was debating whether or not to buy boxes of mac 'n' cheese...

Though this is a bit of a silly question... Who ever needs to question buying mac 'n' cheese?

Brandon overheard her discussing her dilemma, and said: "It's good for you. It's cheese — and it's Costco." This made her laugh, and they subsequently exchanged numbers.

Not bad for a Costco find. Though their timely meeting is the butt of many jokes, with Jess telling INSIDER: "I've literally spent the last two years responding to any compliment about Brandon with 'Thanks, I got him at Costco.'"

The following year, they got engaged.

Beautiful photos on Jess' Facebook page show Brandon's beach-front proposal, complete with a bottle of wine which read, "Jess, will you marry me?" Whether it was wine from Costco remains undetermined...

They then tied the knot in a gorgeous ceremony.

The couple got married in May in a beach-side ceremony in Honolulu and celebrated with a lavish evening reception with their family and friends.

But the part that you're all here for...

Is the Costco photoshoot, of course! I know what you're thinking, these beach pictures aren't quite Costco material, are they?

They returned to Costco a month after the wedding.

Because you'd have to be completely insane to actually get married in a supermarket, right?

They returned to where it all began...

"The ongoing joke in our relationship had been that if he acted up, I would take him back to Costco," Jessica said. "He would joke and say I didn't have a receipt, but we all know Costco has the best return policy." However, instead of returning him, Jessica was going back to the supermarket as his wife.

They returned to the aisle wherein they had met.

And stocked up on plenty of mac 'n' cheese, of course.

Because mac 'n' cheese was the building block of their relationship.

The photographer, Lisa Rose, instructed Brandon to "hit on her the way you did that day," which clearly wasn't a problem.

The photoshoot was surprisingly beautiful.

The pair look so happy, it's actually easy to forget about the not-so-beautiful location.

They even dined in the famous Costco food court...

And ate pizza. So romantic.

Costco quickly got wind of the couple's photoshoot.

And the post instantly went viral, raking in over 20,000 likes and shares from people (mainly Costco fans...) all over the world.

Nothing wrong with a good ol' Costco hotdog, people!

One woman even had a confession...

It turns out that the Browns aren't the only couple to spend a part of their wedding in the superstore...

Meeting the love of your life in Costco could be a thing...

Several other people commented, sharing their own stories about how they found romance in the vast aisles of Costco. One social media user wrote: "Omg, I met my boyfriend at Costco about 6 and a half years ago. He was and still works in Tire Sales. I'm a lucky woman!," while another wrote, "I met my husband at Iwilei Costco, thirteen years ago. Still my favorite store."

Costco is obviously the place for true love!

When asked for her thoughts on becoming a viral sensation, Jess said: "In regards to going viral, we had no idea it would gain such popularity." "We really did it to commemorate our relationship and how we met. We're a very playful couple, I think it contributes to the success of our relationship. He's literally my best friend and we're always up to some shenanigans." Be right back, just going to hang out at my local Costco...