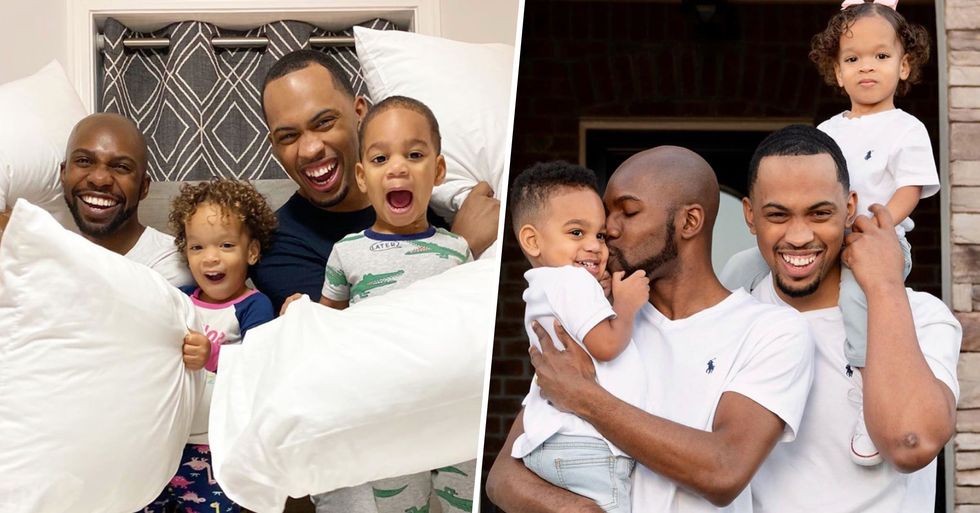 This story is truly incredible!

We live in a world where some wonderful things can happen.

Most of it thanks to mother nature.

That blesses us with the births of thousands of babies every year.

And fortunately in today's day in age, pretty much anybody can have a baby.

Thanks to the technological advances in IVF, couples who can't conceive naturally, and who would once have had to admit defeat, can now have families of their own.

There is now an array of different conception methods for struggling couples...

But by far the most talked-about is surrogacy.

Now, what exactly is surrogacy?

Surrogacy is an agreement wherein a woman agrees to carry and birth a baby for another person or couple.

A couples' fertilized embryos are implanted into the surrogate...

And, from there, the baby will grow and be born from this other woman, rather than its biological mother.

Obviously, agreeing to become a surrogate for someone is a huge commitment...

A surrogate will have to put her body through the journey of pregnancy (and the trauma of labor, of course) for someone else's happiness and fulfillment... So, it isn't a decision to be taken lightly.

Most couples choose someone they know to be a surrogate...

Or they will select a volunteer, who will be paid a generous amount for their commitment.

Terrell and Jauris Joseph, both 27, are the latest couple to share their story of surrogacy.

The family now document their lives with their three-year-old son and daughter on social media.

Terrell and Jauris began their process of surrogacy in their early 20's as they desperately wanted to be parents.

They began working with a surrogate but noticed that she was struggling to conceive.

They moved on to another surrogate but were met with a surprise at the very last moment.

Not only did the second surrogate conceive, but the first surrogate did as well on a very last attempt.

The couple spoke to Good Morning America where they explained that they were both 22 working full-time corporate jobs having just brought a house when they decided that they were ready to start a family.

For Terrell the want for children had already started years before when he as young as 19. He had been looking into adoption and surrogacy from his college dorm room.

He explained, "I grew up around a ton of kids, I was a godfather and I knew no matter what I wanted to be a parent."

When they started the process the couple realised that most adoption agencies wouldn't work with them due to their age and as for surrogacy agencies, they charged thousands.

So instead, they looked for a surrogate independently.

They then found another ideal surrogate but she was struggling to get pregnant.

So whilst on their last attempt with her, they also moved onto their third surrogate.

As on the last try, they had already assumed that it wouldn't work as the other tries hadn't.

So as you can imagine, the couple was shocked to find out that both surrogates two and three had both fallen pregnant.

"Everything was like times two. And I was like, 'I'm so terrified ... I want to be a dad, but like, I can't do two at once,'" Jarius said. Terrel, on the other hand, was not terrified, he was thrilled, he explained: "I was over the moon because I always wanted twins and this was the next closest thing."

Months later and their two babies were both born, arriving prematurely.

Ashton was the first baby, coming a month early at 3 pounds, 11 ounces and then followed Aria, 4 weeks early.

The fathers no longer work corporate jobs, quitting them, and turning to content creation and ultimately, fatherhood.

They now share their lives online with their thousands of followers.

They even stared on Wife Swap in 2019 making them the first gay Black couple on the show.

But for Jarius and Terrell it's not the undeniable success that makes them share their lives...

One of the most important things to them is to show the family life of gay parents.

Jarius explained, "I feel like there are so many people in our community who still to this day don't see the life that they would like to have being actually a possibility."

"Don't think that just because you're part of the LGBTQ+ community that you can't have certain things in life or that success won't come your way."

Terrell said "With fatherhood in general and Black fatherhood, I know that historically, [the stereotype is dads] aren't involved. We can be active in our kids' lives and give them everything that they dream of, or at least try to."

"Being same-sex parents ... we're not raising our kids to be in a sexual identity or to think a specific type of way other than being open-minded. Breaking all of those stereotypes ... bit by bit, I think, has always been our goal,"

Surrogacy is a truly remarkable phenomenon - but it doesn't always go to plan. Keep scrolling to read about the fertility clinic who accidentally implanted a woman with the wrong embryos...