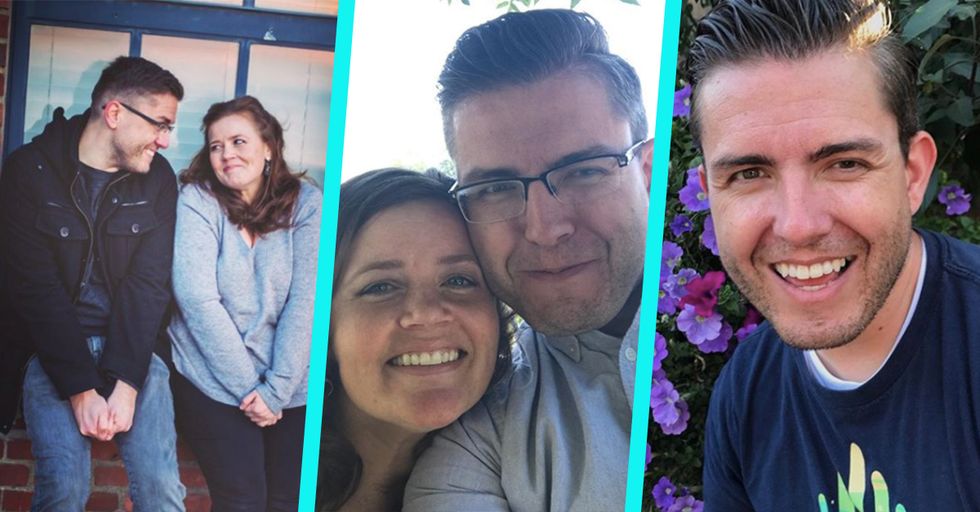 Josh Weed made headlines in 2012 when he publicly announced his homosexuality on the 10th anniversary of his marriage to straight wife, Lolly, who apparently knew Josh's true sexual orientation before they were married.

After 15 years of marriage, 6 of which Josh and Lolly lived publicly as a mixed-orientation Morman couple, the couple is once again making headlines with an announcement; only this time, the couple is announcing their decision to divorce.

In 2012, Josh and Lolly Weed made headlines when the married Morman couple announced in a blog post that Josh is gay and that his wife Lolly had known about Josh's homosexuality since before the couple married ten years prior. Josh writes:

I guess the premise of this post is to share that not only am I homosexual, but I’m also a devout and believing Mormon. And that I’m very happily married to a woman, and have been for ten years now.

Josh claimed that his decision to live as a gay man in a straight marriage was based on his dedication to his Morman Faith.

I chose not to 'live the gay lifestyle,' as it were, because I found that what I would have to give up to do so wasn’t worth the sacrifice for me.

Josh references the ability to have a romantic relationship and a family that is in alignment with his faith as primary motivations for his decision.
The 2012 viral blog post, "CLUB UNICORN: IN WHICH I COME OUT OF THE CLOSET ON OUR TEN YEAR ANNIVERSARY," defended the couple's mixed-orientation marriage.

I am attracted sexually to men. Period. Yet my marriage is wonderful, and Lolly and I have an extremely healthy and robust sex life.

"Thou Dost Protest Too Much"

"It works well, for us," Josh Weed was quoted saying in a Nightline Interview, following Josh's public coming out announcement on his blog, "The Weed," in 2012. Lolly also claimed to have "no regrets" about her decision to marry a gay man.

I wanted to marry Josh Weed because I loved the man that he was. I loved everything that made him him. I didn’t want anyone else. I knew that we had the kind of relationship that could work through hard trials and circumstances. I had faith in him and I had faith in our love.

I wish we could sit down with each person who sees this and explain why Lolly and I are getting divorced. Since we… https://t.co/ZsgL3guAJX
— Josh Weed (@Josh Weed)1516916314.0

6 years later, the couple is now publicly announcing their divorce. In yet another blog post announcement, the couple addresses the reasons behind their decision and apologizes for any unintentional harm they may have caused the Mormon LGBT community.

The Sad Reality of the Couple's Marriage is Revealed

In the recent post announcing the couple's decision to divorce, Josh admits that the marriage "contained an undercurrent of pain that [they] were not able to see clearly or acknowledge for many years, which made continuing in it impossible." Josh goes on to explain that it was his love for the LGBT community and newfound love for himself as a gay man, along with the death of his mother, that led to his decision to end his marriage of fifteen years.

Lolly Weed is coming clean about the pain she experienced during her 15-year marriage to Josh Weed.

Giving my whole heart to Josh while knowing that he did not love me the way a man loves a woman has always been devastating. We were best friends, but he never desired me, he never adored me, he never longed for me.

In closing, Lolly finally acknowledges a fundamental truth, one that the LGBT community has expressed since the couple's coming out in 2012.

Platonic love is simply not enough, no matter how much we hoped it was. God designed us to need and want romantic attachment.

In the recent post, Josh apologizes to the LGBT for any harm he unintentionally may have caused.

After apologizing to the entire LGBT community, Josh acknowledges one last realization:

I am no different than you, and any degree to which I held on to the idea that I could be gay without being gay was, I see now, a manifestation of lingering internalized homophobia born of decades of being told this part of me was evil. It was an effort to belong to the “in-group" (heterosexual members of the Mormon Church) that I was actually not a part of.

While the couple announced their divorce as recently as Saturday, Josh has already updated his Twitter Bio to include his newly single status.

I'm a writer and a therapist. I'm also that gay guy you saw on @Nightline and @vh1who’s happily married to a woman. (See latest tweet to read abt our divorce.)

Despite some arguably misguided choices, Josh and Lolly Weed are just people; they are parents who have four inspiring reasons to search out their personal truths and find authentic happiness. Moving forward, Josh hopes to focus on his faith, family, children, and love. He writes, "We can continue to be the family we have always been, and we can add to that family."