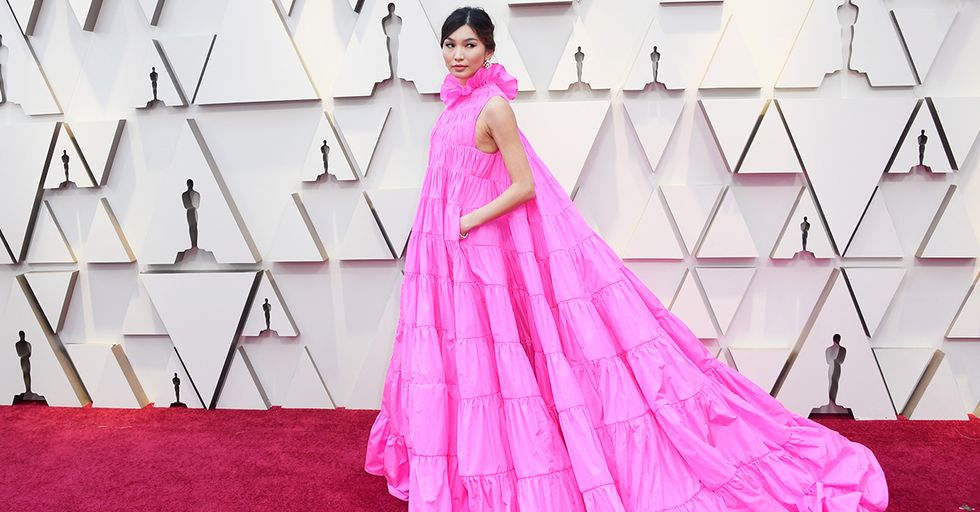 We here at 22 Words have just the tiniest crush on like the entire cast of Crazy Rich Asians, so we were glued to our televisions on Sunday during the Oscars keeping our eyes peeled for any new fun shenanigans or even better, hints on Crazy Rich Asians 2. And while we didn't hear anything in the way of a sequel, we did get some of the former.

Gemma Chan, star and complete boss of this summer's biggest (in our hearts) movie Crazy Rich Asians brought a little something extra to the ceremony, because apparently "they don't serve dinner," which is insane for an award show that goes from like 4 pm until 9 pm. And with hair and makeup and everything, you're not eating before lunch. So, you know, like a friggin genius, she came up with a plan weeks, if not months in advance. And now it's about to be the biggest Oscar dress trend of 2020.

Gemma Chan is a national treasure. Or, you know, a British one at least.

And after her insanely huge movie, Crazy Rich Asians killed it at the box office this year, her and the rest of her cast were invited to the Oscars.

Gemma Chan knows how to put together an outfit.

But to be fair, the entire cast of Crazy Rich Asians looks pretty darn good in formal wear.

I want to watch this scene again just because of how much better looking everyone is than me.

Come on. It's not fair. This was like the sexiest cast of 2018. Other than maybe the Avengers, but you know, that's cheating.

But at the Oscars, Gemma Chan was hiding something.

And that something? Hidden pockets. A true genius move, and any girl's dream. Seriously, did she sew those pockets in herself or can we just order dresses with pockets in them now?

Check out her hidden stash she revealed after the ceremony.

Where can I get clothes like this to just wear around all day every day?

Good on her for going for the rice crackers and not the cookies, because I would not have that kind of self-control with the amount of champaign floating around that building.

It seems kinda messed up that they don't at least hand out a snack or two.

It's a long ceremony and the red carpet starts around 4 pm in Los Angeles.

And they totally do provide meals at the Golden Globes.

And hey, now we know why Patton Oswalt took his Emmy to Arbys.

That looks... even sadder than the joke intends for it to be.

Okay, but back to Gemma.

We almost forgot who we were obsessing over... but we're back!

If you didn't know that before tonight, you're a bad person or you've never taken a date to a formal occasion.

Some people were confused...

Chips Ahoy got in on it too.

It's true, we are a news organization now, and this is v important.

Except, you know, there's a 99% chance they wrote their joke first, because it's kinda obvious.

How? How is the internet so good at finding the perfect GIF for everything?

Plus there was a distinct lack of Tom Hiddleston in the Avengers last year, so we have to get our fix in somewhere.

She deserves an award.

@etnow Give this peak woman every award in life for this move, everyone can feel the same to their core
— Richard Chen (@Richard Chen)1551125622.0

Can we get a new category? Best Red Carpet Wardrobe Innovation? That's better than like half the other categories anyway.

This... this is the next level.

Who came up with this and where can I get one so I too can eat snacks like a spy?

But it's fine, we'll be back next year for more red carpet puns.

And you know what? Just because we like you so much, we're gonna do a quick rundown on the Crazy Rich Asians cast on the red carpet.

Because why the hell not? What else do we have going on today?

And she decided to wear yellow because of Jon Chu's choice to end Crazy Rich Asians with that great cover of Coldplay's Yellow.

Henry Golding went with the white vest and it's low key inspiring.

Like serious, when's my next black tie event? Never? Because I'm not important enough? Gotcha.

Awkwafina rocked this bad-ass suit because she's cooler than all of us.

And she got to present with John Mulaney, so you know, goals.

And Michelle Yeoh looked like the freaking Fairy Godmother.

Or like Glinda from The Wizard of Oz. Either way, perfection.

So what was your Favorite part of the Oscars?

Mine was Olivia Coleman's speech, because I'm obsessed with her, or the red carpet, because obviously.

But in all honesty, I think we all know what's on everyone's minds.

I'm not going to say it out loud because Bradley is married, but...you know.