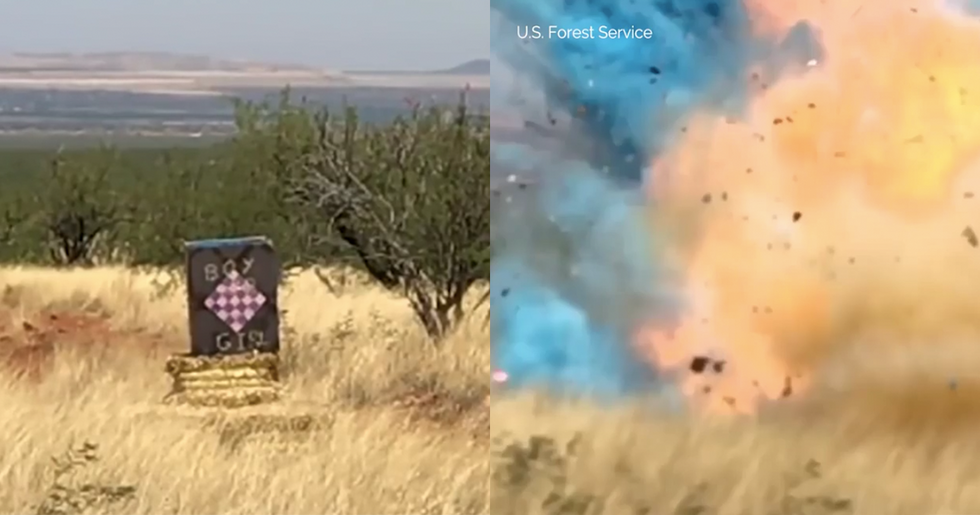 A year and a half ago, one simple gender reveal party took the surprise too far. The U.S. Forest Service has just released video of the event that caused a devastating wildfire in Arizona. And this is definitely the most unorthodox fire-starting event we've seen.

The Arizona Sawmill Fire began with a bang, and from there, it spread across thousands of acres—costing millions of dollars to put out. Furthermore, now that the footage has been revealed, and the fire-starter sentenced, we've got the whole story for you. This event spurred on a change in regulations on explosives– and it wasn't the only time an explosion like this went wrong.

So check out this bizarre case of baby shower meets wildfire!

The Arizona Sawmill fire was the result of a gender reveal party gone horribly wrong after a target exploded in the middle of yellow grassland in the Santa Rita Mountain foothills.

Ideally, the only explosion would have been a cloud of color.

The whole thing was supposed to be a dramatic reveal—blue powder for a boy, or pink for a girl.

But that’s not what happened.

When an explosive target is shot with a high-velocity firearm, the results don’t always go off without a hitch.

You can see blue smoke around the fire’s edge.

Take a look at this video, taken by a witness as the fire started. The blue “It’s a boy!" smoke clears fast, and fire soon follows.

This past September, a Border Patrol agent pleaded guilty to starting the fire.

Dennis Dickey had been charged with causing a fire without a permit, after shooting the target intended to reveal the gender of his and his wife’s expected baby.

The video was obtained by the Arizona Daily Star.

The publication obtained this video through the Freedom of Information Act. The U.S. Forest Service, which had led the investigation into the fire, did black out people in the video for privacy.

The fire required 800 firefighters to put it out.

It burned across burned 47,000 acres and necessitated the evacuation of over 100 people. The overall damage it caused cost the state $8.2 million.

You have to wonder why this party seemed like a good idea.

The target that was demolished contained an explosive substance called Tannerite. This substance has also been linked with other wildfires in the west.

There was even an active fire watch.

That’s right: the target was filled with explosives and placed in a dry yellow grass field while winds blew at around 40 miles an hour. Due to those conditions, the National Weather Service had issued a fire watch.

Thankfully, nobody was hurt.

Though the fire was large and damaging, it caused no injuries and burned no buildings. That’s good, as far as wildfires go.

And the fire was immediately reported.

“Dickey immediately reported the fire to law enforcement, cooperated and admitted that he started the fire. Dickey did not have a permit allowing him to cause timber, trees, slash, brush or grass to burn," reported an affidavit that was filed in federal court.

He attempted to extinguish the blaze, but it spread too quickly.

According to Dickey’s attorney, Sean Chapman, he ran over to put out the fire immediately, but “within seconds it was 30 feet wide."

The blaze burned up land belonging to three state and federal agencies.

Beginning on April 23, and lasting for over a week, the Sawmill Fire was eventually investigated by the U.S. Attorney’s office because it damaged federal land.

It started on state-owned land near Madera Canyon.

From there, the fire blew northeast across the Santa Rita foothills, into Bureau of Land Management lands and sections of the Empire Ranch. Luckily, all of the ranch’s historic buildings were spared.

Dickey will be paying off debts for a long time.

He was also sentenced to a 5-year probation.

So, let this be a warning to all who feel an inclination to detonate things in fields during perfect fire-starting weather. Think the plan through a little bit before putting it into action.

Plus, there’s a bit of public service tossed in.

He’s also got to participate in a public service announcement alongside the U.S. Forest Service, talking about the cause of the fire.

Fortunately for Dickey, he can’t be charged with arson.

Because the fire was accidental, and not willful, arson charges can’t be brought against him. Starting a fire without a permit is officially a petty offense—though in this case, it came with serious consequences.

The sentence also leaves Dickey with his job.

Because it was only a petty offense, it’s likely he’ll keep his position as a Border Patrol agent.

Dickey made it clear that he didn’t expect his gender reveal party to spiral out of hand.

“It was a complete accident," Dickey said while in court, according to Tuscon.com. “I feel absolutely horrible about it. It was probably one of the worst days of my life."

Technically, he was on the hook for all $82 million in restitution.

But, due to the plea agreement, the government isn’t going to seek any more from him beyond the $220,000. Unless, of course, Dickey suddenly comes into a lot more money.

It was agreed that ordering Dickey to pay the full $82 million wasn’t practical.

He already took money from his retirement fund to pay the $100,000 due at sentencing. Dickey’s attorney said that he could never come up with the full amount—it would be “like getting blood from a stone."

Tannerite is a legal compound.

However, after the fire, there was a push from the county to make the selling, possession, and use of any chemical or material that could be used as an exploding target.

As of September 2017, the ordinance was approved.

Although there are exceptions, the Pima County Board of Supervisors has implemented bans on the sale of explosive chemicals—with good reason.

There’s more than one reason behind the ban.

The Sawmill Fire was referenced in this ban, but there were other fires too. As it turns out, explosives are behind a number of incidents in that area alone.

Take the Molino Fire on Mount Lemmon, for instance:

That fire, which began earlier in the same month as the Sawmill, was started "by rifle target shooting when a ricochet bullet landed in a spot of tall grass," according to Coronado National Forest spokeswoman Heidi Schewel.

Another incident involved a local garage.

One Sheriff’s Department bomb technician, Sgt. Chris Rogers, recalled an accident in 2015. The garage was set on fire while explosive targets were being manufactured.

As such, Rogers was on board with the explosive restrictions.

“This is no different than prohibiting fireworks in Pima County, which we already do by ordinance," Rogers told Tuscon.com. “These items do cause fires, they do cause injury."

According to Rogers, the explosives present an “unreasonable fire risk."

Not only that, but there are other materials besides explosive targets can be used at indoor shooting ranges with no risk of starting fires.

And for sure, we don’t need any more unreasonable fire risks.

If nothing else, the intense wildfires this year alone are a reminder of that.  Share this gender-reveal fiasco with your friends!