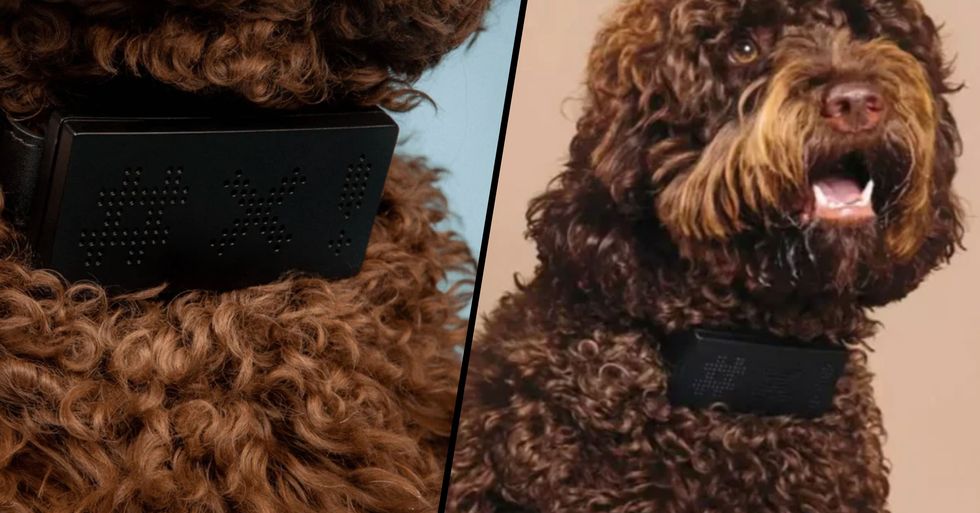 Ladies and gentlemen, it's finally happened - Dogs now have the ability to speak.

A new collar has been invented which can translate your dog's barks into swear words. It's one step in the right direction, I suppose...

Keep scrolling for the full story, and to find out where you can get one of the potty-mouthed gadgets for your own pooch.

We've all wondered what our dogs would say if they could talk to us.

Would they declare their undying love for us? Would they thank us for consistently providing a warm and loving home for them? Or would they just ask us for more food?

Sadly, we may never find out.

Because, despite their intelligence, dogs simply do not possess the biology to speak in languages as we do.

Dogs have derived their own unique ways of communicating with us.

Whether it be rolling over for a belly rub...

Or barking incessantly until they get what they want, dogs have acquired their own quirky ways of communicating with their human companions over the years.

We feel like we know our four-legged companions well enough to guess what they want from us.

But, out of all the things we think our pooches are trying to tell us...

There are some things that we like to think they are not trying to say.

And they are curse words.

Surely, our dogs are too pure and innocent to want to swear at us?

But I think that my dog loves me way too much to ever want to aim such foul language in my direction... I think.

But let's be real with ourselves...

Dogs must go through a lot of frustration with us humans sometimes.

Especially those who have been subjected to the cone of shame.

If you've ever forced your dog into the cone... I'm pretty sure it hates you.

And if you've ever brought a cat home...

Well, it's game over for you, my friend.

Anyway, someone has obviously been doing a lot of thinking about the daily frustrations our pets must go through...

And, as a result, they have come up with a nifty little device that can help our pooches relieve these stresses.

It does everything it says on the tin.

A collar, that allows your dog to cuss. What's not to love?

The collar, which is made from a high-quality patent leather...

Is bark activated, and has a number of different swear words loaded and ready to go whenever your pet makes a noise.

Okay, so it isn't your dog's own swear words exactly...

But it will still spew out a barrage of foul-mouthed insults whenever your pet barks... So it's just as good, right?

The collar is a little controversial, to say the least...

And the company's website, which has the tagline "Go Bark Yourself", warns customers that the collar is not suitable for training, stating: "This collar is NOT a shock/vibration/training collar and is not intended for anti-bark training use."

But hey, everyone deserves the right to freedom of speech...

Yet, despite the controversy...

The Cuss Collar has proven to be wildly popular as, at the time of writing, it has completely sold out. You can have a look for when the potty-mouthed collars are back in stock here.

And, if you're still not convinced...

Check out this video of it in action. What's not to love?! If reading this has got you in the mood for a bit of gadget shopping, keep scrolling to see some incredible inventions that are available to buy for under $25... You can thank me later.