13 Genius, Top Secret Starbucks Hacks That Will Save You Tons of Money | 22 Words 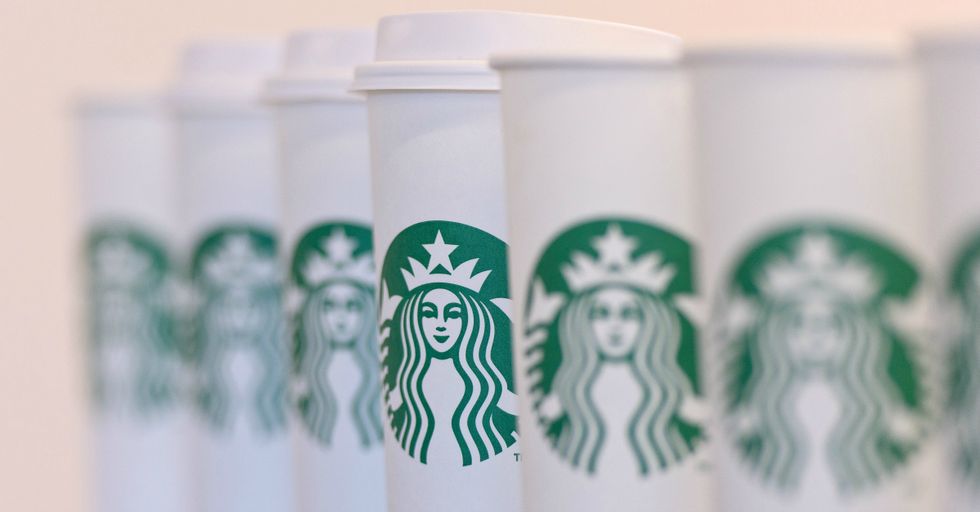 13 Genius, Top Secret Starbucks Hacks That Will Save You Tons of Money

Admit it: You're low-key addicted to Starbucks.

There's nothing wrong with that! But you also know that it can be a pretty expensive habit to maintain.

But it doesn't have to be that way!

Here are 13 hacks you can use to save money at Starbucks.

An iced latte, while totally delicious, is a very simple drink. It's made out of espresso shots and milk (over ice, obviously).
With that being said, you could ask for a triple shot of espresso over ice in a Venti cup...and then add your own milk. (And yes, they have it available at the condiment station, but it's much more classy if you can take your drink home or to work and add your own milk.)

If you're chilling at the 'Bucks (that's what the kids say, right?), you can get a refill for a mere 50 cents, as long as you ordered either hot or iced coffee, or hot or iced tea. 50 cents! What a deal!
Not only that, but at most stores, you can use your refill to get one of the other refill-able beverages. (So, you could order a hot coffee, then get an iced tea as your refill). If you enjoy a good chai latte, this next Starbucks hack is for you...

Instead of ordering a chai latte, try getting a hot chai tea and asking for them to add hot milk. (If you want it sweetened, you'll have to add that yourself, but this drink is still super cozy and tasty!)

4. Bring Your Own Cup

Not only is it the environmentally friendly thing to do, it will also save you 10 cents each time you do it. (Hey, we said we'd save you money, not that we'd save you a lot of money.)

Do you like the Pumpkin Spice Latte? Of course you do. Unfortunately, it's only available for a few weeks out of the year. Unless...
You can recreate the iced version by ordering a triple shot over ice with a side of chai and another side of white chocolate mocha. It's about $1 less than the actual drink and, of course, is available year-round.

First of all, if you've never had a dirty chai (chai latte + espresso), you are missing out. If you have had it and want to recreate the same taste for less, order a regular latte and ask for your barista to add chai syrup. It won't taste exactly the same, but with the money you're saving, you're probably not going to mind. This next hack is for a drink that's 100 percent free!

OK, it's only water, but stay tuned — there's another free drink coming up! The tap water at Starbucks is filtered, so rather than spending money on a water bottle, ask politely for a cup of ice water. (Note: Your best bet is to do this at a time the store isn't crazy busy!)

No, we're not shilling for Starbucks; their Rewards program just makes a lot of sense for people who go there often. You can get regular discounts, order ahead, and best of all...
...You get a free drink on your birthday! It's free to join, so you might as well, right?

9. Go with a French Press

If you're getting coffee with a friend (or are feeling particularly thirsty), you may want to order a French press coffee instead of two separate coffees. A French press holds a few cups of coffee, so you'll get more bang for your buck.

At most Starbucks stores, the iced teas in the pitcher are brewed at twice the concentration and then watered down. If you order it with no water, you'll get twice the flavor for the same price. Did you know there's a size smaller than "Tall"? Here's the info...

When ordering a cappuccino, consider getting a "Short" rather than a "Tall" — it's one size smaller (read: cheaper) but has the same amount of espresso.

Honestly, the best way to save money at Starbucks is by being kind to the people who work there. Having been a barista myself, I can tell you that I regularly gave nice people extra shots of espresso and other perks for no additional charge.
Being a barista is rough, you guys. It's a stressful job that only gets more stressful when customers walk in and start making outrageous demands. Just be nice. It'll probably get you free stuff, plus it's just a good thing to do in general. And now for the No. 1 money-saving Starbucks hack:

13. Make Your Own Dang Coffee

Obviously, if you make your own coffee at home, you're going to save way more money than you will using any of the hacks listed here. You can even get fancy syrups, milk frothers, and a steamer if you're feeling extra adventurous.
With all that being said, go forth and drink coffee! (And save money, too. It's a win-win.) Share these hacks with someone who can't get enough of the joe!