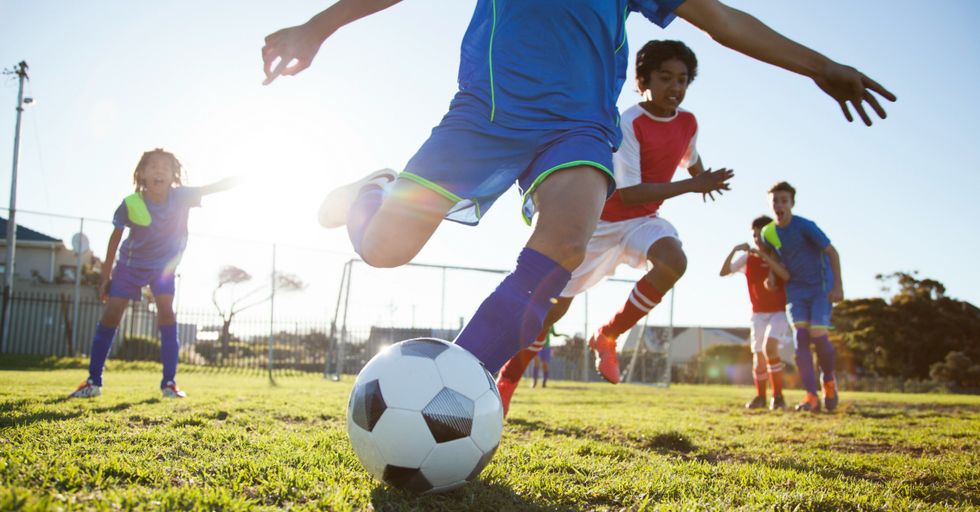 There's no realm quite as cutthroat as the world of children's sports.

And there's no more ruthless group of human beings than soccer moms.

When this woman accidentally found herself in the beast's lair a.k.a. a soccer mom group chat, she did the one thing you're not supposed to do: She poked the beast.

She was recently accidentally added to a group chat comprised of soccer parents, and instead of saying, "Hey, I think you have the wrong number," she ignited a soccer mom war. It's incredible.

"They are a bunch of parents and a coach for some kids soccer team. Instead of telling them they had the wrong number, I did this. I am a horrible person... I'm so sorry Coach Juan." Don't be sorry, Christi. Never be sorry for creating pure art. Let's break this conversation down screenshot by screenshot.

All these parents wanted to do was set a meeting with Coach Juan.

And everyone agreed. There was peace and a thumbs up emoji. Then, Christi Rantis Lally threw the first grenade.

"My kid is the best on the team...just sayin," she dared to write.

Needless to say, parents leaped onto her and being tearing her apart like angry tigers.

These parents were livid. You probably would be too if another mom tried to pick a fight in a group text. But this was far from over...

The audacity of the "mom" Lally impersonates is appalling... and a little bit impressive.

She just dared to say what everyone was already thinking. (Maybe it's because she doesn't actually have a kid on the team.) But of course your kid is the best on the soccer field. Way better than little Eddie Sticky Fingers who licks melted popsicle juice off his hands instead of defending his goal.

Lally wasn't done yet, though. She began full-on brag-lying, which is when you brag about things that definitely didn't happen.

The best part is that these parents had no inkling that the person boasting about spending Christmas with David Beckham wasn't being entirely truthful. Not to mention, she dissed the snacks.

She dissed the snacks, people!

"I don't know wtf is going on here but I'm getting pissed off," one parent wrote. For a not-soccer-mom, Lally is pretty skilled at knowing exactly what's going to set them off.

"What pissed you off?" she asked innocently. "The snack comment?" These soccer parents had had just about enough.

She poked the beast. The beast woke up pissed. She poked it again. It roared. But Lally kept poking.

Participation trophies are wack. Orange slices aren't good enough. This fake soccer mom had a lot to complain about. But that wasn't all...

And she was going to finish the fight she started.

We like to think that Lally was lounging by a pool, sipping a piña colada, wildly tapping away at her phone screen, infuriating an entire team's worth of soccer parents with false Cristiano Ronaldo stories.

This group text exchange is horrific, beautiful, and beyond our wildest dreams.

There was no posted conclusion, which means we can only assume that Lally never revealed herself as a troll and all the soccer parents have gathered somewhere wielding pitchforks, ready to hunt down their soccer mom enemy. Meanwhile, Coach Juan is wondering where all the parents are. He just wanted them to vote on a jersey color...

The only thing to do here is to hug it out.

In the rough-and-tumble world of children's sports, parents often take things too far. This is a good reminder that kids' sports should be about having fun. And snacks. Got to make sure the snacks are on point.