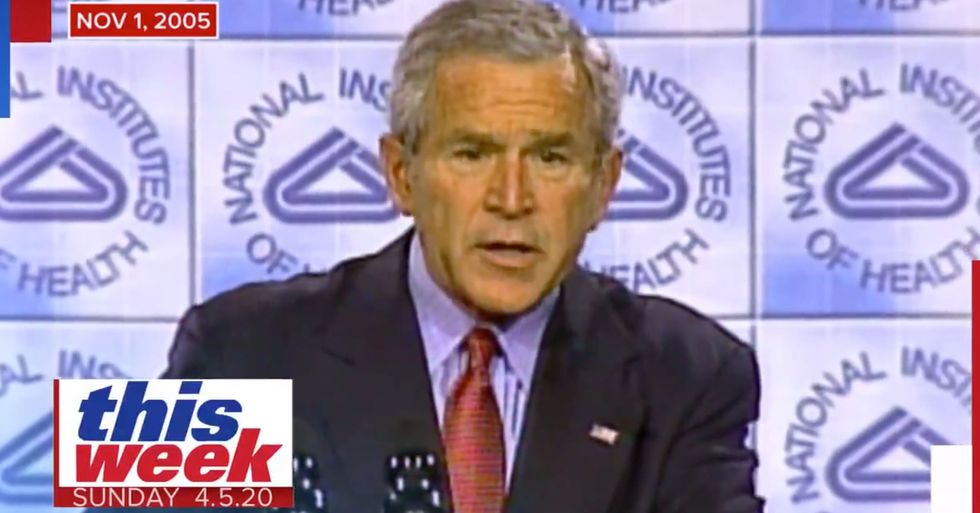 We are living in strange times and we have no idea when things will return to normality. But it seems that George Bush had an idea! Turns out, he predicted the crisis fifteen years ago and the video's gotten people talking.

It's scary how accurate his prediction was...

Last month, President Trump declared a national emergency to combat the pandemic, freeing up $50 billion in federal funding and promising a screening website and drive-by tests.

And now another billionaire has stepped up.

Microsoft founder Bill Gates is the latest in the list of generous donations.

"Every month counts," he said.

As generous as these donations are...

The crisis continues and panic doesn't seem to be easing - with a big thanks to the internet, of course.

The internet has had all sorts of ideas and theories about the virus...

But footage of our former president, George Bush, has gotten everyone talking.

And it shows Bush giving a speech about pandemics.

He described a pandemic as a fire.

"If caught early it might be extinguished with limited damage. If allowed to smolder, undetected, it can grow to an inferno that spreads quickly beyond our ability to control it," he said.

He stressed the importance of being prepared for the unknown...

"But if we wait for a pandemic to appear it will be too late to prepare. And one day, many lives could be needlessly lost because we failed to act today."

People believe that over the years...

@ThisWeekABC Great metaphor! So far I feel like we have very small fires all across the country that need to be ext… https://t.co/E755ThKzUY
— Mako Warren (@Mako Warren)1586118550.0

And he outlined the severity of this crisis perfectly.

People put President Trump in the spotlight and called for a better government during these difficult times.

And keep scrolling for the most recent updates...