George H. W. Bush's Third Groping Victim Was Told to 'Be Discreet' About the Incident | 22 Words 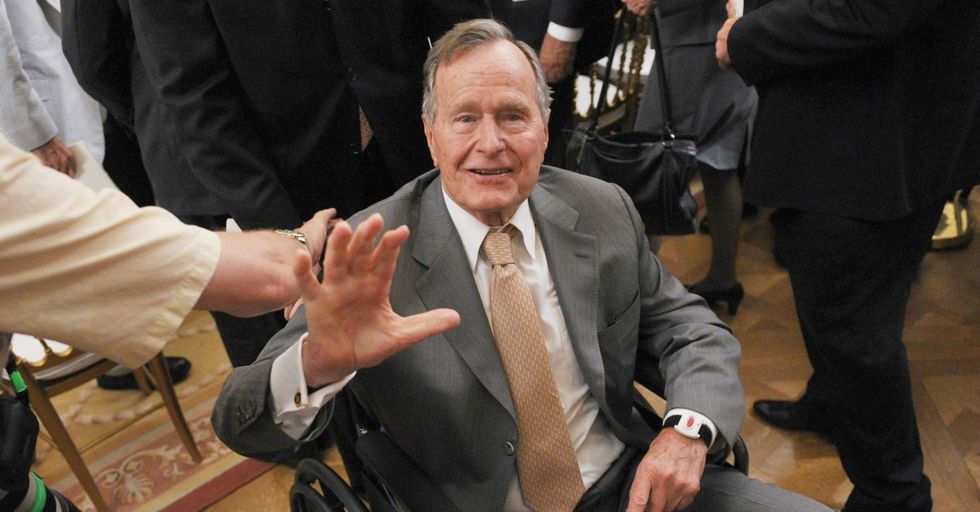 George H. W. Bush's Third Groping Victim Was Told to 'Be Discreet' About the Incident

As more and more women are emboldened to come forward with their stories of sexual harassment and assault, it's becoming clear that predatory men rarely, if ever, only prey upon one woman. Men like Harvey Weinstein and James Toback and now, former president George H. W. Bush, use their positions of power to repeatedly harass and assault women. It's not about an inappropriate response to attraction to one person — it's a pattern of beyond-disturbing behavior facilitated by what these men believe is their untouchable status (powerful film producer, former President of the United States...current President of the United States).

After actress Heather Lind came forward with a harassment allegation against George H. W. Bush, a second woman, actress Jordana Grolnik, came out of the woodwork. Now, a third woman, author Christina Baker Kline, has stepped forward with an eerily similar story of harassment perpetrated by the former president.

Heather Lind was the first brave woman to reveal her story about being sexually harassed by the former president.

In a now-deleted Instagram post, Lind described the time that George H. W. Bush touched her from behind during a photo op in 2014. Jordana Grolnik met the former president during the intermission of the play she was performing in. When she stood next to him for a photo, "He reached his right hand around to my behind, and as we smiled for the photo he asked the group, 'Do you want to know who my favorite magician is?' As I felt his hand dig into my flesh, he said, 'David Cop-a-Feel!'"

Author Christina Baker Kline has a shockingly similar story to Grolnik's — down to the horrible joke.

In an essay published in Slate entitled, "George H. W. Bush Groped Me, Too," Kline describes the encounter she had with the former president in 2014. The details are all too familiar now.

"It was time to take group photos," Kline wrote. "President George H.W. Bush, whom I had not yet met, sat in his wheelchair in the center of the room ... When it came time for my husband and me to be photographed with him, President Bush beckoned me close."

After confirming that she was indeed a writer, he asked, "You wanna know my favorite book?" You probably know where this is going. "President Bush put his arm around me, low on my back," Kline continued. "His comic timing was impeccable. 'David Cop-a-feel,' he said, and squeezed my butt, hard, just as the photographer snapped the photo. Instinctively, I swiped his hand away."

After the photo op, Kline and her husband "were whisked out the door." A woman who said she was a friend of the Bush family drove them back to the hotel. In the car, Kline told her husband about what had just happened. "I was still so surprised that it didn't occur to me to keep it secret," she wrote.

That's when their driver turned around and said, "I do trust you will be ... discreet." Kline said that she remembers thinking in that moment that the woman driving them had heard this story before. That George H. W. Bush, like almost all sexual predators, was a repeat offender. "There must be many of us," Kline remembers thinking. "And now I know there are," she wrote. Kline ends her essay with a powerful quote, ironically taken from Charles Dickens' David Copperfield: "It's in vain to recall the past, unless it works some influence upon the present." In telling these stories, in coming forward about their past experiences with harassment and assault, these women are going to change our present and our future.