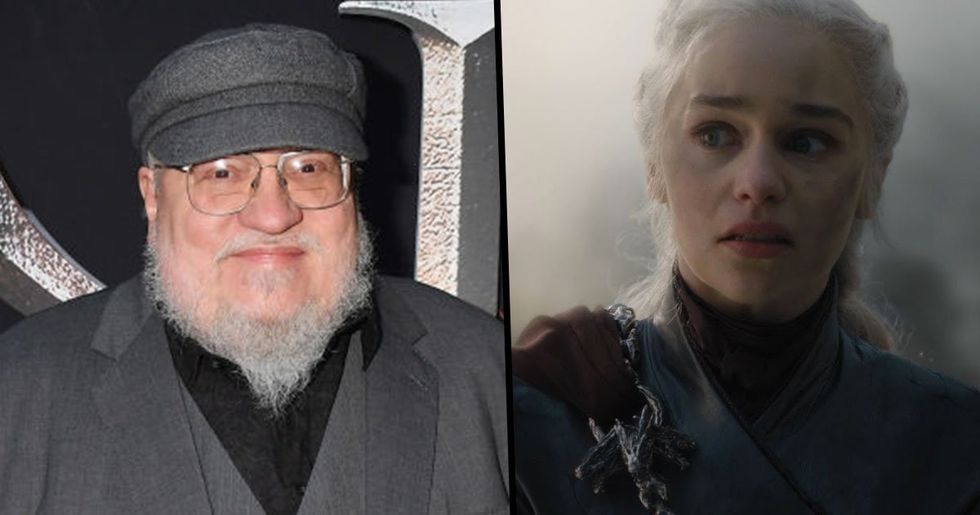 George R.R. Martin Is Not Happy With What the Show Runners Have Done to 'Game of Thrones'

As Game of Thrones is coming to an end, Rolling Stone has decided to see what George R.R. Martin, the author behind the books, is thinking.

Since Maisie Williams and Sophie Turner were on the cover, the magazine wondered how Arya and Sansa came to be.

Turns out, the idea for the Stark sisters came to Martin in the early '90s and were based on historical women - although not anyone specific. Sansa is the classic Medieval princess, while Arya was inspired by the strong females and the feminist movement of the '60s and '70s.

Finding an actress for Arya was the most difficult part of the casting process, Martin revealed; Maisie Williams was the sunshine that cleared Martin's desperation.

One thing that Martin isn't particularly happy with, however, is how much the show has deviated from the books. But he admits that that's his own fault, too.

Scroll down for a video of Maisie Williams' audition and to find out how Martin feels about the show coming to an end.

There's only 1 week left until the much-anticipated Game of Thrones finale.

Rolling Stone recently had Maisie Williams and Sophie Turner, aka Arya and Sansa Stark, on their cover.

The magazine also interviewed Martin about how he came up with the Stark sisters and what he thinks of the deviations between his books and the show.

This is what he wrote about the sisters in one of his earliest descriptions:

"It wasn’t fair. Sansa had everything. Sansa was two years older; maybe by the time Arya had been born, there had been nothing left. Often it felt that way."

"Sansa could sew and dance and sing. She wrote poetry. She knew how to dress. She played the high harp and the bells. Worse, she was beautiful."

"Sansa had gotten their mother’s fine high cheekbones and the thick auburn hair of the Tullys. Arya took after their lord father. Her hair was a lusterless brown, and her face was long and solemn." You could tell right away - Arya and Sansa's differences would be the catalyst for many conflicts to come.

How did Martin come up with the two sisters?

"Well you’re taking me back a long, long way," he told Rolling Stone. "That’s a pretty early chapter… I first began in 1991."

"I wrote about a hundred pages of it before I got distracted by Hollywood stuff, and then I put it aside for like two years before I got back to it."

"Those words you read were actually part of the first hundred pages that I was doing there. When I was writing these, and I was creating a family for Lord Eddard Stark… I knew I wanted it to be a fairly large family, with a number of children."

He added, "I suppose I cheated a little by not having three children who died in infancy in there, which was true of the actual Middle Ages. They had a terrible time with kids who died very young."

"[…] I knew I wanted to deal with the role that women and young girls had in this kind of society. So to show the contrast, [we] have two sisters who were very, very different from each other."

"The Middle Ages was very patriarchal. […] They [women] were used to make marriage-alliances […] But I was focusing on a noble family here as the center of the book."

"At the same time, this is also the era where courtly romance was born: the gallant Knight, the fair lady, the princess, all of that stuff," Martin said. This is where Sansa comes in.

"Sansa completely bought into that, loved everything about that."

"She dreamed of jousts, bards singing of her beauty, fair knights, being the mistress of a castle and perhaps a princess and queen. The whole romantic thing."

"And then [we] have Arya, a girl who did not fit that - and who, from the very beginning, was uncomfortable and chafed at the roles that she was being pushed into."

"You know, who didn’t wanna sew but wanted to fight with a sword, who liked riding and hunting and wrestling in the mud," he added. "A 'tomboy' we would call it, I guess."

It wasn't just one woman that inspired Arya's character, it was a movement of women.

"I can’t say there’s any one specific model," Martin continued, "but a lot of the women I’ve known over the years have had aspects of Arya with them."

"Especially some of the women I knew when I was a young man back in the '60s and '70s, you know - the decade of the sexual revolution and the feminist movement."

"I knew a lot of young women who weren’t buying into the 'Oh, I have to find a husband and be a housewife.'"

There's even a scene where Arya says something very similar. In it, Ned Stark tells her, "Well, one day you’ll grow up and you’ll marry a great lord and you’ll be the lady of the castle."

Martin added, "I knew women who were saying things like that: 'I don’t wanna be Mrs. Smith, I wanna be my own person.'"

Finding an actress who would be able to pull off Arya was, in fact, the hardest part of the whole GoT casting process.

"The casting of Arya was particularly difficult, as I somewhat feared it would be," Martin told Rolling Stone. "I think we looked at more potential Aryas than any other role in this show."

"I wasn’t physically present at the casting - I was back here in New Mexico working on the next book - but I was linked into it on the internet. So they would videotape these girls..."

"I think we probably saw like a hundred girls. And at a certain point in the process I was really beginning to say, 'This is a disaster, we can’t find anyone here.'"

"These are not parts that require the girls to be cute and deliver clever little one-liners to put down their idiot father like you do in a sitcom."

"These are girls that are gonna go through really huge personal traumas. They’re gonna see death and war. They’re gonna see people close to them beheaded." He then added, "So after looking at all these tapes, particularly for Arya, I was saying, 'We are so screwed.'"

But then walked in Maisie Williams.

"Then I saw Maisie’s tape, and it was like, 'There she is. There she is. Arya,'" Martin said. "She’s saying the lines, she’s alive, she’s got Arya’s spirit, you know?"

During the interview, Martin also shared that he wasn't very happy with how much the show deviates from the books.

The differences seemed to begin with the Stark sisters, particularly Sansa.

One example is her marriage to Ramsay Bolton.

Even though Martin has been working in Hollywood for years, he still has "emotional reactions" to such deviations from his books.

"Well, yeah - of course, you have an emotional reaction," he said. "I mean, would I prefer they do it exactly the way I did it? Sure."

"But I’ve been on the other side of it, too. I’ve adapted work by other people, and I didn’t do it exactly the way they did it, so..."

"Some of the deviation, of course, is because I’ve been so slow with these books."

"I really should’ve finished this thing four years ago — and if I had, maybe it would be telling a different story here."

"It’s two variations of the same story, or a similar story, and you get that whenever anything is adapted."

"The analogy I’ve often used is, to ask how many children did Scarlett O’Hara have? Do you know the answer to that?" He added, "Three children in the book, one by each husband. She had one child in the movie."

"And in real life, of course, Scarlett O’Hara had no children, because she never existed."

"Margaret Mitchell made her up. The book is there."

But, as the author and fan of GoT, Martin is sad that the show is ending.

"You know, it’s complex," he said when asked how he feels about the show ending. "I’m a little sad, actually. I wish we had a few more seasons."

"Dave and Dan are gonna go on to do other things, and I’m sure some of the actors were signed up for like seven or eight years, and they would like to go on and take other roles. All of that is fair. I’m not angry or anything like that, but there’s a little wistfulness in me."

"[...] whenever a show ends, and the longer the show lasts the harder it is."

"You’re really with a family," Martin continued. "You’re with them for a large part of the year, and not only working with them, but you’re often living with them in some distant location where you’re all in one hotel together."

"You’re seeing them every day, like five days a week, sometimes seven days a week. They’re very intensely involved in your life."

When asked if the ending of the show is the same as it's going to be in his books, Martin said fans will "have to read them and then they can find out."

If you're wondering if Martin has stopped watching the show because of its many deviations, he assured Rolling Stone that he hasn't.

He also hasn't seen the final episode: "I haven’t… I mean I know some of what’s going on there, but I haven’t actually seen any footage. So I’ll be seeing that for the first time with everybody else."

But he believes that he'll only be partly surprised.

"Well, to a degree," he said. "I mean, I think… the major points of the ending will be things that I told them, you know, five or six years ago. But there may also be changes, and there’ll be a lot added." What do you think will be the final conclusion to Game of Thrones?