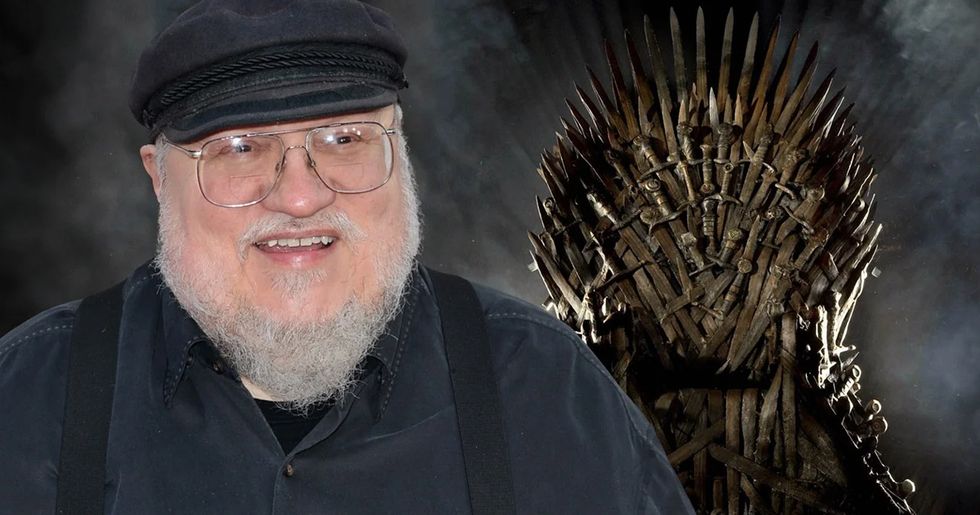 Warning: there are spoilers here for both Game of Thrones and the Song of Ice and Fire books in this article. Read on only if you're fully up-to-date on the goings-on in Westeros!

Pretty much everyone who didn't work on it themselves hated the Game of Thrones finale. The things that actually happened were cool - so if these final six episodes were a PowerPoint presentation, it would have been very successful - but the ins and outs, twists and turns, and hows and whys felt rushed, awkward, and sometimes, even ridiculous.

Nothing went right this last season, and fans of the show have made their opinions known.

It's in that light that George R.R. Martin, creator of the Song of Ice and Fire books upon which Game of Thrones was based, hopped online to write about the ending and how his books might differ from the show. His comments should be reassuring to fans let down by the Thrones finale...

Game of Thrones just wrapped up its eighth and final season.

It's really hard to believe that after almost a decade of having something to talk about with the dullest people in our offices for two months every year, Game of Thrones is coming to an end.

And pretty much everyone hated the final season.

Even the actors hated it.

There's nothing that an actor cares about more than booking work, and the number one way to make sure that never happens is to take a dump all over the work you do book.

In its final season, Game of Thrones' characters acted illogically, like when The Hound arbitrarily decided to tell Arya to go home.

Why would The Hound ride all the way from Winterfell to King's Landing with Arya only to tell her not to pursue revenge when they got there? Literally, nothing happened that would change his mind!

They acted recklessly, like when Dany arbitrarily broke bad.

While we did get hints throughout the series that Daenerys Targaryen had some of her evil, crazy father in her, her sudden shift into darkness came without any of the build-up you need to turn one of the most beloved characters in the history of television into a villain.

They acted hilariously, like when everyone decided Bran should be king...

Um, why? I can't imagine all the power-mad lords and ladies in the Seven Kingdoms would just go, "Oh yeah, I'd love to be ruled by this little kid over here who keeps putting his brain in my dog."

For a show that inspired fans to spend years writing articulate and detailed fan theories...

It seemed like, at the end of the day, Thrones showrunners, David Benioff and D.B. Weiss, hand-waved their way through the final season.

Good morning to everyone except David Benioff and D.B. Weiss. #GameofThrones
— Charlotte (@Charlotte)1557754177.0

What first articulated itself as concerns over how fast characters were travelling around the Realm in season seven, metastasized into concerns that not enough had happened to push characters into the positions that they needed to be in for the finale to happen as it did. It just seemed like these guys didn't care anymore. These final two seasons had the air of an English paper that a student spent three days on, only to rush the conclusion because they were just sick to death of writing about A Separate Peace.

But the real winner of the Game of Thrones final season debacle?

Things seemed to work out pretty well for Bronn. Dude got a big ol' castle.

In a nostalgic post about the show on his blog, George R.R. Martin spoke a little bit about his work on the books...

On his confusingly-titled blog, Not A Blog, Martin wrote, "I’m writing. Winter is coming, I told you, long ago… and so it is. 'The Winds of Winter' is very late, I know, I know, but it will be done. I won’t say when, I’ve tried that before, only to burn you all and jinx myself… but I will finish it, and then will come 'A Dream of Spring'."

He wrote about his ending.

It sounds like the books will wrap up much differently than the show.

For the people who hated the Game of Thrones ending, Martin offered some hope, suggesting that characters who were cut from the show way back in season one will have roles to play in the final two books.

George R.R. Martin did tell Rolling Stone that "the major points of the ending will be things that I told them, you know, five or six years ago." That means expect literary Dany to burn literary King's Landing to the ground as well.

Martin specifically mentioned that book readers will learn more about characters cut from the show, like Jeyne Poole...

Now this omission is pretty much unforgivable. In the books, Catelyn Stark rises from the grave after the Red Wedding and runs around the Riverlands murdering Freys. It is, truly, dope as hell.

Here's the character cut from the show that a lot of fans think lead to the disaster of the final two seasons — in the books, a boy named Young Griff is secretly Aegon VI, the surviving son of Rhaegar Targaryen, and has been raised in secret to be a king. Doesn't Dany's brain-break make more sense if Jon is the second Targaryen heir she has to deal with? I'd feel like I was stuck in a Groundhog Day-sort of scenario if I had to kill my baby nephew for the throne, only to find out shortly afterward that my boyfriend was also a secret nephew.

It should be said that even though so many people hated the final season...

All the frustration/critiques of the final season just speaks to the greatness of Game Of Thrones. It kept us so e… https://t.co/eAG9wX2lpU
— Taylor Rooks (@Taylor Rooks)1558322434.0

And, again, the reception does seem to be universally negative. Even the super dull guy in my office hated it, and I don't think he'd ever had an opinion before in his life.

The story beats that did occur were very cool.

Daenerys trying to be a good ruler and falling short, succumbing to rage and madness? Jon facing the ultimate moral choice between love and duty? Samwell Tarly writing a book? All of these beats are objectively dope. We fans just wanted to see them executed well.

But now that we know the general road map that Martin will take with his books.

When these last two Song of Ice and Fire books come out, sure, we'll be kinda spoiled, but only in very vague terms. When Jon first tells Dany that he loves her, we'll roll our eye with dramatic irony, instead of letting our hearts flutter because we love them and we love love.

We can salivate at the thought of him fleshing out these plot points.

If something as huge as Daenerys going Mad Queen is to come in the books, George R.R. Martin is going to have to take his time to make sure that the details are right. This is a man who spent roughly 30 pages in A Dance With Dragons describing a meat pie feast. (Shout-out to book readers who know why that was so cool.)

Think about reading Dany's destruction of King's Landing for her own perspective.

We'll know her every subtlety, her every mood, her every whim. This heel turn will be handled better than Hulk Hogan's.

Imagine Tyrion's weeks in captivity, ruminating on who should next be king.

On Game of Thrones, we saw that Tyrion fall asleep in prison and woke up weeks later knowing just what to do vis a vis ruling Westeros. But again, in the books, we'll theoretically be privy to Tyrion's every kingly musing.

(And if he does come down on the "nothing is more important than stories" side of things, at least it'll probably be less self-congratulatory.)

We get it, David Benioff and D.B. Weiss. You're writers and the best kings are storytellers. At least Bran didn't say, "No, I cannot take the throne. These two men standing here, who none of us have ever met before — one with hair and beard streaked in silver, one with his hair cropped tight — are the only men handsome enough to rule."

Picture all the weird side characters who will argue about whether or not Bran should be king.

There are still Dornish people in play in the books. Remember Dorne? Also, another Greyjoy uncle is running around, the North is planning some kind of great conspiracy with meat pies, and a former Hand of the King with greyscale is sailing west with a potential heir in tow. All of these folks are going to have to weigh in on a new ruler and each new perspective will be fascinating.

And, who knows, maybe Bran won't end up as king in Martin's books?

Maybe our guy will get iced by the Night King at the start of the next book? It's not like it would jar the story completely. Tyrion would just have to make a speech about why the best kings are, I don't know, coldblooded killers, and then BAM — Arya's queen.

Maybe the changes will be substantial. After all, in his blog, Martin did promise unicorns.

We haven't even had a hint about unicorns in the show or the books! What is this guy even talking about? Although his wording may be important — Martin wrote, "And yes, there will be unicorns… of a sort…" Maybe the last book will be about a girl who is totally cool with hooking up with Ser Davos and his wife, no strings, just whatever happens is cool and no one has to be weird about it?

And there's no way Lady Stoneheart isn't coming to wreck up the place.

Okay last GOT finale prediction - Lady Stoneheart fucks some shit up and then her and Brienne live happily ever aft… https://t.co/eGPN8GwGOG
— Georgie Henley (@Georgie Henley)1558312923.0

Let me tell you, if someone cut my throat after offering me salt and bread, thereby extending guest right to me in their castle, I would mess their stuff up.

Whether or not George R.R. Martin will ever finish these books is an open question.

George RR Martin is 70. He takes years between books, has been slowing his pace as he moves through the series, and… https://t.co/NQBWgHLv5U
— Aaron Ross Powell (@Aaron Ross Powell)1558295088.0

Officially, ol' George has been working on "The Winds of Winter" for the past eight years, and no one knows when, or if, it'll be completed.

But one thing's for sure, his ending will be better than the show's.

George RR Martin gave the #GameOfThrones showrunners what is, in hindsight, an obviously fake ending, but he don't… https://t.co/p3ZwO4CRpL
— TomHoefWrites (@TomHoefWrites)1558320938.0

I know that sounds harsh, but check it out — I'm not saying that literally nothing would be better than the ending we got. I'm saying that our expectations for an ending to this show are now so low that even if George R.R. Martin does something absolutely bonkers, like, say, putting a unicorn on the Iron Throne, we'd be okay with it because we've already been let down before. Although that actually sounds pretty tight. Officially, I now stan for King Unicorn (especially because I've always wanted to hook up with a king, no strings, just whatever happens is cool and no one has to be weird about it).