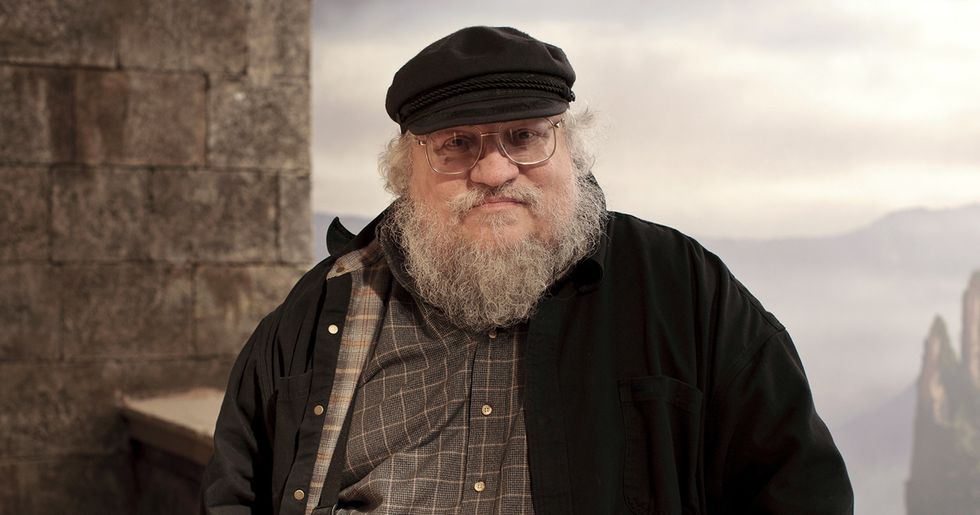 Serious question for all the TV and film buffs out there — has there ever been a good prequel? All the dramatic stakes are lessened when we know that certain characters will live and certain events have to happen. And making a Game of Thrones prequel — an entire show preceding a show that was all about shocking its audience — seems especially daunting.

But much like winter, the prequel is coming. It's actually filming right now in Northern Ireland, one of Thrones' regular locations. Set 5,000 years before the events of Game of Thrones, the prequel will cover an unexplored era of Westeros' history, but one that shares eerie parallels with the show's time period — namely, the fact that those White Walkers are looming.

And that's all well and good, but what the hell's this show gonna be called? We can't call it "The Game of Thrones prequel" forever! George R.R. Martin dropped some hints recently as to what the title could be, and they not only make the prequel show sound dope, they might actually shed some light on what went down in Game of Thrones' last season...

Game of Thrones wrapped up a few months ago.

After eight years, we got all the big answers we were looking for — Daenerys was a villain, Bran was born to be king, and Tyrion... well... Tyrion was kind of a dullard. "I drink and I know things." Yeah, maybe in season one.

And since then, our Sunday nights have been lacking.

As much of a disappointment as that last season was, it was still exciting to gather 'round the TV, positively vibrating with anticipation over Big Twists and Shocking Turns.

Don't get it twisted — HBO's current Sunday lineup is solid.

Big Little Lies is back for season two, and that's great. You can't go wrong with Meryl Streep. And Euphoria is dope as hell. It might be the best new show of the year. But with both of them... I don't know, there's just something missing.

No one's talking the morning after about Euphoria, or recapping it, or posting crazy fan theories. It's just a regular, good show. The only theory you can have about Euphoria is that the next episode might also be good. SPOILER ALERT: it will be.

We need Game of Thrones back.

I have now gone over two months without exposing myself to the risk that a character I love will be beheaded when I least suspect it. And that is just too long.

Or at least, something on its level.

Although... as long as we keep this between us... that show is already on. It's called Succession. Remember how it took Thrones a few seasons to become a phenomenon? Jump on Succession right now and everyone will think you're a TV genius when it pops off. You're welcome.

But there is hope: a Game of Thrones prequel series is in the works.

Right now, in Northern Ireland, the Game of Thrones prequel is being filmed. Naomi Watts is starring in it, although it sounds like it will once again be more of an ensemble show.

And George R.R. Martin is talking about it.

George R.R. Martin, the author of the Song of Ice and Fire books upon which Game of Thrones is based, sat down with Entertainment Weekly and dished a little bit of dirt about the upcoming show. Here's what we learned...

First of all, it will take place 5,000 years before the events of Game of Thrones.

My god, 5,000 years in the past. That is such a long time ago. Will the people of Westeros have even invented armor, swords, and horses?

Westeros will be divided into 100 petty kingdoms.

With no king powerful enough to unite the kingdoms, we could be in for more quick and dirty power-grabs between bit players than the grand, sweeping machinations. And if you thought it was insufferable having one little piss-ant brat demanding to be king, wait until there are 99 of them running around.

We will still see our faves, the Starks.

Under patriarch Eddard Stark, the Stark family lead the North and were maybe the only purely heroic family in Game of Thrones. The most main of the series' many main characters came from House Stark, including Arya, Sansa, and Jon Snow.

(Although I bet they'll be bad guys now.)

Doesn't that feel like just the kind of shocking turn a Game of Thrones spin-off will pull? We think we're settling in with the good ol' noble Starks of Olde and then BAM — they kill a baby.

The Targaryens have not yet come to power.

The great Targaryen Empire was not yet built 5,000 years BGoT (Before Game of Thrones), which means Daenerys' ancestors will still be in Valerya and are unlikely to appear in the prequel.

When you think of Game of Thrones, what's the first thing that comes to your mind? Oh, the Red Wedding? Yeah, me too. But what's the second thing? That's right, it's dragons. In what I think is actually a bold move that will set it apart from its predecessor, the Game of Thrones prequel will go without dragons.

But there will be direwolves!

Which will correct the balance from the last few seasons of Thrones, which focused on dragons over direwolves. It's important to remember that dragons are gross and looks like smelly lizards while direwolves are cute and remind us of dogs, who are objectively the best animals.

The Lannisters? They won't even exist yet!

House Lannister, which gave us Thrones favorites Jaime and Tyrion and, yes, even Cersei, will not yet be founded when the prequel opens up. Hopefully, there's another family in Westeros willing to pay their debts.

But their legendary home, Casterly Rock, will.

A location we heard so much about but never got to see, Casterly Rock will finally make an onscreen appearance in the Thrones prequel. Will it actually

We could see Lann the Clever swindle it away from the Casterlys.

The founder of House Lannister, Lann the Clever at some point swindled Casterly Rock away from the Casterleys. This could be one of those moments that give prequels their power — if the show introduces a character named Lann, we'll know to keep our eye on him.

And finally, the title.

George R.R. Martin wanted to call it "The Long Night."

The basis for many a bedtime story in Westeros, The Long Night refers to the first time the White Walkers marched south to attack the living. This show, then, would depict the truth of those tales.

But the title "The Long Night" was taken by the season eight episode.

What a blunder the Thrones showrunners made naming season eight, episode three "The Long Night." Not only does it rob the spin-off of its most logical title, but everyone just refers to it as "The Battle of Winterfell" anyway. Such a waste of a title.

One suggestion? "The Longest Night."

George R.R. Martin said to EW, “I heard a suggestion that it could be called The Longest Night, which is a variant I wouldn’t mind." That's right, The Longest Night. No night has ever been longer. Take that, season eight, episode three.

That more or less confirms a confrontation with the White Walkers is in the cards.

Ooh baby, the show's big climax is being set up right in the title! It does make me think that this show won't have the same rhythm as Thrones, which would generally build all season to one big battle. What if the prequel show takes place entirely during a multi-year battle with the White Walkers?

Of course, last time we saw the White Walkers, they were a bit of a let-down.

It did seem like, after spending the entire series building up the threat of the White Walkers, Arya Stark simply rolled up, stabbed their leader, and took them all down. I guess they killed a couple B+ tier characters. Big whoop.

Will we even care next time?

What was so frightening about the White Walkers in the first place was that they seemed unbeatable. You can't kill what's already dead, and your side's casualties become their new recruits. Now that we've seen them bested, will the White Walkers still be a threat?

(The answer is yes.)

I do want to know more about the White Walkers. There's still so much more to learn about their goals, their creation, and their metaphorical purpose in the story. New information about such a weird and frightening villain is always welcome.

After all those theories about who the Night King could be...

... what if it turns out to be our favorite character from this new prequel show?

As evidenced by this delightful scene between Jon Snow and Ygritte, Thrones had the ability to create some truly likable characters. What if they do that again in the prequel, and we spend another eight seasons growing to love a new character until the second to the last episode finds them taken by the White Walkers and made their new king? Devastating, right?

Then we'd be retroactively seeing Arya murder the Tyrion or Ned Stark of the prequel.

Our fan theories boiled down to this — we thought there had to be more going on there. The White Walkers couldn't just be some unnatural force bent on destroying the world, could they? It was disappointing to find out they were. So what if, through the prequel series, we learn Arya rams a Valaryan steel catspaw dagger into the gut of a good man we know and understand?

In any event, this prequel series won't end well for anyone.

Game of Thrones is known for killing off its characters, but the prequel series is going to a whole new level — every character is going to die (even if it is only through natural aging — 5,000 years is a long time).