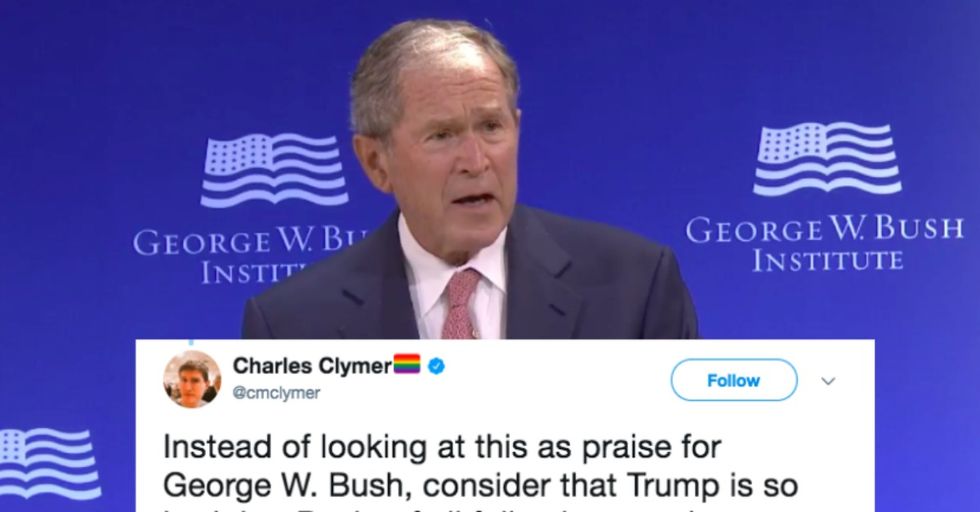 Former president George W. Bush has mostly made headlines for minor stuff since he left office. He's stayed out of the political conversation, seeming only to pop up on our electronic devices when he's having trouble figuring out his poncho. But on Thursday, Bush spoke at the Spirit of Liberty event at the Bush Institute in New York City. It's this speech that immediately made headlines for what The Washington Post called an "unmistakable takedown of Trumpism — and Trump."

What was it exactly that the former president said?

While Bush never mentioned Trump by name, his references were pretty clear.

Speaking about the social and political climate today, he said, "Bigotry seems emboldened. Our politics seems more vulnerable to conspiracy theories and outright fabrication." Other snippets include: "We've seen nationalism distorted into nativism." "We have seen our discourse degraded by casual cruelty... Argument turns too easily into animosity. Disagreement escalates into dehumanization."

"Bigotry or white supremacy in any form is blasphemy against the American creed," the former president said.

"Our young people need positive role models. Bullying and prejudice in our public life setes a national tone, provides permission for cruelty and bigotry, and compromises the moral education of our children. The only way to pass along civic values is to first live up to them." This language clearly evokes Trump — the way he's handled himself since he became president and the "values" he's promoted since taking office.

You can watch his full remarks here. They start at approximately 2:11:40.

As The Washington Post wrote, "Any one of these quotes in isolation could be dismissed as highflying rhetoric aimed at the general coarsening of our political culture... but almost each of these quotes has some connection to Trump." It was clear to those listening that Bush meant his words as a direct criticism of the sitting president, and he gained a lot of praise for speaking so strongly.

But of course, many were quick to point out that George W. Bush hasn't always been the sort of bumbling folk hero he's recently been lauded as.

Before Donald Trump, George W. Bush was as much a villain as the presidency has seen. His presidency was fraught with failure and lies, and his presidential ranking is exceedingly low — 35th out of 43 in a Brookings Institution poll. Many are frustrated that in the wake of Trump, we've seemed to forget that George W. Bush was extremely disastrous for the country in many ways.

It only points out just how bad Trump is. "By the way, folks," Clymer continued in this Twitter thread, "it's all hands on deck. If Pres. Bush wants to call out Trump for racism, I welcome it. Doesn't absolve him of anything."