George W. Bush Sat With Ellen Degeneres at a Cowboys Game and the Internet Is Torn | 22 Words 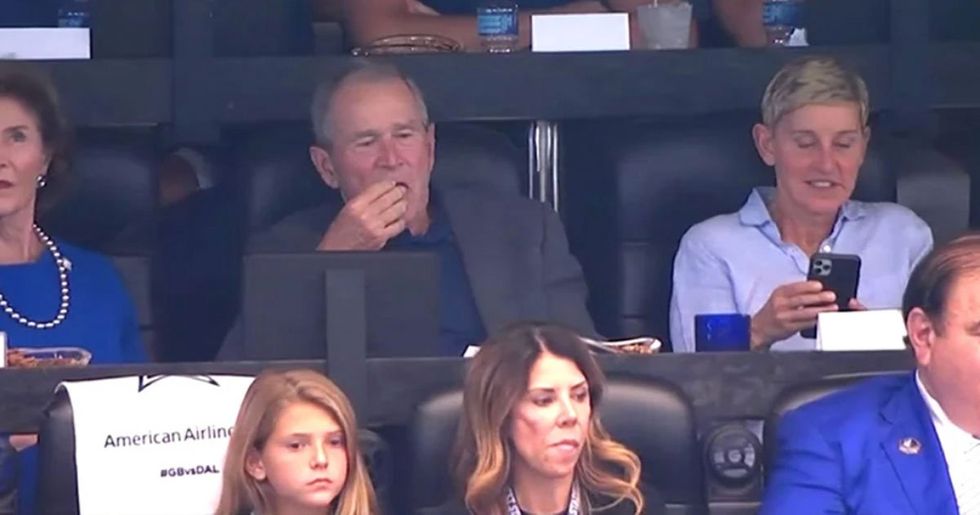 George W. Bush Sat With Ellen Degeneres at a Cowboys Game and the Internet Is Torn

When you think of unlikely duos, who immediately comes to mind? Kanye West and Donald Trump? Maybe Snoop Dog and Martha Stewart? There are a handful of weird pairings but, I bet you didn't see this one coming.

Yes. The former President of the United States and the popular talk-show host sat together at an NFL game. The mere thought has left the internet deep in thought. Why? I have a little inkling, so keep scrolling to see the controversial reasons behind it...

An interaction between an unlikely duo can be enough to set the internet on fire.

And that's exactly what this particular famous pair have done.

George Bush and Ellen Degeneres were sat next to each other at a football game.

You might not think it's a big deal but apparently, the internet has decided, it is a big deal.

The two were joined by their respective wives in the private suite.

According to USA Today, the duo took their seats in the “House that Jerry Built" and were briefly shown on the big-screen.

That was enough to set audiences off.

"Why?" I hear you ask. I have no bloody idea. But then I thought about it. And a few minutes later, it all made sense.

The photo was posted to Twitter by Bar Stool Sports...

It has now received over 8.4K likes with the whole of Twitter tweeting about the strange interaction.

This guy's getting a little violent...

Watching George Bush and Ellen laugh it up together at the Cowboys game has me wanting to start lots of fires indiscriminately.
— Erik (@Erik)1570398752.0

But do you see what I mean when I said the whole of the internet is in flames?

Some people were encouraged to watch the football match...

I didn't realize how badly I wanted to watch football with George Bush and @TheEllenShow until today when I saw the… https://t.co/ZfChG1XdBN
— marie (@marie)1570397383.0

I mean, nothing could make me want to sit through an entire game. Not even Ellen and George.

Why is it hilarious?

Ellen Degeneres and George Bush watching the cowboys game together is hilarious to me
— andrew (@andrew)1570396823.0

It seems a bit hypocritical to me... Keep scrolling to see why.

I wouldn't give any part of my body for that...

Some people are pretty dedicated to the unlikely duo.

Whose smart idea was this?

Because it's slightly problematic...

During the 2004 re-election, Bush decided he was going to push law named: Federal Marriage Amendment which stated that a marriage could only take place between one woman and one man. This meant that same-sex marriage was essentially banned.

And we know Ellen to be a prominent member of the LGBTQ+ community.

So this friendship seemed like it was going to be an unlikely alliance, which it was.

I mean, Bush took it one step further where he was trying to push Christianity and the State together.

That caused many problems for the more secular Republicans of the nation and of course, the Democrats as a whole.

So seeing these two sit and have a laugh together is ... slightly uncomfortable.

Some have called to cancel Ellen and her wife Portia, but as we can tell from when Bush appeared on The Ellen Show as a guest, the two had been friends for a while. However, generally, I do not stan this pairing. But we do stan friendship. So take from that what you will.

Watch the full clip of George Bush on The Ellen Show when he discussed another unlikely couple...

His dog and Vladimir Putin. Wow. And if you want to read about George Bush slating Donald Trump, then keep scrolling to hear his opinion on the current President of the United States.