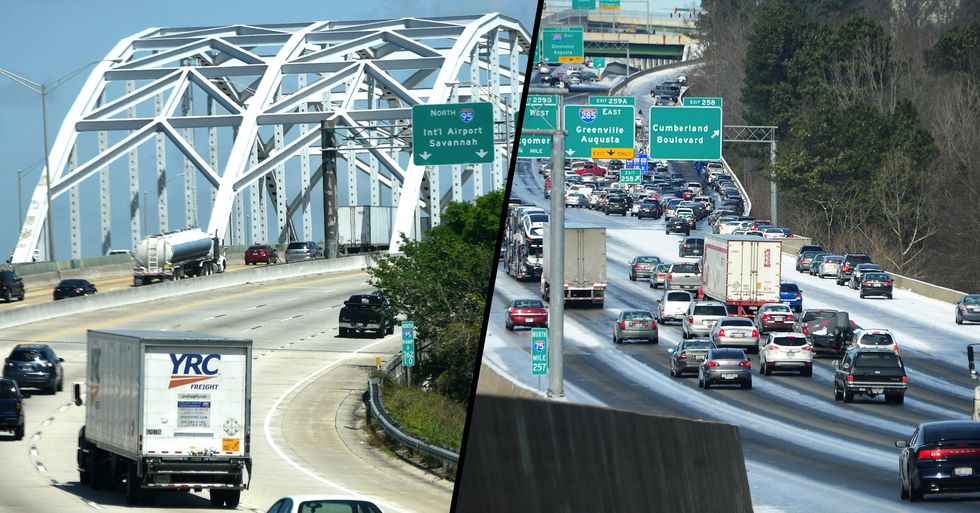 Georgia Government Says the 20,000 Teens That They Allowed to Get Licenses Without Road Tests Will Now Have to Take One

In a sudden plot twist, Georgia officials have backtracked on their license stance by announcing that all those who got a license without sitting a road test will now have to take one.

The experience is pretty anxiety-inducing.

And there have been some huge disasters to prove this.

Like the video that surfaced online from the southern Chinese province of Guizhou in the city of Zunyi of a very new driver getting into a spot of bother, shall we say.

The driver clearly panics when he sees the pedestrians...

Residents helped the sodden man get to a safe area before handing him some dry clothes, according to local media, while the police ensured the car was lifted out the river by crane.

Long story short, many of us probably wish we could skip the whole nervous driver and dreaded test phase...

And it seems for teens in Georgia here in the States, that has actually become a reality (at least the test part, anyway).

Amid the ongoing medical pandemic, Georgia decided to completely scrap the driving test.

Stormi Kenney, who owns a driving school within the state, spoke to Fox 5 Atlanta about the decision.

Georgia teens will no longer need to pass a formal driving test to get a driver's license due to the pandemic. Th… https://t.co/E9WykeJhRv
— Complex (@Complex)1588201486.0

"During these unprecedented times, the Department of Driver Services is trying to make it as easy as a process for people to get their license and to lessen the burden on people right now."

The idea seemed a little out there, shall we say.

And not totally safe. "What the executive order does, it allows the teen driver to go to that next phase without having to take that road test because of social distancing problems, obviously, in trying to provide the test," said Spencer Moore, the commissioner at the Department of Driver Services, to WSB-TV

Especially since it's now parents that will be giving the green light on whether their child gets a license.

Yep, really. Kenney clarified that, though road tests have been axed temporarily, drivers will still have to complete all previous requirements, including racking up forty hours of supervised time behind the wheel.

Not everyone thinks it's a good idea...

"I think it would be beneficial to have an unbiased set of eyes on my driver, I think I might be quick to let her get her license not knowing if she knows all the laws," said one concerned parent who spoke to Fox 5.

Many people were quick to laugh at the idea...

Georgia teens who got their license without taking the test driving once everything is okay https://t.co/vudgGJnotG
— JALEN🐢 (@JALEN🐢)1589336873.0

It was a highly controversial decision...

And, of course, teens all across Georgia have been rejoicing at the idea of not having to sit the dreaded road test.

But now, mere weeks after the rule was implemented...

Their dreams have come crashing back down around them.

There has been a sudden backtrack.

The governor of Georgia has changed his tune regarding the controversial move that gave nearly 20,000 teenagers their drivers licenses without having to take a road test.

He has gone against everything he said.

Governor Brian Kemp issued an executive order Tuesday saying that anyone who’d received a license under the road test waiver will now have to take the test within the next few months in order to keep it.

This is huge news for anyone who has recently obtained a license without a test.

Kemp said that the Department of Driver Services must “provide a process" for these drivers to complete the road test no later than September 30th this year and that the tests could be completed either with examiners riding in the car with applicants or by remote means.

And for those who are annoyed by the sudden rule change?

Well, this was never a permanent thing. “That was always the case, we just wanted to clarify that," Kemp stressed, according to the Atlanta Journal-Constitution.

“Anybody who has gotten the driver’s license but hasn’t taken the test - even if they’ve met the criteria of so many hours on the road and went to driver’s school -they’re still going to have to come back and take the driver’s test." Good luck. For more bizarre rules of the road, keep scrolling to read about the driver who was fined for drinking water...