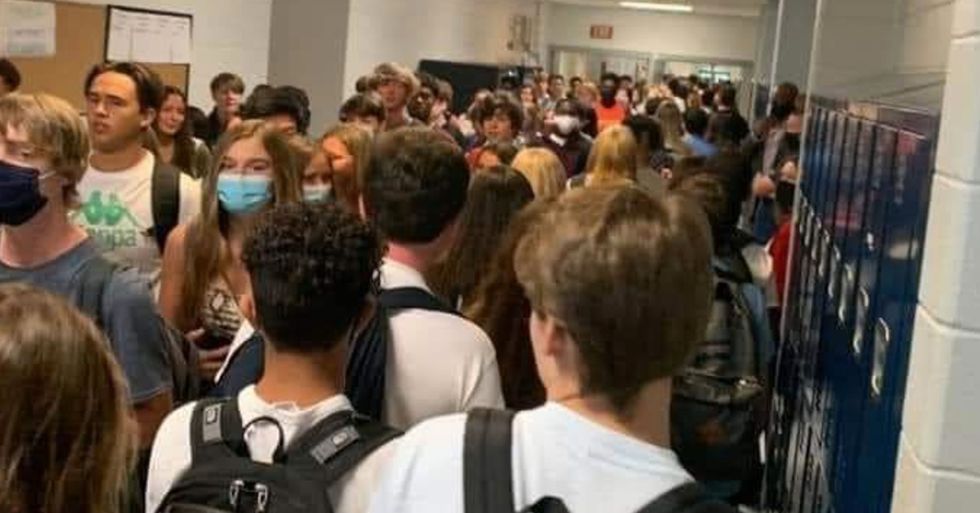 A high school in Georgia has hit the headlines for all the wrong reasons this week, and reactions have been very strong on social media...

But one high school has been catapulted into the spotlight this week.

And not for the best of reasons. Just wait until you see the pictures...

Including a high school in Paulding County, Georgia.

And they are not best pleased with their newfound internet fame.

Students, teachers, and parents at North Paulding High School already had concerns about the school reopening.

With many admitting they felt the whole thing was being rushed - especially since some staff and students had previously tested positive for the virus.

However, students were told they could face expulsion if they don't attend.

But, it seems everyone was justified in their concerns...

Upon arriving at the school, students were shocked to see how crowded the hallways were, with hardly anyone wearing masks.

So, one of the teens, fifteen-year-old Hannah Watters, decided to take a snap of the crowds and upload it to social media to highlight the issue. "Not only did they open, but they have not been safe," she said. "Many people are not following CDC guidelines because the county did not make these precautions mandatory."

As several other images emerged from students, the shocking snaps quickly went viral.

"Day two at North Paulding High School. It is just as bad. We were stopped because it was jammed. We are close enough to the point where I got pushed multiple go to the second block. This is not ok. Not to mention the 10% mask rate," Watters wrote alongside her snap, pictured above.

She didn't stop there, either.

To highlight her point further, she made a tally of students wearing masks in her classes.

But, when her school found out about the social media posts...

They were far from happy.

Watters said she was pulled into the school's office around noon on Wednesday.

There, she was told she had violated the school's code of conduct. "The policies I broke stated that I used my phone in the hallway without permission, used my phone for social media, and posting pictures of minors without consent," she revealed.

The teen says she received a 5-day, out-of-school suspension for posting the photo.

And it appears she's not the only one either.

Another student, who did not want their name used, revealed to Buzzfeed that they were also suspended for posting photos on Twitter.

Watters said: "I think my punishment’s severity was excessive, but I do understand that I violated a code of conduct policy," adding this was her first time being reprimanded by the school. "We have a progressive discipline system. When disciplining me and the other student, they skipped level one and went straight to two."

“Children do not waive their constitutional rights in school, and the district abused its discretion in suspending these students," he said in a statement. "It could not have come at a worst time as families are struggling to cope with the social and economic pressures brought on by the pandemic, including the abrupt school closures in March that disrupted the education of thousands of students."

After seeing all the snaps on social media, people had a lot to say on the matter.

Watters and her family plan to fight the suspension.

Another Georgia school has landed itself in the headlines recently and parents have made their opinions on the matter pretty clear... Scroll on for the full story.