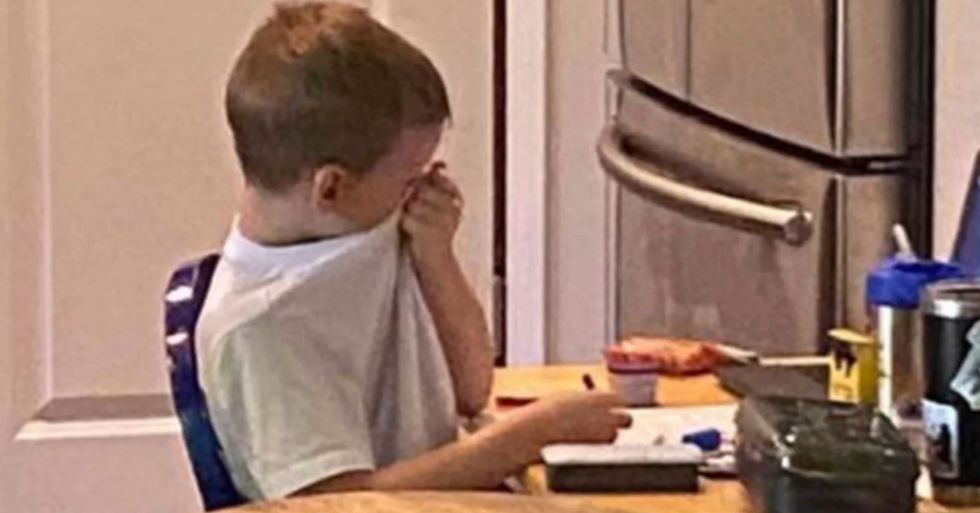 One mom decided to share a picture of her 5-year-old son crying in frustration while participating in socially distanced learning and it has really broken all of our hearts.

Students are finding it hard to adjust to their new way of life.

One mom in Georgia found that her son was finding socially distanced learning really difficult so decided to raise awareness on the issue.

The shift back to "normality" was never going to be easy...

But children are finding it particularly hard to adjust to these new rules.

Students in certain districts are starting to return to school.

The move divided opinion among parents and students.

As over 100,000 children have now tested positive for coronavirus.

But it seems that many people have forgotten that the global pandemic has seized the entire world...

Despite the risks, schools are opening their doors again.

There seems to be no way for the school system to deal with this.

But some schools have opted for a more appropriate response to the pandemic.

They have shifted to virtual learning to make it safer for their students to continue learning but from a more appropriate environment.

However, this is taking a toll on younger students.

Along with the stress of starting Kindergarten, one 5-year-old also had the added stress of dealing with virtual learning. At one point, things got so bad that he started crying and used his t-shirt to wipe his tears away.

The young boy was finding the situation very stressful.

And after seeing him in so much distress, his mom decided to snap a picture of him to share with the internet so she could raise awareness about the issue.

And many other mothers jumped in to share their experiences too.

Keep scrolling to see how other schools are trying and failing to implement safety measures while students attend classes.