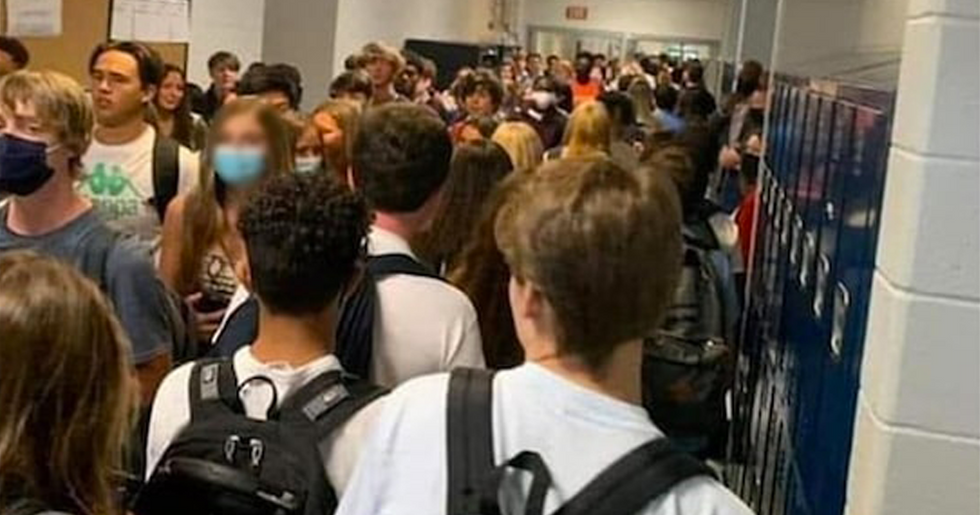 During the current pandemic, the use of face masks has long been a debate, but as we start returning to normality, they are needed more now than ever.

It seems as though a lot of people don't care about it though as displayed in photos that have emerged from schools showing teens packed into a narrow hallway as they head to their classes.

The pictures are truly disturbing, and the school's statement has left parents and students shocked...

Over recent months, we have had to adapt to a new way of living.

The pandemic has made it so that we can't go about living our lives the way we used to.

However, in the past few weeks, we've been trying to get back to normality...

But a lot of others haven't and the latest pictures to emerge from inside a school in Georgia have been disturbing, to say the least.

As schools start opening, it seems as though masks and social distancing rules have been long forgotten.

Paulding County re-opened their doors to students this week, but the results have shown us that certain rules are almost physically impossible to implement due to the large volumes of people in one area.

In the pictures, you can only see approximately 4/5 students wearing masks in an extremely packed hallway.

Not only that, but students are clearly not socially distanced.

And we've all been left questioning if this is a good idea.

@Freeyourmindkid I'm suddenly wondering if the reason non-teachers think going back to school can work is that they… https://t.co/fnUXWpZF53
— Altaira Morbius (@Altaira Morbius)1596545874.0

@Freeyourmindkid @blairboo16 My family has a legitimate fear that the first day of school will be the last day they… https://t.co/en0zXC08Rt
— Randy Koehn (@Randy Koehn)1596546070.0

Children should not be forced to go to school if their lives are in danger.

And it also looks like other places are having similar problems...

It's a COVID breeding ground, at this point.

Is it really worth putting all these lives at risk?

What is wrong with people?

In a document obtained by TMZ, the superintendent of the school tried to downplay the problem.

The document outlined the conditions of the school, even going on to hint that the optics don't look too good at the moment, but parents shouldn't worry... Confusing, right?

The letter was sent out to a bunch of worries parents who sent their kids to school without masks...

The superintendent also recognized that "there is no practical way" to enforce students to wear masks but they are encouraged to do so. If you're confused about the stance, don't worry, we are too.

Here's a disturbing picture from the hallways of Paulding County:

I would not be sending anyone, let alone a child, into such dangerous territory. Let's just hope the President re-thinks this entire thing and closes schools as soon as possible. Keep scrolling to see other places that people are refusing to wear masks...