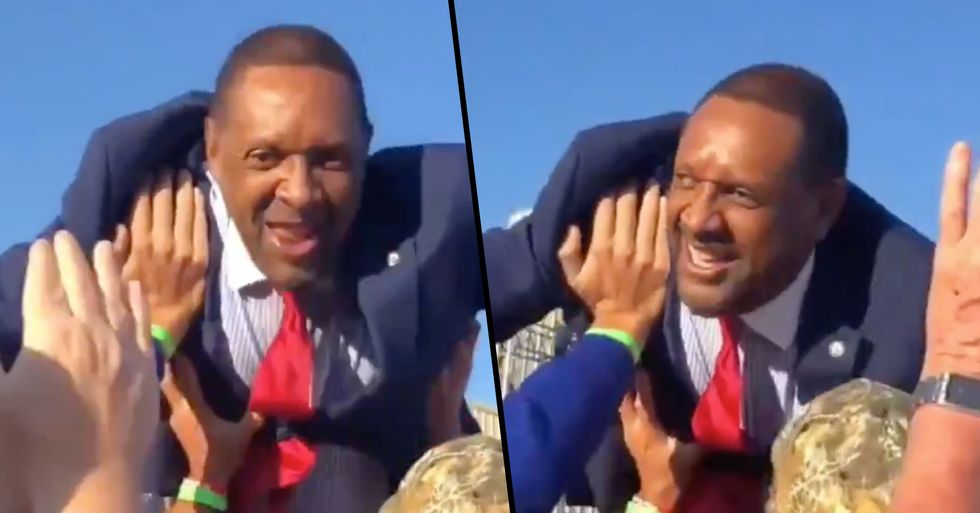 Georgia State Rep Vernon Jones decided that a pandemic wasn't going to stop him from crowd-surfing at a Trump rally in Macon.

The sights were... strange, to say the least.

During a global pandemic, you would think rallies with thousands upon thousands of people would be avoided, but not Trump ones.

Herds of people flock to the events to catch a glimpse of their hero.

Yeah, for some reason, they want to see Donald Trump in the flesh.

Of course, the election is soon so Joe Biden is also out doing the rounds.

But his have been slightly (only slightly) safer as there was some social distancing.

But the folks at Trump rallies really don't know what social distancing is.

The events also seem to contain some strange sights...

Have you ever wondered how exactly the President of the United States would dance along to the Village People's hit, "YMCA?"

I know, it sounds like a crudely edited meme you'd find in the depths of Twitter binge, doesn't it?

But the most recent incident has to be the strangest we've seen so far.

Georgia state rep. Vernon Jones decided he was going to crowd surf amongst supporters in Macon.

The pictures were a little disturbing...

Actually, that's an understatement; they were very disturbing.

But what else would you expect from followers of a man who said the global pandemic was nothing but a sham?

Until he got infected with it himself, but he lived to tell the tale... And downplay the virus of course.

Remember when the President tweeted this?

Now, telling a country to not be afraid of a virus that has killed over 200,000 Americans is an extremely reckless thing to say...

It's vital for the president to stop downplaying the virus.

Clearly, he is under the impression that he holds some sort of "immunity."

During a phone call with Fox Business on Thursday morning, the President revealed some details about his health, including the fact that he's a "perfect physical specimen..." and is now "immune" to coronavirus.

And, when he was asked if other people would get the treatments he got while recovering, he said this:

“Yeah, they’re going to get it. I’m back because I am a perfect physical specimen and I'm extremely young, and so I am lucky in that way." Young?

Scientists have not yet confirmed if this is the case, though they are hoping that it's true.

Because despite the blatant lack of scientific evidence...

Trump is evidently so wrapped up and convinced by his claims of immunity that he decided it is time to start hosting very public events again.

A few weeks ago, an event at the White House quickly turned into a full-blown rally.

The event was officially a "peaceful protest", but looked, critics said, much like a Trump campaign rally.

The turn-out was shocking.

Around 2,000 Trump supporters descended upon the White House to hear the president's speech, where he made yet more inflammatory claims about the virus.

But he wasn't finished there.

The president has already hosted rallies in Florida and Pennsylvania.

The most memorable moment to come out of them was his horrendous dad dancing...

At least he's brought some laughter to our lives...

But now, another moment has stolen the spotlight from the president.

Georgia state Rep. Vernon Jones decided to crowd surf during a Trump rally that took place in Macon, Georgia during a global pandemic.

For those of you that don't know, Jones is a Democrat that endorses Trump...

Weird flex but okay, we'll go with it.

The state rep decided that a global pandemic was not going to stop him from throwing his body into a crowd of supporters.

Apparently, the prized moment was short-lived as he was returned to his feet after a few minutes.

But the pictures from the event have left everyone appalled...

Why did GA State Rep. Vernon Jones crowd surf face down? Did he understand that putting your junk down when surfing… https://t.co/KVyhJGhrrv
— HR Christian (@HR Christian)1602964926.0

@AlyssaNo_L @realDonaldTrump Crowd surfing in the middle of a pandemic? Are you kidding me?
— Merritt Kelly (@Merritt Kelly)1602892452.0

@AlyssaNo_L @lookner @realDonaldTrump So much for respecting the nurses and doctors who are putting themselves on t… https://t.co/zL7v6b2HPG
— Black Japan (@Black Japan)1602889031.0

A photograph taken by Alyssia Pointer has been going viral on Twitter...

For all the wrong reasons, of course.

With only a few weeks left until November 3rd, keep scrolling to see some news about the 2020 elections...