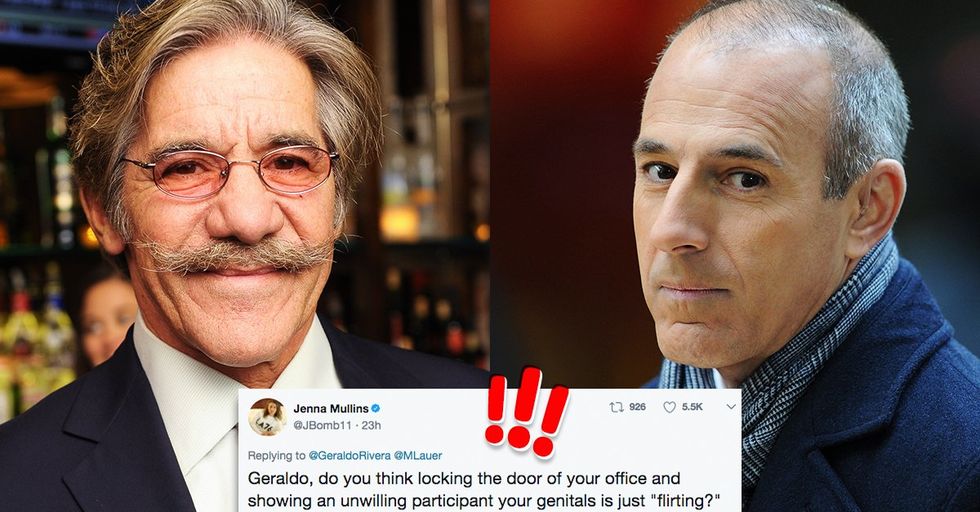 This Wednesday, longtime Today show host Matt Lauer was fired from his job at NBC for "sexual misconduct." In a matter of hours, details poured out about the predatory sexual behavior Lauer had routinely engaged in while enjoying a $25 million per year position at NBC:

Lauer had a button in his office to lock in his hapless victims so "they could be alone." He liked to play "f***, marry, or kill," so he could talk about the co-hosts he wanted to sleep with. He once gifted a coworker with a sex toy and explicitly written instructions of how he would use them on her.

Basically, Lauer had behaved in the most despicable ways possible – both sexually and in his capacity as one of the stars of NBC.

As a result, he was roundly condemned across social media, and everyone was happy his reign of terror finally had come to an end.

Everyone, that is, except for Geraldo Rivera.

The former lawyer turned reporter (who, as you will recall, once tweeted a half-naked photo of himself) quickly jumped to Lauer's defense on the social media site Twitter, where he issued a series of tweets.

Sad about @MLauer great guy, highly skilled & empathetic w guests & a real gentleman to my family & me. News is a flirty business & it seems like current epidemic of #SexHarassmentAllegations may be criminalizing courtship & conflating it w predation. What about #GarrisonKeillor?

A jerk's a jerk in dating. #SexHarassment should be confined to situations where superior imposes himself on subordinate who feels unable to complain because of power of perp or feared consequences to victim's employment. Shouldn't be used to get even w bad bosses or hated ex's

#SexHarassment allegations should require: 1-made in a timely fashion-say w/n 5 yrs. 2-some contemporaneous corroboration, like witnesses, electronic or written communications. W $ settlements in multi-millions slight chance exists some victims are motivated by more than justice

This issue is so red hot right now there is no room for any thought or opinion but hang em high. If News wasn’t (formerly) a flirty biz then how do we explain so many newsroom courtships that have led to happy marriages?

In the tweets, Rivera made several infuriating, and downright malicious proclamations.

He subtly insinuated that Lauer's victims had used sex assault allegations to get back at Lauer for being a "bad boss," and further opined that allegations should be made in a "timely manner," say "[within] 5 yrs." He finally suggested that news was a "flirty business," as evidenced by "many newsroom courtships that have led to happy marriages."

Rivera's tweets were a lot of bunk and other less print-friendly words, but it is important to note a few things.

Rivera may have thought he was offering another perspective to the "flirty business" of news, but he forgot a teeny-tiny detail.

He had already been accused of assault by Bette Midler during an interview with Barbara Walters in 1991. Of course, the cultural climate at the time was much different, so it wasn't so much an accusation as it was a statement of unfortunate fact.

During the interview, Walters asked Midler what she thought of Rivera's claims that she and he had engaged in a "torrid sexual affair."

At first, Midler rolled her eyes, but then she quickly said that she was amused by Rivera's recounting because it had come at a time when she was now being regarded as a staid "little old lady-type." "He comes along and tells the world how great I am..." Midler said with a laugh. "Well, his penis went to his head."

Within moments, however, the recounting took a turn for the sinister, although Midler tried to play it off as just another salacious moment in her life.

"The truth about it is, um, I didn't remember," Midler says. It was a very odd and unsettling statement – especially if you consider her next few words. "One thing I did remember was how I met Geraldo, and that was not funny."

Midler then lays out a horrific account, which she states matter of factly and with an easy smile – (again, this was 1991, and predatory men weren't being taken to account the way they are today).

"Geraldo and his producer came to do an interview with me, in the ’70s, the early ’70s," Midler said. "And this was when he was very, sort of, hot. And he and his producer left the crew in the other room, they pushed me into my bathroom, they broke two poppers and pushed them under my nose and proceeded to grope me." "Poppers," by the way, is slang for the recreational drug alkyl nitrite, which is used primarily by gay men as sex drug since it's a muscle relaxant and aphrodisiac that loosens up muscles.

Midler's story may seem a bit... so allow us to unpack the true horror of it for you.

Two grown men forced an adult woman into a bathroom where they dosed her with an aphrodisiac and proceeded to grope her. She doesn't remember  rape. As Walters looked at Midler in shock, Midler expound, "Groped me. I did not offer myself up on the altar of Geraldo Rivera. He was… he was unseemly." Walters, of course, quickly pivoted to other subjects, but then, she is the woman who shut Corey Feldman down after he accused multiple Hollywood figures of assault in 2013, and defended Woody Allen in 2014.

Even more awful, Rivera corroborated the story, although he made it seem like a lusty and willing conquest.

I still cringe everytime I see Geraldo Rivera I wonder why @FoxNews even has him on as a commentator discussing sex… https://t.co/S2BeXogbco
— Citizen Dale (@Citizen Dale)1510925576.0

People on social media have not forgotten this incident happened, and are taking Rivera to task for his actions.

Hindsight is 20/20, as they say, and now, people are remembering that Rivera is kind of a perv. And by kind of, we mean totally. In light of Rivera's own tweets, Fox News put out a statement saying "Geraldo's tweets do not reflect the views of FOX News or its management."

.@FoxNews sent me the following statement in response to @GeraldoRivera's tweets: "Geraldo's tweets do not reflect the views of FOX News or its management. We were troubled by his comments and are addressing them with him." https://t.co/kfS5oxNgpo

On Thursday, Midler tweeted that Rivera had never apologized for the incident.

Rivera has yet to issue a statement, although he did apologize for his former tweets with a tweet.

The entire incident has reminded us of an ancient adage that is appropriate even in these halcyon days of technological dexterity: Those who live in glass houses shouldn't throw stones.