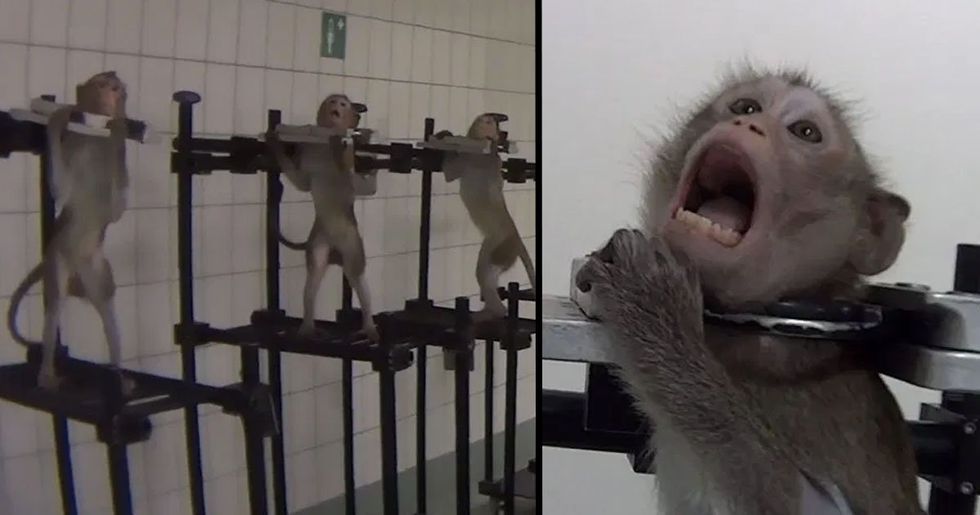 It is a heartbreaking reality that animal testing still goes on around the world, despite many efforts being made to put a complete stop to the cruel practice.

Innocent animals are put through absolute hell in the name of science and it is completely unnecessary.

However, a German lab that inflicted horrific experiments on helpless animals has been raided this week and, thankfully, it is facing closure after shocking undercover footage emerged.

Warning: this article contains distressing content that may upset some readers.

Animal testing is done in the name of research and science.

But this does not make it okay.

There are laboratories all around the world that conduct animal testing.

Animals used in these laboratories are deliberately harmed, not for their own good, and are usually killed at the end of the experiments.

These experiments are cruel and inhumane...

They often involve injecting and force-feeding animals with harmful and toxic substances, exposing them to radiation, surgically removing animals' organs and limbs, forcing them to inhale toxic gasses, and subjecting the poor creatures to frightening situations in order to induce anxiety and depression.

A wide variety of animals are used in these labs.

Different species of fish are used, but mammals such as rabbits, rats, cats, dogs, and monkeys are the most popular species in animal testing.

The majority of these poor animals spend most of their short lives in these labs.

Their lives are filled with nothing but neglect, fear, and pain. Animals are kept confined in small cages and are only given human contact when they are inflicted with horrific and painful tests and experiments.

It has been proven that testing on animals is completely useless.

PETA found that studies published in prestigious medical journals have shown time and again that animal experimentation wastes lives—both animal and human—and precious resources by trying to infect animals with diseases that they would never normally contract.

So testing products that are designed for us humans on animals is not only useless but is a cruel and unnecessary waste of time.

Testing on animals for anything is useless, never the less.

Science and research will never be an excuse to inflict suffering on innocent animals.

The only U.S. law that governs the use of animals in laboratories, the Animal Welfare Act (AWA), allows animals to be burned, shocked, poisoned, isolated, starved, forcibly restrained, addicted to drugs, and brain-damaged - all without pain killers.

It is utterly bewildering that animal testing isn't completely illegal yet...

A lot of countries in the world have completely banned animal testing, but there are a few places out there that allow this barbaric practice and some labs continue to do it illegally.

There are many organizations out there who work tirelessly to put an end to this practice.

Cruelty Free International is one of these organizations, and they work hard together to put an end to animal testing and cruelty worldwide.

Animal activists Soko Tierschutz, along with Cruelty Free International, carried out an undercover investigation to reveal the harrowing abuse allegedly taking place at the LPT Laboratory of Pharmacology and Toxicology in Mienenbuttel, on the outskirts of Hamburg.

The undercover footage was shocking.

It showed cats and dogs crammed into small cages smeared with blood and feces, the distressed cats had open wounds on their front paws and the dogs appeared nervous and agitated after having tubes forced down their throats. Monkeys were seen to be kept in restraints as experiments were carried out on them and they were heard screaming out in pain.

The conditions these poor animals are kept in are heartbreaking.

The activists who went undercover could see that the animals, especially the dogs and cats, were in desperate need of human affection. Authorities in the Hamburg region performed a spot check at the lab after the footage went viral online, and they confirmed the disturbing allegations.

Charges have been filed with the Public Prosecutor in Luneburg for alleged violations against animal protection laws.

Speaking to The Mail Online, a spokesman for the local regulation authority Laves - the Lower Saxony State Office for Consumer Protection and Food Safety - said following the inspection: "We found the cages were far too small, just as the activists claimed."

The lab will face closure if the investigation proves their practices to be unlawful.

Minister for Agriculture Barbara Otte-Kinast said: "If these allegations prove to be true, they would have to be punished and quick consequences are to be put in place. A possible revocation of the animal testing license is being checked by Laves."

This lab needs to be closed down, immediately.

If the laboratory’s license is revoked, it would be forced to close its doors immediately. However, people have questioned why the veterinary inspection office hadn’t picked up any irregularities beforehand.

The police are currently investigating the lab after the activists reported it.

Michelle Thew, Chief Executive of Cruelty Free International, stated: "Our investigation has uncovered appalling animal suffering, inadequate care, poor practices and breaches of European and German law." "We are calling for the Laboratory of Pharmacology and Toxicology (LPT) to be closed."

Action needs to be taken.

"We are also calling for a comprehensive review into the use of animals in regulatory toxicity testing in Europe, including the UK," Thew went on to say. "Every investigation, without fail, shows a similar tale of misery and disregard of the law."

The undercover video can be viewed here...

As hard as the footage is to watch, it is truly eye-opening as to what continues to happen behind the backs of the government to our poor animals. If it wasn't for the dedicated work of Cruelty Free International, these horrific practices wouldn't be uncovered and animals wouldn't potentially be saved. Let's hope that justice is served for these unfortunate and innocent animals.