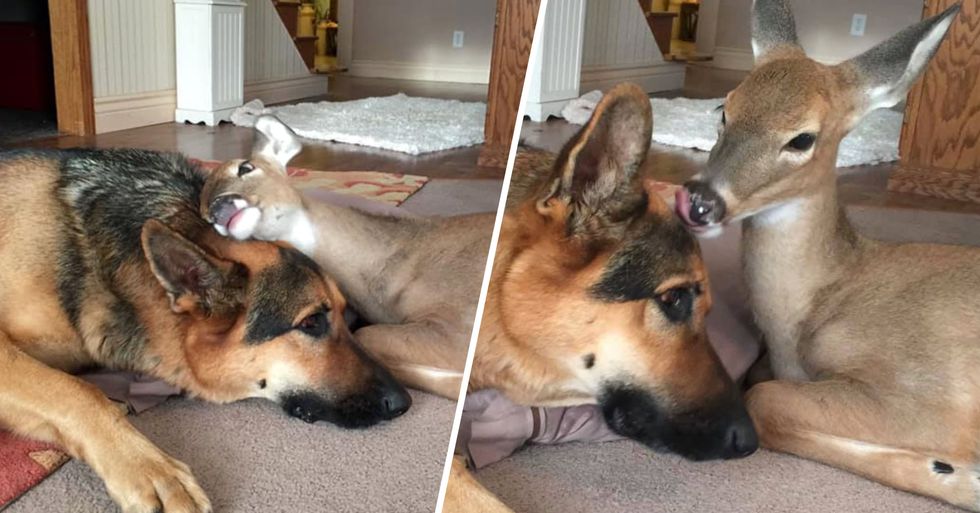 Imagine a world without dogs... you can't, can you? And if you can, well then there's something seriously wrong.

While the world is going through the most movie-like pandemic, we can count on our K9 companions to bring a little sunshine.

Contrary to John Lennon's belief, dogs are all you need.

And it's not hard to see why these furry companions are so well-loved...

I bet you've never seen a service dog for other animals?

Just like us, dogs want a purpose. Being given a job keeps them happy, and mentally healthy.

Which is just what Sarge needed.

As a puppy, he was known to bite toes, chase his siblings around, and just be a general grump.

The now 9-year-old German Shephard has found his purpose.

That predictable puppy behavior came to an end when his mom brought home the most unexpected guest.

Everything changed when Cheryl Stephen found a fawn lying in the road.

The mother had clearly abandoned it, so Cheryl took it upon herself to give "Buckwheat" a home. You can tell by the adorable video that Sarge was more than happy about this new arrangement!

It launched a newfound purpose within the pup.

“Something clicked in Sarge and he took to Buckwheat instantly," said Cheryl. “He wanted to be involved with every aspect of Buckwheat’s care."

Sarge became the most unlikely parent.

“He took on the role of being Buckwheat’s guardian," she added. “None of the other dogs were allowed near the baby."

You'd think that a little fawn might be intimidated by a large dog, but Buckwheat was just glad to have a companion who made him feel safe.

Sarge stayed patiently by his side.

With every baby step, he was there to guide him, encouraging him to explore, while always keeping him out of harm's way. The pair just couldn't be cuter, the video shows what a deep bond they both had.

Cheryl was surprised by the bond.

“When we’d take Buckwheat outdoors, Sarge walked alongside him and kept him from wandering," Cheryl said. “As Buckwheat grew and began venturing out on his own a little more, we would have Sarge go find him and bring him back home."

Sadly the time came for Buckwheat to be released.

But it didn't take long for the story to go viral, causing Cheryl's phone to ring off the hook from people who'd found injured or orphaned fawns.

It has given Sarge a new lease of life.

“When I walk in the door carrying a fawn, Sarge springs into action. He wants to check them over and he will frantically sniff and nose around to determine their condition," Cheryl said. “The fawns are drawn to Sarge and feel safe in his presence. Sarge won’t leave their side."

Sadly not all the fawns make it, which is hard for Sarge to deal with.

“He grieves for days, with his head hung low and won’t eat," Cheryl said. “He has laid on the graves of his beloved fawns and refused to come inside." I've never heard something so heartbreaking. It's easy to see from the video, the love Sarge has for the fawn's is unbreakable.

The hard times never stop Sarge from being the best step-dad he can be!

It's in dark times like these that animals really do teach us how to be better people. Keep scrolling for some serious puppy power...