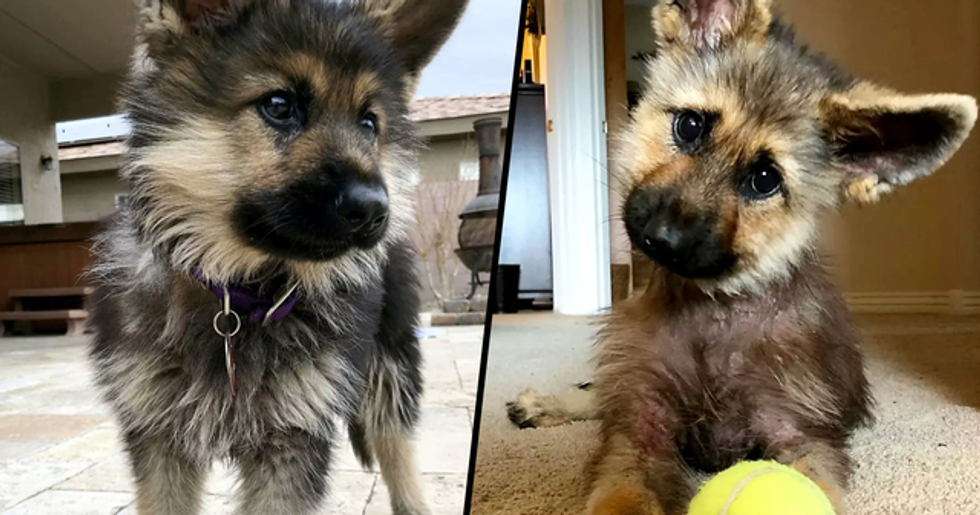 It's a commonly known fact that these days, more and more dogs are suffering from genetic defects and disabilities as a result of turbulent breeding.

Despite the heartbreaking reality of his special genetic defect, Ranger is undeniably adorable.

He had a difficult start to life, but is now living his life to the fullest, and is even raising awareness of his disability through his viral fame. Keep scrolling to hear Ranger's story...

There's no denying that we have completely ruined our beloved dogs.

Ever since the wolf first became domesticated all those 15,000 years ago, we humans have been dog crazy, and have become obsessed with creating as many different breeds as possible.

We have created hundreds of different breeds.

And they all look completely different.

Ranging from the Great Dane...

All the way down the divaish Pomarian, dogs nowadays come in all shapes and sizes.

And when you look at a chihuahua...

It can be quite difficult to remember that it once came from the notably more majestic wolf.

Yet despite how cute many of these pooches are...

Some breeds come with serious health issues as a result of irresponsible breeding over the years.

More and more dogs are being born with disabilities.

Years of breeding for appearance have wreaked havoc on our poor dogs' healths, and many breeds are now predisposed to suffer from severe, and often life-threatening illnesses and disabilities.

So many breeds are predisposed to develop these genetic defects...

Breathing issues, heart defects, spinal defects, blindness, skin problems, and epilepsy are just a handful of problems our pure-bred pooches are suffering from.

And dwarfism is a growing issue in certain breeds.

Though it may look adorable, and is the main physical trait in breeds such as the Corgi, dwarfism in dogs is actually caused by a mutated gene which stunts the growth of bones.

And this mutated gene can even affect dogs that are bred to be tall...

Some larger pure-bred dogs are predisposed to develop the gene... The German Shepherd, in particular.

Cute little Ranger here is an example of this mutated gene - though he looks like a puppy at first glance, he is in fact 2-years-old.

Which means that this little pup doesn't age in the same way as other dogs do.

And he will likely spend the rest of his life looking like a puppy.

The mutated gene that the breed is predisposed to develop has stunted the growth of Ranger's bones, meaning he will spend the rest of his life considerably smaller than other dogs of his breed.

Ranger was bought as a seemingly normal German Shepherd puppy...

And his owner, Shelby Mayo, from Phoenix, Arizona, was quick to notice that Ranger wasn't growing at the pace of a regular German Shepherd. Shelby explained to Metro, "When we originally got Ranger from the breeder, he was smaller than all his other littermates, but we figured that was because he had a parasite called Coccidia."

But, sadly, the problems continued long after the parasite was eradicated...

He quickly went on to develop a different parasite, and even developed a serious infection. "At the same time, we also discovered that Ranger had a large infection on his neck," Shelby said, "We were eventually able to get the infection under control, fast forward a few months later we were finally able to get rid of the second parasite."

But Ranger was still unusually small for his age...

And the vets had their suspicions. ''During this time Ranger remained very small, the vet had suspected that he may have Pituitary Dwarfism, a genetic mutation. But we were still skeptical as this condition is very rare."

His health continued to deteriorate. "After a few more months we got him neutered and that's when we started to see big changes. He lost his appetite, started to lose weight, lost almost all of his fur, and had extremely dry and flaky skin."

It turned out that dwarfism wasn't the only health issue poor Ranger was suffering from...

But after an official diagnosis...

Shelby was able to get Ranger the medical attention he needed. "Our vet checked his thyroid levels and sure enough he was low, this can cause hair loss and a loss of appetite. After getting Ranger on Levothyroxine and using this soap his fur grew back and the dryness went away."

Because, despite his condition, Ranger is living his life to its fullest, and has even become famous, with 67,000 Instagram followers. ''He healthy and happy as can be as of now and loves jumping around and playing with his ball and squeaky toys with his two sisters Hazel and Jessie."

And, though he may never look like a regular German Shepherd...

With the right medical care and attention, Ranger will be able to live out his life happily like any other dog. As for the cause, Shelby believes that it is simply a result of his genetics, and has insisted that, as a responsible dog owner and breeder, she will not be breeding him. For more adorable dog content, keep scrolling...