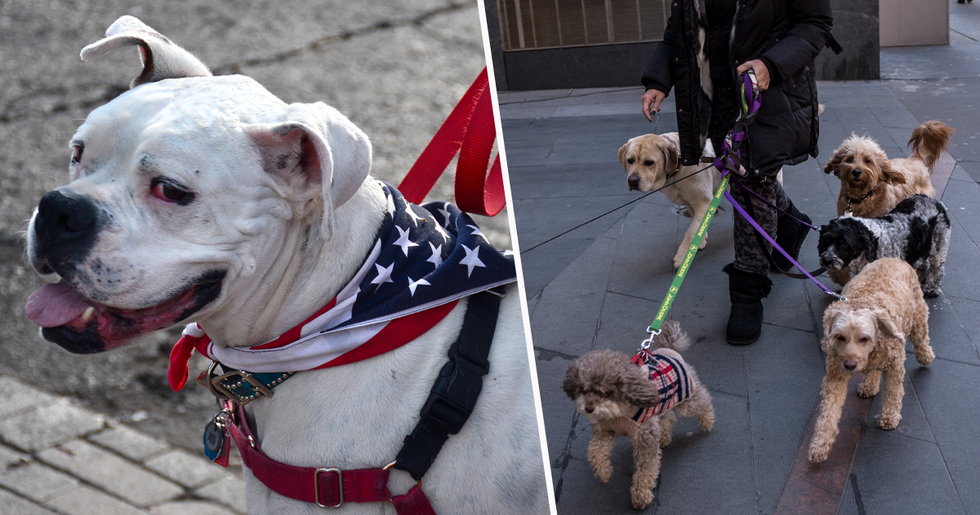 Germany has just passed a new law that orders dog owners to take their pets on hour-long walks... twice a day.

Is this a step in the right direction?

A dog is for life, and not just for Christmas.

But it is a sad reality that many dog owners forget this...

And way too many dogs spend their lives not receiving the treatment that they deserve.

This doesn't mean that their owners are necessarily being cruel and neglectful...

But factors such as overindulging and spoiling a dog can result in a stressful and unbalanced lifestyle.

And they need to be treated as such.

But the biggest thing that most dog owners are guilty of?

Is not walking their dogs enough.

Every dog, no matter their size, needs to be walked regularly...

And it has even been proven that walking a dog regularly improves their physical and mental wellbeing.

It is unbelievably bad for a dog's wellbeing if they don't get walked...

And it can quickly lead to boredom, aggression, frustration, and destructive behavior... which isn't what any dog owner wants.

The benefits of being walked are endless...

And sociability is one of those. It is super important for a dog to be socialized around other dogs and walking is one of the best ways to achieve this... especially from being a puppy.

Exercise is vital in a dog's day-to-day life.

Dogs are energetic animals and they need to burn off energy every single day. If they don't, bad behaviors can quickly take over.

Exercise also prevents a dog from putting on weight...

And we all know that an overweight dog is an unhappy dog!

Just imagine being cooped up indoors for weeks at a time...

With no access to fresh air, sunlight, or exercise. Enough to drive anybody crazy, right? Well, that's exactly how a dog who doesn't get walked feels... and it's just downright cruel.

If a person doesn't have enough time in their day to walk a dog...

Then they shouldn't own one. I know that sounds harsh, but it simply isn't fair on the innocent dog if the owner isn't willing to take the appropriate time out of their day to tend to their needs.

Dogs aren't just there to be cuddled and played with...

And it's about time that people begin to realize this.

Well, it seems that Germany is fully on board with this fact...

And their new law will benefit dogs all around the country.

German dog owners will now be ordered by law to take their pets on hour-long walks...

Twice a day, every day.

Rather than a quick 10 minutes around the block. She said the law is based on evidence that many of the 9.4 million dogs in Germany are not getting enough exercise on a daily basis, the Guardian reported.

Klöckner also added it has emerged that dogs need a "sufficient measure of activity and contact with environmental stimuli" per day.

"Dogs are not cuddly toys. They also have their own needs, which need to be taken into account," she said.

The new law also requires dogs to not be left at home alone for long periods of time...

Keeping dogs tethered or on a lead for a significant amount of time could also be banned.

Dog owners all around the world have been sharing their opinions on the new German law...

And even though many agree with the new rules on dog walking, many feel it is a little unnecessary.

Some argued that different dog breeds have different needs...

And some dogs, especially elderly ones, aren't capable of going for 2 hour-long walks a day.

Some have clearly been doing their homework...

And it's clear that many believe that the new law is a little bit strict.

Never the less, it's a step in the right direction...

And all dogs deserve to be exercised regularly and to live happy and healthy lives. Make sure to keep on reading to learn about the overweight golden retriever who got given a second chance at life thanks to a kind vet...