He watched the video “over and over again," and even zoomed in to get a closer look, as he couldn't believe his eyes. | 22 Words 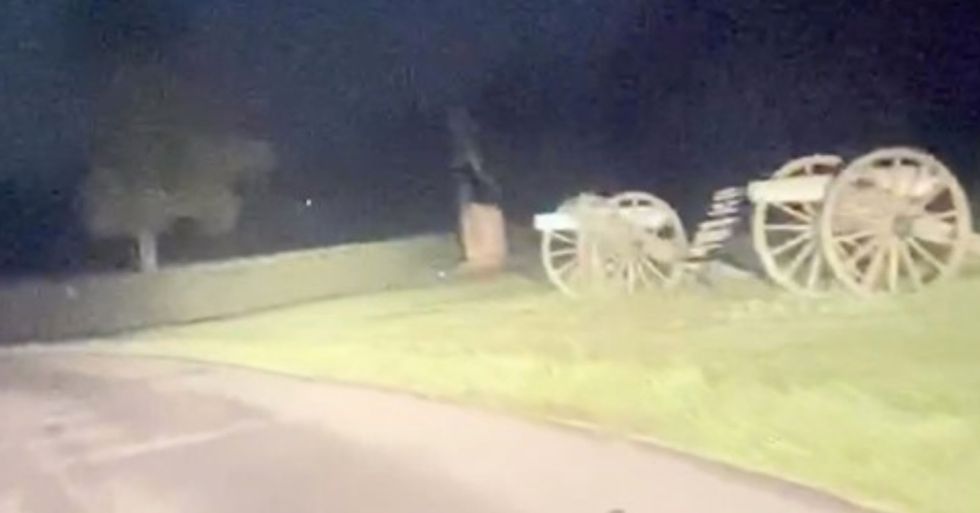 Gettysburg 'Ghosts' Run Across the Road in Bone-Chilling Video

Ghosts and the paranormal have always fascinated enthusiasts and experts alike, and the latest bone-chilling video, shared by a family after taking a trip to Gettysburg, will leave you questioning everything...

And we're not talking about a Scooby-Doo, 'man behind the mask' kind of ghost...

We're here for the real thing.

After taking a trip to the historical battleground of Gettysburg.

Whether you're a sceptic or a believer, there's no doubt you've questioned the possibility of paranormal beings at least once or twice.

And if you said no, you're lying.

There have been countless cases of paranormal activity here in America, and a lot of people seek the help of online forums, like Reddit, to ask for advice.

Are these proof that there's life beyond the grave?

I don't know what people expect from abandoned asylums...

They're obviously going to be haunted.

"Very old hotel. These pics were sent to me by a bartender that works there. Pretty awesome if you ask me."

Some pictures just shouldn't be uploaded to the internet...

And this is one of them. Nobody wants a corpse bride hanging off of their shoulder.

"I'm the girl in the foreground, I was there at 6 pm, so the sun had gone down, I took a picture with my friends and went home."

"Later I realized that a too pale figure was looming that was not there when I looked. By the way, the photo was taken in a medical school, inside a hospital, near the morgue." I'd demand to be homeschooled from now on.

"I am a photographer and I took this photo with my phone late at night from the window of my new apartment."

"I didn't think much of it until the day after when I edited it for my Instagram account.. Something was "wrong".. I took this photo around 1am and the streets were completely empty.."

This is a little more comforting...

Even though it still gives me chills.

Most users thought this was a picture of a cat in the window...

But if you look closer, there appears to be some sort of face.

One user wrote: "We can't see the rest of your house and light sources so we cannot help much. Remember even a bug close to a light source can cast a huge shadow." While another responded: "Don't think that's a bug 👀👀"

One user wrote: "And I might add the face does not look friendly."

"What do you think of this? Taken at an apparently haunted mental asylum."

One Reddit user pointed out something pretty consistent with these kinds of pictures...

"The thing about ghost photos is that no one ever takes a super clear image of anything that could be a ghost. When people show pictures of 'ghosts' they all tend to have the same profile, random shot (hardly ever taking another shot in the same place again), in a fairly low resolution (a lot of the time the resolution of an old 110 cartridge film is higher then what people take pictures in with mobile phones), with a basic flash, in a JPEG format (normally set to standard, which is great for taking selfies and portraits, not so good for trying to photograph ghosts), and with settings in automatic." He's got a point.

One of the latest paranormal occurrences was captured by a family in the battleground of Gettysburg.

A man says he captured video footage of the ghosts while taking his family to visit the famous Civil War battle site.

The forty-six-year-old said he took his family “to learn more about the history of the Civil War and see the old battleground where the Gettysburg Address was given."

He had seen a few shapes “the size of humans," and decided to record...

“It was scary, it was crazy. My uncle got so scared he rolled up the window," he said.

He watched the video “over and over again," and even zoomed in to get a closer look, as he couldn't believe his eyes.

“It was really exciting, but I also got this strange, ominous feeling, like something was telling me to go back there," Yuelling said. "I couldn't go to sleep but I was creeped out, so I didn’t go."

“I always questioned the validity of those ghost videos you see on TV, I was always pretty disbelieving," Yuelling said, adding: “I believe everything now."

Many have expressed their skepticism of his video after uploading it to Youtube.

What do you think? Keep scrolling for more unbelievable ghost stories...