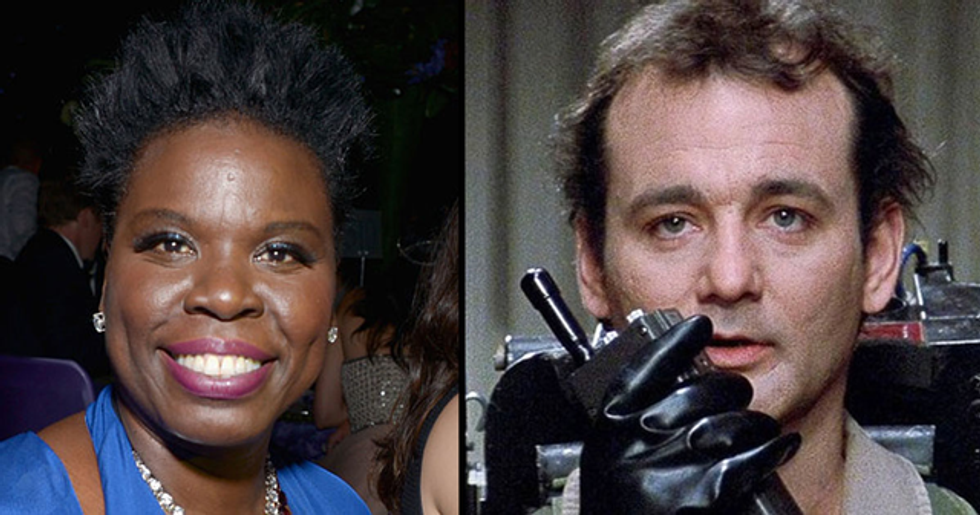 For many, the original Ghostbusters was the film of their childhoods. Starring Bill Murray, Dan Aykroyd and Harold Ramis, the movie chronicles three eccentric paranormal detectives, determined to catch ghosts preying on New York City.

The movie was so beloved that it inspired a 2016 remake - the only caveat being, the cast was pretty much all-female. It starred such names as Kristen Wiig, Melissa McCarthy and Leslie Jones. For many, this caused uproar, with an abundance of internet trolls claiming it was "ruining childhoods."

Well, there's been recent news of another Ghostbusters reboot, which is currently in the very preliminary stages. While we don't yet know any information about the cast, it's assumed it's unlikely to be another women-centric affair. One actress from the 2016 remake has a pretty strong opinion on the up-and-coming movie - and she wasn't afraid to share her views on Twitter.

The original Ghostbusters is a total classic.

The 1984 fantasy-comedy was the highest-grossing comedy film of all time after its release. It's still a beloved movie today, holding a nostalgic place in many people's hearts.

The three men played the co-owners of a New York based ghost catching business, who have to save the world from the paranormal threats.

All while doing some excellent dancing.

The charming eccentricity of the movie made it both a popular and commercial success.

The movie was so beloved that it inspired a 2016 remake.

But the reboot came with a twist - the ghostbusters of the title were all played by women.

Here are the four main actors at the film's premiere.

From left to right, we have Melissa McCarthy, Lesie Jones, Kate McKinnon and Kristen Wiig, who played four women tasked with catching the ghosts and saving the city.

The poster was a part of the movie's premiere, and stayed proudly displayed above Hollywood's Chinese Theatre afterwards.

The choice to opt for a female cast was controversial.

Many viewed the casting as a "gimmick," and on the day of the trailer's release, it received 13,800 dislikes on YouTube compared to just 12,000 likes.

This is in spite of the fact the majority of the original crew were involved in the movie.

Here's original ghost buster Dan Aykroyd attending the 2016 reboot's premiere. He told the Hollywood Reporter he was "delighted by this inheritance of the Ghostbusters torch by these most magnificent women in comedy"

A small subset of trolls were determined to minimise the film's potential success, and set about giving it extremely poor ratings on as many internet platforms as possible, in spite of never having seen the film.

Much of the film's initial criticism was called out for being misogynistic.

Others felt the film's haters were simply overly protective of a movie which had meant a lot to them in their childhoods. Naysayers were concerned that the remake would be in some way to the detriment of the original.

In spite of the internet criticism, the film was a (moderate) success.

The film garnered primarily positive reviews, praising its high levels of fun and ability to break free from its extremely famous original.

And recent reports have revealed there's another remake in the works.

The sequel, which is set to come out in 2020, reportedly features a younger boy and girl as its two main ghostbusting characters.

The film will be directed by son of the original director, Jason Reitman.

He's promised it will follow the story line of the original films, although will be set in the present day.

But not everyone is celebrating news of the up-and-coming film.

In fact, some people are fairly angry about it. At least the remake is following in the controversial tradition of its predecessor!

Star of the 2016 remake, Leslie Jones, was one of the biggest voices of dissent.

She took to Twitter to criticise the remake, believing it would undermine the 2016 version and move it out of the Ghostbusters universe.

@SarahBillsMafia @melissamccarthy @paulfeig @SonyPictures So insulting. Like fuck us. We dint count. It’s like some… https://t.co/RWdssrvLaF
— Leslie Jones 🦋 (@Leslie Jones 🦋)1547936000.0

Her tweet this weekend garnered a lot of online attention. In it, she claimed the new remake was an insult to the 2016 movie, and the female casts in general.

She even compared the actions of filmmakers to a certain POTUS.

Jones claimed the remaking of a film with a male cast was a Trump-esque thing to do.

One pointed out the factual inaccuracies of Jones's Tweet, plus criticised the 2016 remake as "objectively bad and unfunny."

Others had a more... direct approach.

Jones received a barrage of hate for her opinions, with many directly attacking and insulting her.

Of course, she had a perfect response to them.

This tweet, which Jones retweeted, called out the haters for being "trolls." Indeed, it does seem the enormity of the hate she's received for her opinion seems a little over the top.

It doesn't seem like Jones is about to back down.

After her appearance in the 2016 film, Jones faced an enormous amount of online hate - much of it believed to be racially motivated.

Some Twitter users stood up for Jones's recent comments.

One of her biggest advocates is director Andrew Todd, who retweeted her emotional critique alongside his support for her views.

Jones reached out to thank him.

She stood by the message of her original Tweet - although did concede that she perhaps used overly aggressive language to get her point across.

It's refreshing to see a woman refusing to back down in the face of adversity.

While some of what she said was perhaps a little ill-thought-through, she's certainly entitled to her feelings. Plus, the amount of hate she and her Ghostbusters cast mates received would be enough to fray anyone's temper.

However, her criticism of the upcoming film was not without issue.

It appears Jones believed the next reboot will be a remake of her 2016 Ghostbusters. But the director has promised it'll actually be a sequel to the two original Ghostbusters films.

Andrew Todd pointed this out in a kinder way.

At least the upcoming film isn't just another all-male cast. We can totally see how that would be problematic and insulting to the 2016 reboot.

Todd made an interesting point about the newest film's casting choices.

I wonder how all the Ghostbros rejoicing that they're getting a "real sequel" will feel when they realise the main… https://t.co/epOKrNy7gz
— Andrew Todd (@Andrew Todd)1548008205.0

Because this film won't exactly be true to the original, either. In fact, as Todd puts it, "half of [the cast] are, perish the thought, GIRL children, with cooties and everything."

If the haters of the 2016 film are anti-remakes in general, they won't be a fan of the upcoming sequel. But if the issue was simply that they couldn't get on board with a female cast, the claims of misogyny will have been proven right.

The internet already has its suspicions as to which is actually the case.

We have to say, the idea that a film which came out thirty years later could "ruin" an original (and a classic) does seem a little absurd.

We can't wait to see what happens next.

The run-up to the release of the 2016 Ghostbusters was just filled with drama. With fans already so impassioned, we can only see the 2020 film following that same trajectory - and we'll be watching closely.